Switzerland Sucks up to Iran for Cheap Gas 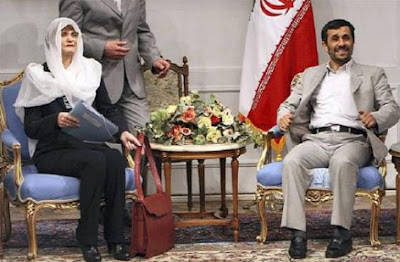 Shame on You, Switzerland   (by Tiberge at the Brussels Journal)

An article from AJM (Alain-Jean Mairet) reveals the collaboration of Swiss Foreign Minister Micheline Calmy-Rey with Iran. When I first saw the photo above I had trouble grasping who or what that was on the left. But it is indeed Mme Calmy-Rey, looking like a mummy with tissue paper on her head and concluding a deal with the president of Iran to purchase cheap Iranian gas.

The American Embassy in Bern has expressed “disappointment” over the deal and has told the Swiss authorities that this type of agreement sends a “false message”, at the very moment when Tehran “continues to defy the Security Council resolutions ordering the suspension of programs for the enrichment of uranium.” [...]

What incredibly bad timing. See the full article for more information and a link to more photos of Calmy-Rey allowing herself to be shamelessly exploited by the Iranian media. She is a Swiss Socialist with a history of Islamophilia. I always wonder about women like her with their half-assed attempts at dhimmitude. 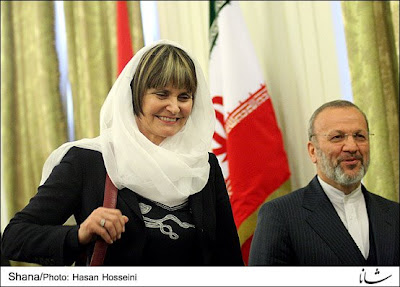 I mean really, who does she think she's kidding? As a foreign representative she could have chosen not to cover her head at all, and the Iranians would have accepted that. Just having her there giving them publicity lends them credibility they are desperate for. 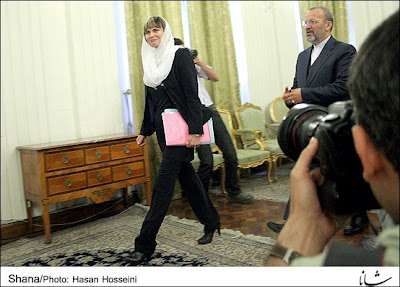 But she chose to cover her head as an appeasement gesture by a non-muslim. But if she really wanted to comply, she would have to do much more. Look how she is dressed: her scarf is transparent, her hair is showing, she is wearing a tight fitting pants-suit with high heels. By the standards of the Iranian government, she is a WHORE. Iran has strict dress codes for women, that they enforce via police action, increasingly with violence.

If she were an Iranian woman, she could be arrested and beaten and thrown in jail. Of course as a diplomat she takes no such risk. She just makes it easier for the misogynists that brutalize women to continue doing so by lending them legitimacy.

Women's rights in Iran; the right to be a penguin

This truly sickens me. On the other hand, the Swiss are going to get what they deserve: Utter destruction of their wimpy culture. They are genetic and cultural has-beens.

I think this bitch just likes the pretty scarf.