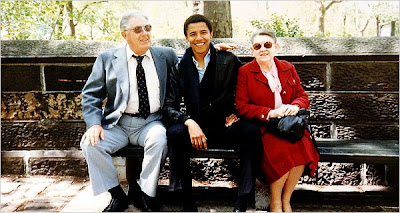 Looks like the white grandmother gets thrown under the bus once more:

The link above is to Michelle Malkin. You can follow it to find out more about his latest remark about his white grandmother, who raised him.

He seems to want to equate his grandmothers fears of black men on the street, expressed privately to family members, as being the same thing as Jeremiah Wright's racist public sermons at a powerful and politically active Chicago Church. He wouldn't reject grandma, so why reject Wright too?

But Wright is a much more public figure, and we certainly hear more from and about him than we do of grandma Dunham. In fact, some say she is hidden away in Hawaii. 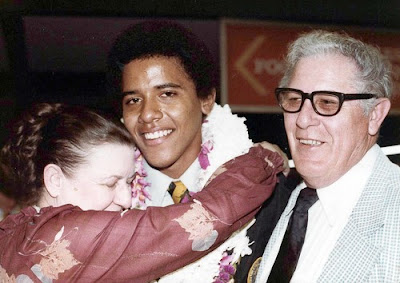 This article by Andy Martin at NewsMax, from March 2007, asks questions about why we don't see his white grandmother, and why a step-grandmother from his father's side of the family in Kenya is promoted as his granny instead:

CHICAGO -- If anyone else running for president locked his granny away and refused to allow her to be seen, would the media complain? You betcha.

But America's media have supinely allowed Barry Obama to pretend he has no white relatives. He has paraded his step-grandmother in Kenya, who never saw him until the 1980s, as his "granny," and locked the grandmother who actually raised him away in a closet.

Barack Obama is one of the most racist politicians in America today. And we let him get away with it. We are afraid to confront Obama's reality, so we pretend that reality is not there, even though it is staring us in the face. Anyone remember "Miss Lillian?" Or Barbara Bush? Or Bill Clinton's mom, drinking, gambling card-playing gal that she was?

Noone else but Obama could get away with pretending that his paternal grandfather's second or third or fourth wife was his "granny" when she wasn't. [...] 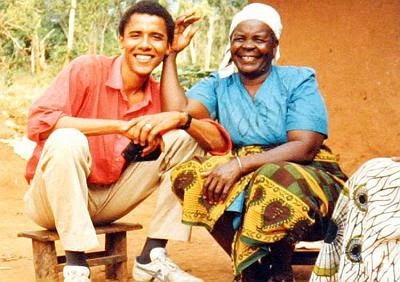 Great photo, but is the lady even his real granny?

But the "segregation" of Madelyn Dunham, Obama's white grandmother, and only real grandmother, has to be one of the cruelest and most mendacious political kidnappings this nation has ever seen.

Mrs. Dunham lives alone in the same apartment where she has lived for many years. Thus, it is reasonable to assume she is not incapacitated or an invalid.

Granny Dunham told the New York Times she was not well enough to speak, but in reality the Obama campaign maintains Stalinist "control" over potential interviewees. Obama's minions tried to control access to Obama's friend who was recently released from prison. Since he became a candidate for U.S. Senator, Obama has locked his white relative away in his racist closet. [...]

Well I imagine she IS pretty old, and perhaps not up to the publicity. Though as the article points out, old age hasn't stopped a slew of other grannies of presidential hopefuls. And if she doesn't want to talk, doesn't she have friends or relatives that do? At the very least, there probably IS a story here, even if none of those involved want to talk about it.

I'm not saying that if she were interviewed, that she wouldn't agree with him or support him. She may agree with him completely, but has anyone even really tried to find out what she thinks? It's the lack of questioning, the deference to the Obama campaign by so-called journalists, that I find disquieting. Why isn't he treated like any other candidate?

Clinton likes to keep her mom out of the spotlight too, but she's not totally invisible; she appears in public with Hillary sometimes, and she once did an interview with Oprah. And while I'm not fond of Clinton, I have to admit I don't think she's ever thrown her mom under a bus.

Barack Obama: My Grandmother Is the "Typical White Person"