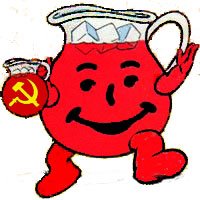 Who's "drinking the Kool-Aid" now? In Belgium, it looks like the Muslim population is helping to pass out the cups. Paul Belien at the Brussels Journal reports on the recent elections in Belgium, where the socialists, aided by Belgium's large Muslim immigrant population, made huge gains:

In last March’s local elections in the Netherlands the immigrant vote tipped the balance in favour of the Socialists. The same phenomenon marked yesterday’s local elections in Belgium’s major cities. In Antwerp the Socialists became the largest party. They jumped from 19.5% to 35.3% of the votes, winning 22 of the 55 seats in the municipal council – a gain of ten seats. Seven of the Socialist councillors, almost one third of the total, are Muslim immigrants...

The gains were made in cities with large immigrant populations, against Belgium's conservative party, VB (Vlaams Belang). There is a reason that the immigrant vote has jumped so dramatically:

... The VB also stagnated in other cities with large numbers of immigrants, such as Brussels, Ghent and Mechelen. After the 2000 local elections, in which the VB gained considerably, the Belgian regime extended the vote to immigrants for municipal elections and passed the so-called “Quick Citizenship Bill.” The latter grants hassle-free Belgian citizenship virtually upon demand to every individual who has lived in the country for three (in some cases only two) years, which enfranchises them in the general elections, too (voting is compulsory in Belgium). These measures were introduced with the specific intent of countering the VB.[...]

This reminds me of what our own socialists here in the USA - the Democratic Party - are trying to do; change our laws to give the vote to anyone who has lived within our borders for even a short period of time.

But more shocking still, is how Belgium socialists, in their grab for power, are willing to run Muslim candidates who, back in their native countries, were responisble for killing socialists:

Ironically, as I pointed out earlier, in their efforts to counter the indigenous “racists” and “fascists” of the VB, the Socialists and Christian-Democrats do not hesitate to put far-right Muslim candidates on their electoral lists. Some of them, such a Murat Denizli, a member of the Turkish racist and fascist organization Grey Wolves which assassinates Socialist councilors at home, have now become Socialist councilors in Belgium (Mr Denizli was elected for the Parti Socialiste in the Brussels borough of Schaarbeek).

On 10 September I wrote that European politics will swing dramatically to the Left in the coming decades, owing to the growing influence of an immigrant vote eager to retain and expand the welfare benefits. Another trend, however, is also visible. [...]

It's precisely that sort of thing that most unnerves me about the left, their willingness to embrace as allies the very people who would kill them. I call it their "tendency to suicide". Once the left succeeds in destroying their political opposition, they will find that their Muslims allies have no interest in socialism, or any reason to further support socialists.

We have seen this happen in other countries, like Iran. Yet the left seems totally blind to it. In another article, Belien gives a further breakdown of the election results:

Since last Sunday’s local elections in Belgium more than one fifth (21.8%) of the municipal councillors in Brussels, the capital of Europe, are immigrants of non-European origin. Most of them are Muslims, and most of them have been elected as Socialists. The non-European immigrants vote overwhelmingly Socialist, owing to the fact that many of them are rentseekers who migrated to Western Europe attracted by the subsidies of its generous welfare states. The immigrants have become the electoral life insurance of European Socialism. [...]

One of the new Muslim Socialists who is Turkish, wants to demolish the Brussels monument for the genocide of the Armenians. According to him the genocide never happened.

The rewritting of history has already begun. It's been said that it's the victors of war who write our history. Are we witnessing a war, an invasion of Europe, that will be won by Muslims without having to even fight?

We have seen videos on TV of Muslim Jihadis beheading infidel hostages. Less attention has been paid to the fact that Muslims are beheading entire nation states. Although this is happening in slow motion, it is no less dramatic. Historically, the major cities have constituted a country’s “head,” the seat of most of its political institutions and the largest concentration of its cultural brainpower. What happens when this “head” is cut off from the rest of the body?

In many countries across Western Europe, Muslim immigrants tend to settle in major cities, with the native population retreating to minor cities or into the countryside. Previously, Europeans or non-Europeans could travel between countries and visit new cities, each with its own, distinctive character and peculiarities. Soon, you will travel from London to Paris, Amsterdam or Stockholm and find that you have left one city dominated by burkas and sharia to find… yet another city dominated by burkas and sharia.

For some reason, this eradication of unique, urban cultures is to be celebrated as “cultural diversity.” [...]

Political Correctness and Multiculturalism:
The New Tools of "Stealth" Socialism?

[...] Cultural Marxism — aka Political Correctness — and Islam share the same totalitarian outlook and instinctively agree in their opposition to free discussion, and in the idea that freedom of speech must be curtailed when it is “offensive” to certain groups. Former Muslim Ali Sina notes that “there is very little difference between the Left and Islam. What is lacking in both these creeds is the adherence to the Golden Rule. Just as for Muslims, everything Islamic is a priori right and good and everything un-Islamic is a priori wrong and evil, for the Left, everything leftist is a priori oppressed and good and everything rightist is a priori oppressor and evil. Facts don’t matter. Justice is determined by who you are and not by what you have done.” [...]

The Welfare State: The Root of Europe’s Problems

[...] Americans say “God bless America” or “In God we trust.” Europeans giggle and think it’s funny or silly. But we have some buzzwords of our own. “Solidarity,” for instance. Is the welfare state, on some deep, subconscious level, a substitute for God? An omnipresent state instead of an omnipresent God? Europeans lost belief in God in Auschwitz and the trenches of WW1. We no longer trust in God, so we put our trust in the welfare state, to create a small oasis of security on a continent that has had such a turbulent history. The irony is that it worked well only in countries which used to have a strong religious base, a Protestant work ethic and sense of duty. As that religious heritage gets weakened, so does a necessary precondition for the welfare state. [...]