Amusing Interior Designs of the 60's and 70's

Some of the horrendous ways that people used to decorate their homes are now quite funny to look back on. What WERE they thinking? A site on Flickr called Your Swingin' Pad offers 87 samples from an old publication. I'll show just a few here: 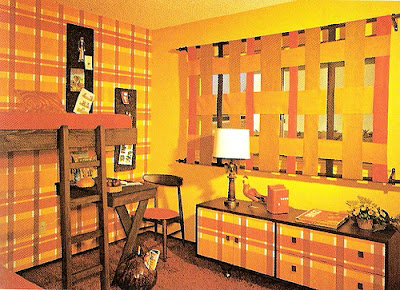 The link takes you to a page of photo thumnails. At first I thought I wouldn't click on all of them, but only what appeared to be the worst ones. But as I browsed through them, it was a real trip down memory lane. Many of these furnishings and fabrics I had seen in different times and places throughout my life. 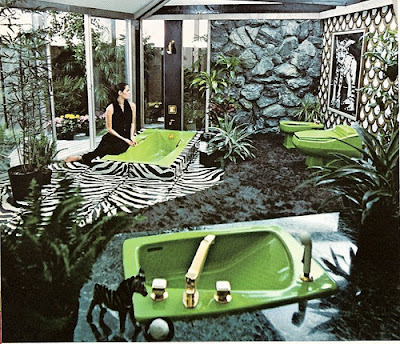 Some of them were real freaky, like this bathroom. Is that really black shag carpeting? And those windows with no curtains - what did the neighbors think? 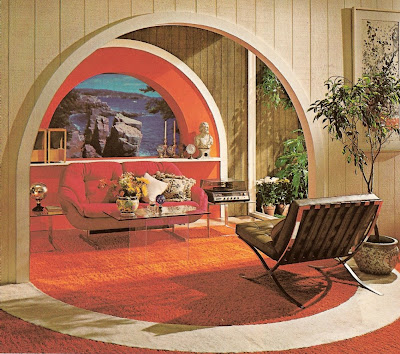 Not all of them were ugly. Even the ugly ones sometimes had components that were good or interesting. 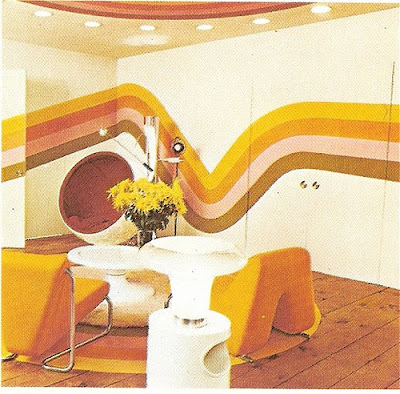 A lot of the mod, impractical, uncomfortable furniture is recognizable from many garage and yard sales I've seen, with people trying to get rid of the junk. Other pieces have become much sought after "classics".

Yet there is no denying that many of these "designs" were just plain painful to look at. Here's a few, with comments people made about them: 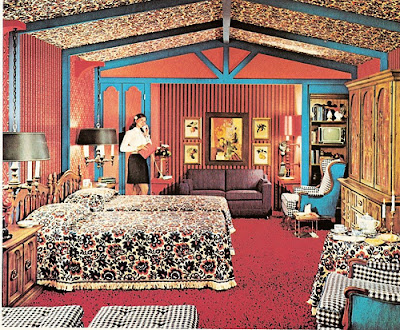 I could imagine waking up in this room and saying,
"Damn! It wasn't a dream..." 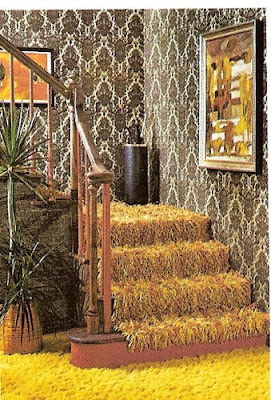 For those times when you want to discourage your guests from going upstairs. 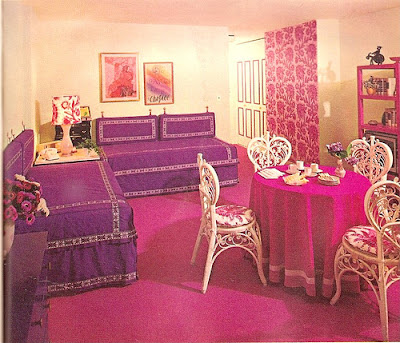 The girlie force-field emanating from this one is pretty strong!

I'm having a hard time deciding which was worse, the sixties or the seventies. 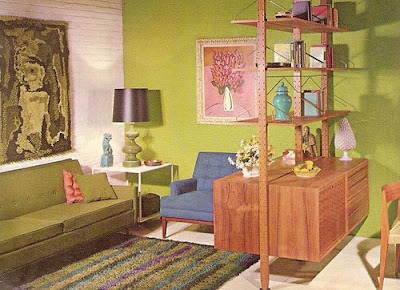 Even funnier that the photos, is some of the catty commentary left in the comments section below each photo. That is the primary reason that I ended up going through all eighty seven of them. Some of the photos there have embedded comments in them too, that appear when you put the mouse cursor over certain objects or people in the photos. It was great fun! Have a look if your tempted: Your Swingin' Pad.

What were people thinking ?

They were thinking that they were living in a time when a small group dominated everyone else --- and by rejecting conservative familiarity and NEWNESS everywhere and in everything a change in thinking would come.

Design in the 50's 60's and 70's had a VERY serious intent. It was during a social REVOLUTION.

Social Revolution? Yeah, sorta. But I think the rampant use of recreational DRUGS explains a lot more.

There certainly was a boldness in the 60's and 70's, daring to use bright colors and fabrics and textures that were never used that way before.

Oh well. Experimenting can be good. And fun. Live and learn.

Hi- Where did you find your images? They're fantastic! ...minus the shivers the shag carpet gives me..

"Miss Retro Modern" scanned them from old interior decoration magazines from the 60's and 70's. I fine Blast from the Past.

It's worth visiting her web pages on Flickr, they're Groovy, and the commentary is hilarious.