Hillary says she's a "Progressive"; what it means 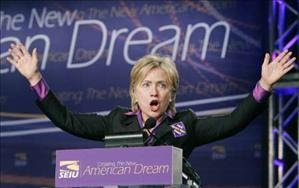 From Matt Mayer at Townhall.com:
Liberals Are Now Progressives (Again)

When Hillary Clinton recently discarded the term liberal for the term progressive, it reminded me of the famous question of whether a leopard could change its spots? The answer, of course, is no. A leopard is genetically a leopard as a liberal is philosophically a liberal whether she is called a liberal or not.

Nonetheless, it is important to know what a progressive is since that is now the preferred term of the left. It comes from the Progressive Era. One of its intellectual and political leaders was President Woodrow Wilson. The Progressive Movement's chief aim was to centralize power by eliminating those pesky little concepts of separation of powers and checks and balances and escape the confines of a fixed constitution so that America could progress (not that it hadn't up to that point as evidenced by the abolishment of slavery and its rise as a world power).

Wilson despised those constitutional mechanisms because they prevented government from "proceeding" in accordance with the will of "an outside master." Wilson believed that the Constitution should be a living document. [...]

Yeah, a "living document". That means you ignore precedents, and interpret it to mean whatever you want it to mean. And when that becomes impossible, you start making changes:

[...] The aim of the Progressive Movement succeeded as it gave birth to the rise of the administrative state and the consolidation of power in Washington during the New Deal and Great Society periods where many new rights and federal powers were suddenly found into the Constitution. This couldn't have happened had the progressives not succeeded in amending the Constitution in 1913 first to provide for a source of funding the administrative state (the federal income tax via the 16th Amendment) and then to eliminate any check the states had on the power in Washington (electing senators by popular vote instead of by state legislatures via the 17th Amendment). When states lost their ability to reign-in recalcitrant senators with threats to appoint someone else after his term ended if they voted to expand federal power or push costs to the states, the principle of federalism suffered a horrible blow. Given the failure over the last thirty years to reduce the power in Washington, that blow may have been deadly.

(bold emphasis mine) those changes by "progressives" are, IMO, where things started to go wrong; where the rot began that has created our growing Imperial Federal Government.

The article also touches on the Dark Side of the Progressive movement, such as it's embracement of concepts like Eugenics, which became also became popular with Big Governmetn groups like the NAZIS.

[...] This dark side of the Progressive Era, thankfully, came to an end. Its belief that there are those among us who know better and shouldn't be constrained by a fixed Constitution and limited government, unfortunately, did not. To escape the baggage of the term progressives, they started calling themselves liberals. Today's liberals, like yesterday's progressives, believe wholeheartedly that the answer to all of societies problems lies in the use of government by enlightened leaders to effectuate progress and view constitutional constraints as archaic and quaint. [...]

Constitutional restraints as "archaic and quaint"? Does that not sound like Hillary Clinton and many of today's Democrats?

There is a world of difference between genuine liberals, who are easy going live-and-let-live people, and progressives like Hillary who believe in an enlightened elite who need to be unhindered by the constraints of the rule of law so they can "progress". Isn't the latter like what the Kings and Queens of old did? Isn't that why we have constitutional constraints?

The whole article isn't very long, but is well worth reading.

From Born Again Redneck:
Liberals Are Now Progressives (Again)
Here are some excerpts by Pat from the same article, with his commentary at the end.

From Neal Boortz:
WHY DEMOCRATS JUST ABSOLUTELY HATE BEING CALLED .....