A Really Cool Political Map of the USA

Are you bored with usual over-simplified Red vs Blue scenarios? Then check out THIS political map, which divides the country up into 10 political cultures: 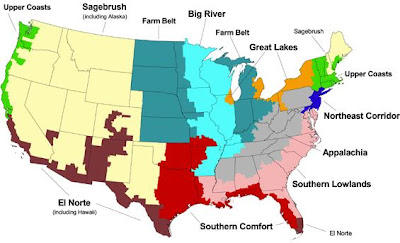 The map is from an on-line article called Beyond Red and Blue. A brief description of each area:

* Northeast Corridor: the richest, best-educated and most densely populated region of the US. A traditionally Democrat-leaning area, it delivered 62% of the vote to Al Gore in 2000. That’s better than any Democrat in any region since LBJ.

* Upper Coasts: anchored by Boston (on the east coast) and San Francisco (on the west coast), this region is relatively affluent and well-educated. Arguably more liberal than the Northeast Corridor, it is less reliably Democratic: third-party candidates do well.

* Farm Belt: has the smallest non-white population, with lower than average population growth. Ranks first in percentage of people who finish high school, but don’t get a higher education. Solidly Republican.

* Big River: has been the most closely contested area in presidential elections for over 30 years. And the region isn’t easily wooed, never giving either candidate more than 55% during this period.

* Appalachia: the poorest and most rural region, but catching up economically. Showed a dramatic swing towards the Republicans in 1980 and stayed that way ever since.

* Sagebrush: named after the anti-bureaucratic Sagebrush Rebellion of the 1970s, this region occupies almost 50% of the US land area. The fastest growing region, it was also Al Gore’s worst region in 2000.

* Great Lakes: centered around Chicago, and suffering from population loss in smaller cities, it has Democrats chasing votes in more rural areas – the suburban counties have been tilting their way, anyway.

* Southern Comfort: fast-growing and average as to income and education, this was part of the ‘Solid South’ that squarely supported the Democratic party around 50 years ago. It has since turned into the most Republican region of the US.

* Southern Lowlands: the largest percentage of African-American voters, who reliably vote Democratic. This voting bloc is matched by some of the most Republican areas in the US, making it a swing area.

* El Norte: the youngest and most Hispanic region, it was carried by Gore in 2000. It is however not solidly Democratic, having recently sent conservative Republicans to Congress (from Florida and Texas).

A more detailed description of each area can be found here:

"The 10 Regions of US Politics"

One of my favorite areas is also where I live: Sagebrush. Here is the detailed description of that region:

Occupying about half the land area of the United States, the Sagebrush region includes all or part of 17 states -- all of them a long way from Washington, DC. Most are in the west, but the region also includes like-minded parts of New Hampshire and Maine. The former is known as a libertarian stronghold (so much so that a national anti-government group called the Free State Project is trying to get its members to settle there and take over local politics); the latter distinguished itself as Ross Perot's strongest state in 1992.

This region is named after the Sagebrush Rebellion of the late 1970s, which centered on the resentment of western states toward regulations (particularly of the environmental variety) imposed by the federal bureaucracy. The Sagebrush Rebellion helped to flip nearly a dozen US Senate seats from the Democrats to the Republicans between 1976 and 1980, an advantage that has helped the GOP hold that chamber for most of the time since.

Surprisingly, the Sagebrush region is not among the most rural in the US. It is the fastest growing region, and though its wide-open spaces undoubtedly attract newcomers, most of them settle in booming cities such as Phoenix and Colorado Springs. It ranks first in the number of residents who are under 18, and first in the number of adults who have attended college but not obtained a bachelor's degree. In 2000, it was Gore's worst region, but only third best for Bush; in presidential races, Sagebrush customarily delivers the most votes to minor candidates, from Greens to Libertarians.

The patron political saint of Sagebrush is Arizona's Barry Goldwater, whose campaign against Big Government in 1964 was a launching point for the modern conservative movement, and, thus, the modern Republican Party. Though Ronald Reagan has never been a long-term resident of what we now call Sagebrush, he exemplified the region's mindset when he took the presidency in 1980.

More recently, Sagebrush has had to compete with Southern Comfort for the soul of the Republican Party. One difference between the two regions is that Sagebrush seems more ambivalent toward religious conservatism. Goldwater himself expressed disdain for Jerry Falwell and the Moral Majority during his last Senate term, and another senator from Arizona, John McCain, pretty much burned his bridges to fundamentalist groups during his 2000 presidential run. Vice President Dick Cheney, who once represented Wyoming in the US House, is a forceful voice for conservatism on fiscal and foreign-policy issues but seems less enthusiastic about advocating fundamentalist views on gay rights and other cultural issues. Yet the region is still represented by many Republicans in the moralist wing of the party, including Utah Sen. Orrin Hatch, a leader of the anti-abortion movement, and Colorado Rep. Marilyn Musgrave, the driving force behind a constitutional amendment to ban gay marriages.

Even in Democratic primaries, voters prefer candidates with more libertarian views (liberal on social issues, conservative on fiscal issues). It was Gary Hart's strongest region against Walter Mondale in 1984.

(bold emphasis mine) For the most part, it's my kinda place! Follow the links for more information about how this map was created, it's usefulness in following elections and political trends, and for more detailed descriptions of the different areas, and what forces are shaping and changing them.

Email ThisBlogThis!Share to TwitterShare to FacebookShare to Pinterest
Labels: 10 political regions in the USA, political map

Psychologically astute. My father (whose roots were in New Hampshire) wound up ranching in Alturas, CA and living part-time in Redding. All "Sagebrush" which I would call somewhat extreme self-reliance, except for the fact that places like Arizona are full of retired military officers who golf and depend for some of their money on Uncle Sam.

My brother, who continues the family business in L.A., has now created a branch in Mexico, and has cast social lot with his employees. For them, Catholics and recent immigrants (including other Latins such as Italians and French Canadians), it is "El Norte", and even though everyone is involved in manufacturing, it is a pleasure-loving approach to life.

So my dad found his way up to Northern California sagebrush like a salmon swimming upstream, to be among like-minded citizens, while my brother opted to melt into the new melting pot. I have more fun at his house than I did at those dour Thanksgivings in hard ranch country. I think if you traced it back further, you'd get to people who lived in the North of England and the Border country. In fact once in London, my father was called "very North Country" by an English lawyer who was being snobby. He called it, I think.