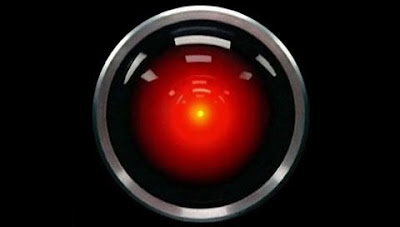 HAL the talking computer is here, just like in the famous Sci-Fi movie "2001: a Space Odyssey"! Well, ok, not REALLY, but at least this HAL won't lock you outside or kill you while you sleep! Ultra Hal is a fun HAL, and it's here NOW:

[...] Ultra Hal Assistant is your digital secretary and companion. He (or she depending on your character preference) can remember and remind you of appointments. He can keep an address book. He can keep a phone book, and even dial phone numbers for you! Hal can also run programs and recent documents on command. Hal can help you browse the Internet. He will offer you help with most of your Windows programs. Hal does all of this from natural language -- simply tell him or ask him something in plain English!

Hal has huge conversational database and can chat about anything at all. Hal will learn from every single sentence that you tell him and over time Hal will learn to like the same things you do, and to talk about topics you like to talk about. Ultra Hal Assistant even has built in speech recognition so that you can speak to Hal out loud instead of typing. Ultra Hal utilizes an advanced realtime 3D character engine from Haptek that delivers 3-D artificial human characters so convincing and engaging you could swear they were real. You can download the free trial version from this site. Find out whats new in version 6.1 [...] 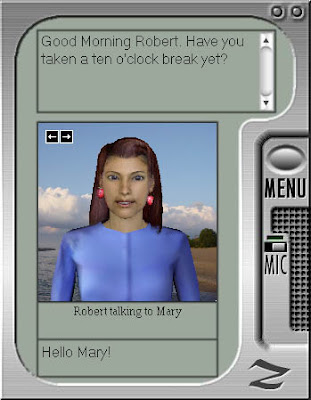 Now I have played with the Ultra Hal Assistant a bit... calling it intelligent may be a bit of a stretch... though that may depend on what your definition of Artificial Intelligence is. Hal really does have the capacity to "learn" things from you, and with time and training, it does give seemingly intelligent, even surprisingly clever, replies and comments.

How useful it will actually be remains to be seen. I'm not much of a chit-chat person when talking with real people; chit-chatting with a computerized Artificial Intelligence can seem like rather a waste of time, once the novelty wears off. But giving it commands to look for stuff on Google for you, look up the weather and read it to you, dial phone calls and such - are things some people may find useful. And as Hal learns from you, the chit-chat gets more interesting.

You can use the free trial version, but to buy it costs only $29.95. It can be used as the "brain" for other 3rd party software products. I have to say that, what's probably more impressive than what Ultra Hal does, is the potential for what it can become. It's a technology in it's childhood, about to grow up.

Remember that Arnold Schwarzenegger movie, The 6th Day? There is one scene where the Arnold character is at the home of a divorced friend. The friend has a female talk-bot on the screen, and they flirt with each other. The Ulta Hal program can work with a variety of 3rd party "characters" that function in much the same way. Check out this on-line, interactive, talking People Putty Demo by Haptek. There are even various plug-ins for Ultra Hal, including alternate voices, brains, speech engines, and animated faces and characters, even flirty sex-bot characters, precursors to the one in the movie. The future is closer than you think.

There are also third-party companies that make realistic "voices" that are compatible with Ultra Hal. One such company is called Cepstral, that makes really good sounding computer voices. You can download free samples to try out, they come with an easy to use text reader software program: www.cepstral.com.

The combination of these products will provide you with a near-HAL 2001-a-space-oddity type experience. It's pretty kewl... just don't plug it into your cryogenic sleep chamber when you got to bed at night. ;)

A HAL type project was implemented by NASA on the International Space Station in 2005:

Clarissa: a HAL type computer for the ISS?

Clarissa is capable of understanding multiple voices of astronauts, recognizing when astronauts are talking to each other and not to it, and can deal with ambient noises, etc. While efficient in those areas, she does not try to make conversation like HAL does.

I'd like to see Clarissa's voice comprehension used in Ultra Hal. Probably the best voice recognition software available to most of us on planet Earth would be Dragon Naturally Speaking 10, which is I believe, what Clarissa uses. The reviews I've read seem to indicate it's the most accurate commercial voice recognition software commonly available. DNS doesn't make idle chit chat with you like Ultra Hal, but it can be used for speaking commands to your computer, as well as taking dictation.

Older version's of Dragon's speech engine have been compatible with Ultra Hal, but it's unclear to me whether or not the latest speech engine in Dragon Naturally Speaking can also be used with it. I've read conflicting reports, some say yes, some say there is restrictions that prevent it.

I've found that Ultra HAL had some trouble understanding my voice, because it would hear it's own voice speaking in reply and think it was me talking. I eventually gave up trying to teach HAL to understand my speech, meaning I had to use the keyboard to communicate with HAL. It would be nice if Clarissa's technology could be added to HAL's, making it more of a hands-free experience. As it was, having to keyboard my responses to HAL was not very productive for me, because I could not do other things while I was communicating with HAL. I would love to chit-chat with HAL and teach it things, IF my hands were free so I could get on with other things I need to do. If I could verify that the Dragon 10 engine would work with HAL, I'd buy it. Being able to chat with HAL hands free, would be worth it.

HAL does have a "Brain" settings panel, where you can set it's learning parameters. You can actually deliberately teach it things, and see them reflected back to you in it's responses. Sometimes the replies it can give you really do seem intelligent and even witty. The Ultra HAL program won the 2007 Loebner Prize for artificial intelligence most able to pass for a human.

An on-line talkbot called Elbot won the prize in 2008. It's an excellent on-line talk-bot, but not available for download onto your computer like HAL is. HAL is the only one I know of that you can download and use on your PC.

If you would like to try to converse with an on-line version of HAL, you can do so here:

I think all of these things, artificial brains, faces and voices, are combining to become one of those Next Big Things. As these technologies improve, I think it's going to take off and be very BIG. If you want a taste of things to come, download the free trial version of Ultra Hal and play with it. I've had great fun with it.

Zabaware has a page listing bloggers who have reviewed Ultra Hal:

Read what bloggers are saying about Ultra Hal,
an artificial intelligence chatter bot

[...] Zabaware is hard at work developing the next version of Ultra Hal Assistant, which will be available in 2009. The new version will be a free upgrade to all Ultra Hal Assistant 6.x users and will include brain improvements and a new 3D graphics engine. Also in 2009 Zabaware will introduce cutting edge speech recognition and microphone technology, which will let you talk with Hal naturally without a clumsy headset microphone. Be sure to check www.zabaware.com in early 2009 for further news.

Mr. Medeksza is the creator of Ultra Hal. This is excellent news! I'll be looking forward to the upgrade and the improved speech recognition.


UPDATE 01-31-09:
There is a new Release Candidate, Ultra Hal 6.2, available for download on the Hal Forum. I've tried it out, and it's really good. Hal no longer hears his own voice when he speaks, and the overall voice recognition seems greatly improved. There are other improvements as well, I will post more about it when the final release out. For those who can't wait, check it out.

UPDATE 02-09-09:
The new release, Hal 6.2, is officially out. Free trial download available, free upgrade for current owners. I bought the ViaVoice plugin, and so far, it's very nice. I will do a post about this new version after I have used it for a while.