When I bought my police scanner a while back, I made sure it had the capability to scan Ham Frequencies too, so I could find out what kind of Ham radio community we have here on the south coast.

At first, it seemed like there was nothing going on; my random attempts to scan ham frequencies didn't turn up much. But then I read that ham communities often hang out at certain frequencies, usually around a designated "net" that meets up on specific dates.

I discovered on-line that there is an ARES net (Amateur Radio Emergency Service) that meets up on Tuesday evenings. They do a role call check in, make Ham Club announcements, invite visitors to introduce themselves, then turn the frequency over for general amateur use. Chit chat often follows, and I've found that if I scan frequencies in that band range, there is often conversations going on. It's a pretty active community locally, and they talk to people all over the state and in surrounding states like Washington, Nevada, and California too.

I found out about our local ARES net here:

When all Normal Means of Communications Fail!

There are LOTS of links and resources to explore on the site. It was there that I found my local ARES net, and began to learn about ARES and what they do. And I found out how, on a local level, just how important they can be. 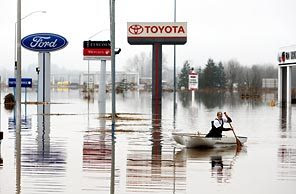 Amateur Radio to the Rescue in Oregon

[...] “I’m going to tell you who the heroes were from the very beginning of this…the ham radio operators. These people just came in and actually provided a tremendous communication link to us,” said Oregon Gov. Ted Kulongoski after a visit Tuesday to Vernonia and a fly-over there and other affected areas.

In Oregon’s northern coast, callers were again able to make and receive long-distance phone calls after floods and mudslides breached a major fiber-optic line in several places around Westport.

A network of at least 60 volunteer amateur radio operators working along the coast and inland helped from keep crucial systems such as 911 calls, American Red Cross and hospital services connected. The ARRL provided emergency communications, relaying information about patient care and lists of supplies needed in areas cut off by water.

“You are amateur in name only,” said Steve Sanders, a spokesman for District One of the Amateur Radio Emergency Service (ARES), which helped in several key counties hit by the storm.

The storm has now largly passed, but ARES is still providing communications to the coast, with more than 60 volunteers working at the coast and many more at points in between.

The District One Emergency Radio Network was activated at 8 AM Monday morning and is still in operation today; District One ARES serves Clackamas, Clatsop, Columbia, Multnomah, Tillamook and Washington counties - the northwest corner of the state.

According to ARRL Oregon Section Public Information Coordinator Steve Sanders, KE7JSS, “We are working closely with the American Red Cross as well as the major hospitals, Heartnet radio network and district-wide emergency managers, including Oregon Emergency Management in Salem.” [...]

Read the whole thing, it's quite impressive what they were able to do. ARES sounds like sounds like something useful I would like learn more about, and perhaps even join in and help. It's yet another thing to motivate me to get my Amateur license in the coming year.

You can find out more general information about ARES, what it is and what it does, from this description on the ARRL (American Radio Relay League) website:

http://www.ares.org/
This site has more info about ARES and other Emergency Amateur Radio groups as well.

Radio Amateur Civil Emergency Service
Another emergency service group, whose memebers often overlap with ARES. But RACES has a different history and a more specific purpose. Follow the link to find out more.

MILITARY AFFILIATE RADIO SYSTEM (M.A.R.S.)
Anyone interested in providing Amateur assistance to the US military should visit this site. I'll be looking into it.

I recently arrived from North Carolina to Salem, OR. (AFA4IO, formerly AFA2IO) The 2009 frequency matrix and region assignments don't seem to conform to what I am hearing on the bands. I'd like to joined AFMARS here, but I am having trouble making the right connections. I know the program is in flux. Any help would be appreciated.
Pete W7FMM (formerly WB4FMM)
clivepeterdeane@yahoo.com

Hi,
I think you are in ARES district 4. If they have a radio net you could visit, I would ask them about AFMARS, they might know something. Here is a link to ARES for Marion county:

The frequencies and times for the ARES net meetings are at the bottom of the page.

I had considered getting involved with some of the MARS programs eventually, but as you say, they are in a state of flux right now, and may not continue. Many don't have much of a presence online either.

I can't tell you much, as I'm still a newbie to all this. But I expect that your local ARES net is as friendly to visitors as ours is here. Many ARES members are involved in, or know about, some of the MARS organizations too, so they may be able to assist you.