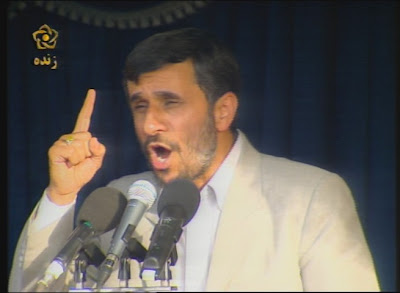 [...] Mahmoud Ahmadinejad: With the grace of God, we have almost reached the end of the path where we can take complete advantage of all nuclear capabilities. We are very near the summit. The resistance of the enemies grows weaker every day.

Now they are mustering all their power, in order to cause some commotion – some resolution, some pressure, some uproar... But let me tell you that with the help of God, they are done for. Like a battery about to run out, they muster the remainder of their power but Allah willing, nothing will happen. We've passed that. Wait one month, two months, three months... Allah willing, as soon as possible, we will pass that. Their situation is much worse than one can imagine. Their foundations are shaking. Nobody is with them. They though that if they used threats, people here would withdraw voluntarily. When they used threats nobody withdrew. When they used their fist – it boomeranged back at them. What's left for them to say? A few months ago, they threatened us militarily. Do you remember? They specified the date. They said: "On March 27, at 5 a.m., we will bomb these 20 sites." From this position of making military threats, they've got themselves to the point where they want to have talks with us, and they say: "It wasn't us making threats."

(bold emphaiis mine) Talks? Even Ahmadinejad believes we have nothing to say. I think it's because of the Democrats that we are now having "talks" with the Iranians. A waste of time for us, it buys time for Iran, and lends them the veneer of credibility. Small wonder that they want to invite Nancy Pelosi to Iran. I don't see that any good will come of it.

As for the analogy of a battery running out, perhaps Ahmadinejad is confusing us with his own country? Here is a bit of economic news from the Memri blog:

Randa Taqi al-Din, columnist for the London daily Al-Hayat, reviews the economic shocks being experienced by the Iranian economy. Iran, the second largest exporter of oil in OPEC, is in economic crisis, caused by the shortage of gasoline for cars, which Iran imports in large quantities. Iran is suffering from a soft economy, 11% unemployment, and rising inflation.

Iran’s economic shocks are the product of state control over the economy, stifling bureaucracy, and poor management. Iran’s foreign policy and the provocative statements of Iranian President Mahmoud Ahmadinejad have had their impact on the Iranian economy as well.

In order to revive Iran's oil sector, $100 billion is required, but no foreign investments are currently available because of the sanctions.

The Iranian leadership is blaming U.S. President Bush for its mismanagement of the economy.

Iran’s rush last year to provide economic aid to the Lebanese while failing to provide aid to a city that suffered an earthquake was widely criticized by local papers.

Ms. Taqi al-Din concluded that the Iran has only itself to blame for its economic woes, because it could be doing much better had it focused its energies on the internal front.

(bold emphasis mine) Someone's batteries are running out. They need 100 billion in investments, or new resources to draw on. Where can they find new resources? From their neighbors, the Iraqis:

U.S. officials have identified the "fronts" as a cell connected with the Iranian Revolutionary Guards.

(bold emphasis mine) The Iranian theocracy has a strong interest in seeing Iraq's government fail.

There are many family connections and religious ties between the Shia Muslims in both countries. If the Americans leave before Iraq's government stabilizes, Iran could precipitate a civil war, where the Shia would most likely win and dominate. Then the Shia in both countries would unite, and Iran's oil problems would be solved... and everyone else's would begin. And the Iranian Government would also have new revenue to fund their terrorism, and grow their war machine. Ahmadinejad has made no secret of what he intends to do with that:

Ahmadinejad: The Countdown To The Destruction Of Israel Has Begun; We Hope To Move Towards Jerusalem

If we isolate Iran, their internal problems will increase and the regime may collapse from within. But if we pull out of Iraq and abandon it to Iran, we will see troubles much worse than what we are facing now.