Is it time for regime change in Iran yet? 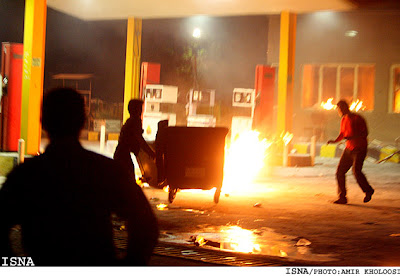 Some people seem ready for change. In reaction to the sudden rationing of gasoline with just 2 hours notice, riots have erupted, people are setting gas stations on fire and shouting "Death to Ahmadinejad". This is more than just a few isolated instances. Some reports say as many as 50 gas stations have been burned. Yikes! It's yet another crack in the fragile egg shell of Iran's theocracy. We need to keep the sanctions pressure on.

There’s rioting over gas rationing in Iran. Bloggers covering the turmoil here , here, and here. Iran is blaming–who else?–the U.S. for the unrest. 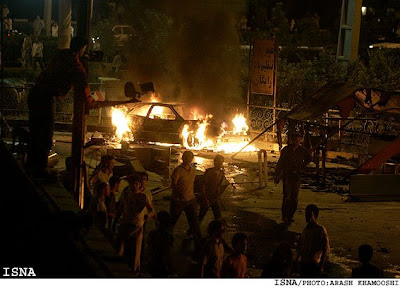 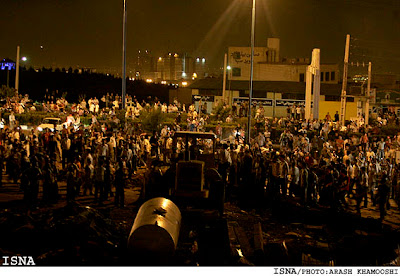 Visit the links for more photos and information. And not long before this, the fashion police were at it again, publicly torturing young men for wearing Western cloths and hair styles, by beating them and making them suck on cans used in toilets: 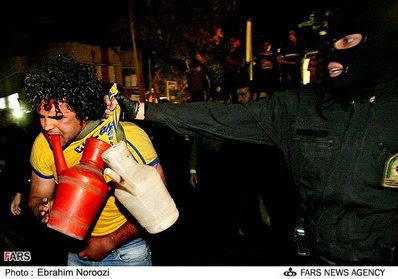 [...] Question: Will these photos be blared across the front pages of the international media with as much disgust and condemnation as the photos of Abu Ghraib or the manufactured Gitmo Koran-flushing riots?

Question: What do leftist apologists for the Iranian regime have to say about the brutal, appalling, and escalating crackdown on human rights? Yeah, you, Rosie.

Question: Will the same moral cowards who sat silently while Mohammad Khatami, former President of Iran, advocated executing gays during a Harvard lecture stand up now against this barbarism?

Answer: Of course not.

The latest wave of repression has been going on for months. No one, not even Khatami himself, has been spared scrutiny. Now, the New York Times [...] 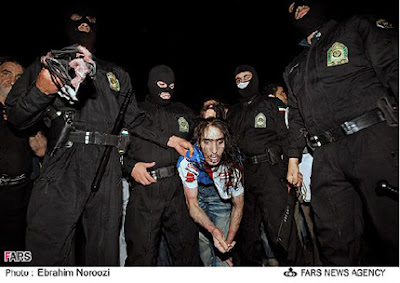 Visit the link for more disgusting photos of vicious brutality. The "policemen" in these photos, with the masks over their faces, are supposedly enforcing "morality". Do they wear masks over their heads because they are so proud of what they are doing? Or is it because they need to hide their identity in case the Iranian people want retribution against them later? 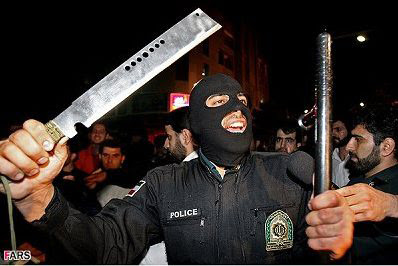 This is just the tip of the iceberg. Iran has a lot of problems with no end in sight:

The riots are just another symptom of a decay that has been festering for some time:

Iran, under the surface... is it crumbling?

With enough pressure from the outside, the present regime could collapse from within. Now is NOT the time to ease up on Iran, but rather to increase the pressure.