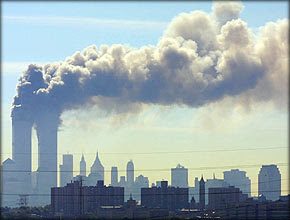 A couple of months ago I bought a police scanner. Since then I've been reading up a lot on police/Fire/EMS communications. It was while researching that topic that I came across this article, which dealt with a question I had always wondered about:

NEW YORK — Minutes after the south tower collapsed at the World Trade Center, police helicopters hovered near the remaining tower to check its condition. "About 15 floors down from the top, it looks like it's glowing red," the pilot of one helicopter, Aviation 14, radioed at 10:07 a.m. "It's inevitable."

Seconds later, another pilot reported: "I don't think this has too much longer to go. I would evacuate all people within the area of that second building."

Those clear warnings, captured on police radio tapes, were transmitted 21 minutes before the building fell, and officials say they were relayed to police officers, most of whom managed to escape. Yet most firefighters never heard those warnings or earlier orders to get out. Their radio system failed frequently that morning. Even if the radio network had been reliable, it was not linked to the police system. And the police and fire commanders guiding the rescue efforts did not talk to one another during the crisis.

Cut off from critical information, at least 121 firefighters, most in running distance of safety, died when the north tower fell, an analysis by The New York Times has found.

A six-month examination by The New York Times found that the rescuers' ability to save themselves and others was hobbled by technical difficulties, a history of tribal feuding and management lapses that have been part of the emergency-response culture in New York City and other regions for years. [...] 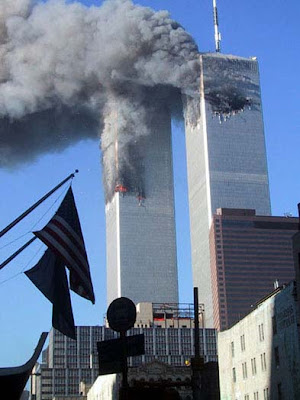 [...] Battalion Chief Joseph Pfeifer held his two-way radio to his ear. He tried to edge away from the noise in the north-tower lobby, hoping the reception would improve. Still no good. Minutes before, he stood on a street corner in Lower Manhattan and watched as American Airlines Flight 11 flew directly overhead and crashed into the north tower of the World Trade Center.

Now, as the first chief to reach the building, he was sending fire companies up the stairs, including one led by his own brother, Lt. Kevin Pfeifer, who did not survive. Then he found that he had no way to speak with the rescuers starting the long climb: Once again, the firefighters were having terrible radio problems inside this high-rise building.

Now, Pfeifer tried to turn on a device known as a repeater, which had been installed at 5 World Trade Center to help solve those problems by boosting the radio-signal strength. The repeater didn't seem to be working, Pfeifer said later.

Another fire chief arriving at the trade center tried a second repeater in his department car. That did not work, either.

By 9:30 a.m., after both planes had struck, a rumor was circulating that a third hijacked plane was headed to New York. Assistant Chief Joseph Callan recalled feeling the north tower move. "I made the decision that the building was no longer safe," the chief told the Fire Department's oral-history interviewers.

Virtually no one answered his call. It seemed that few people, apart from those standing near him, heard it. Chief Peter Hayden, who was at the scene, said: "We had ordered the firefighters down, but we weren't getting acknowledgments. We were very concerned about it."

By the department's own estimation, the radios they used, some 15 years old, were outdated.

In many instances, firefighters said they simply never got the order to leave because the radio system worked only intermittently. Firefighter Steve Modica said he tried different channels, without success, to reach a friend who had gone up ahead of him.

"It's a disgrace," he said. "The police are talking to each other. It's a no-brainer: Get us what they're using. We send people to the moon, and you mean to tell me a firefighter can't talk to a guy two floors above him?" [...]

The problems weren't all technical. It seems there were problems with the police and firefighters not to communicating with each other, for a variety of reasons.

The article ends with the story of an heroic rescue in process, right up to the end, when the 2nd tower collapses on both rescuers and evacuees. It seemed an abrupt way to end the article. But then, the story it was describing also ended abruptly. 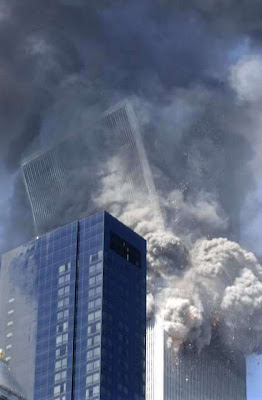 A closer look at the more technical aspects of the radio communications problems is offered on this page at Wikipedia:

Radio communications during the September 11 attacks

The page goes into detail about many things. But there seemed to be some questions about the repeater that was supposed to boost the fireman's radios. There was some confusion over whether or not it was working. The firemen in the lobby seemed to think it was not working, but the police and other services were using it, as well as some firemen, who hadn't been told it wasn't working. The control console in the lobby may have been malfunctioning, or wasn't being operated properly:

[...] The Port Authority repeater, intended to allow communications inside the towers, did not appear to work as intended on September 11. The system, also called Port Authority Channel 30, was installed after the 1993 World Trade Center attack. News accounts said the system had been turned off for unspecified technical reasons. The Commission report said it was customary to turn the system off because it somehow caused interference to radios in use at fire operations in other parts of the city. The documentary film gives different information, with a Fire Department member from Engine 7/Ladder 1 claiming that the aircraft's impact caused the system to fail. Evidence suggests the remote control console in the lobby command was not working but the repeater was. The radio repeater was located in 5 World Trade Center. A remote control console was connected to the repeater allowing staff at the North Tower lobby command post to communicate without using a hand-held radio.

A Motorola T-1300 series remote control is built in a telephone housing. The dial is replaced with a speaker and volume control. This remote control uses a two-wire circuit to control a base station.

In a review of the logging recorder track of the Port Authority repeater, someone arrived early during the incident and began to establish a command post. From the command post in the lobby of the North Tower (1 World Trade Center), the user can be heard trying to transmit using a remote control unit. After several failed attempts to communicate with a user on the channel, the user steps through every channel selection on the remote, trying each one. The recording contains the tone remote control console stepping through all of its eight function tones. Someone says, "...the wireline isn't working," over the Port Authority channel. Something that looks like a Motorola T-1380-series remote is shown in the documentary. The fact that users pressing buttons on the remote control can clearly be heard on the logging recorder shows the transmit audio path was working. The recording does not reveal whether or not the console function tones were keying the transmitter.[19]

Some users in the North Tower lobby interpreted the remote control unit not working as a failure of the entire channel. Other fire units, not knowing the channel had failed, arrived and began using it successfully. The recordings show at least some units were successfully using the repeater to communicate inside the North Tower until the moment it collapsed.[20] The Commission report says the lobby command may not have worked because the volume control was turned all the way down or because a button that must be pressed to enable it had not been pushed. [21]

On the audio track, an outside agency, possibly in New Jersey and using a repeater, comes through the receive audio on the Port Authority Repeater 7 system. An ambulance being dispatched by the outside (non-FDNY) agency is heard. This may be what the FDNY had described as interference caused when the repeater was left enabled at all times. The distant user appears to be repeated through the system, (possibly on the same CTCSS tone as was configured in Repeater 7). This appears to be a distant co-channel user on the same input frequency as Repeater 7. It's possible that by the random button pressing, a user sent a function tone that temporarily put the base station in monitor and that's what caused the outside agency's traffic to be heard. This is unlikely because subsequent transmit function tones should have toggled the receiver from monitor back to CTCSS-enabled. [22]

At any incident of this size, there is likely to be some overlapping radio traffic. In the same way that large incidents exhaust all the firefighting vehicles and staff, the radio channel resources may become taxed to their limits. NIST says about one third of the fire department radio transmissions were not complete or not understandable. [32]

Some radio users had selected the wrong channels. For example, on the Repeater 7 channel, a unit was heard to call Manhattan dispatch and Citywide. Although the circumstances that lead to the user selecting the wrong channel are not known, this can occur when the user is trapped in darkness or smoke and cannot see the radio. Users will typically try to count steps in a rotary switch channel selector starting from one end of the switch's travel.

A communications van operated by FDNY responded to the incident. Its radio identifier was, "Field Comm." A back up van was in use on the day of the incident because the primary van was out-of-service. The back up van was destroyed and audio recordings of tactical channels used at the incident site were lost. [...]

(bold emphasis mine) It's awful to think that the repeater wasn't utilized properly because of a possible misunderstanding of the controls of the lobby equipment. But none of that can be verified, as all of the equipment was destroyed when the buildings collapsed, as well as the radio communications van that the fire department used. 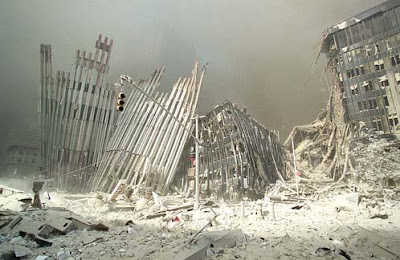 Hopefully we can learn to improve the communication systems involved, both the human and technical aspects, so we can keep more of our heroes alive. 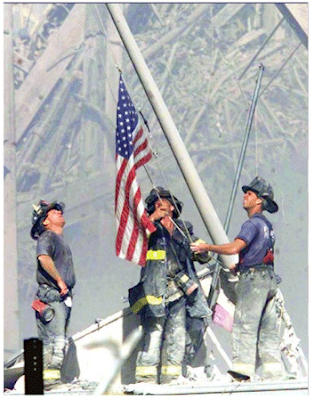 Pat has some really good poetry tributes on his blog today. Below are some of my previous 9-11 posts.