Lubna al-Hussein is determined to fight for her rights in Sudan: 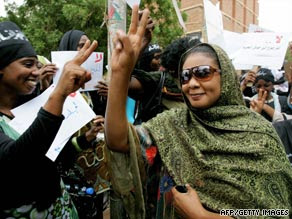 (CNN) -- A woman put on trial for wearing clothing deemed indecent by Sudanese authorities was fined Monday, but will not get the 40 lashes she could potentially have faced, her lawyer said.

Lubna al-Hussein, who is fighting to have the conservative Muslim country's decency law declared unconstitutional, will go to jail rather than pay the fine, her lawyer Nabil Adib told CNN.

Al-Hussein, who was arrested in July for wearing pants deemed too tight and a blouse considered too sheer, will appeal to the constitutional court, Adib said by phone from Khartoum.

She pleaded not guilty, but was not allowed to call defense witnesses or present a defense case, he added.

She was sentenced to pay 500 Sudanese pounds ($209) or face a month in prison, starting immediately, the lawyer said.

She refuses to allow anyone to pay the fine for her, Adib said.

Al-Hussein, a journalist who worked in the media department of the United Nations mission in Sudan, resigned from her U.N. position in order to waive her immunity as an international worker and face trial.

The human rights organization Amnesty International had called earlier for the charges to be dropped.

"The manner in which this law has been used against women is unacceptable, and the penalty called for by the law -- up to 40 lashes -- abhorrent," Tawanda Hondora, deputy director of Amnesty International's Africa program, said in a statement.

Al-Hussein was arrested along with 18 other women on July 3 at a Khartoum restaurant when police burst in and checked women for their clothing.

"I don't think she was targeted specifically," Adib said. "They attack public and private parties and groups. They are called 'morality police' and she was just a victim of a round-up." [...]

See the video that goes with the article. The outfit she was wearing looks to be similar, if not the same, as the one seen in this photo. Some of the women who were arrested with her WERE flogged. Barbaric.

No wonder Lubna al-Hussein wants to challenge it. She wants a public trial, and she wants the world to see it. The Sudanese authorities tried to give her an easy out, to avoid publicity, but she wants her day in court or the charges dropped. Good for her.