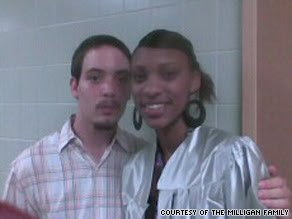 Armed with a chunk of concrete, several assailants beat Brian Milligan Jr. on the back of the head on August 18, leaving a 3-inch gash. They kicked him in the face, breaking his jaw.

Bloodied and bruised, the 18-year-old managed to walk five blocks to his grandmother's house before being rushed to the hospital.

Milligan's father believes several African-Americans beat his son, who is white, because he is dating an African-American woman. He wants police to treat the beating as a hate crime. He also has criticized what he calls a deafening silence from the community, police and the national media.

"If this was a black guy who was beaten by a group of white guys for dating a white girl, people would be up in arms," he said. "There's a double standard."

Buffalo police believe a group of about 10 to 15 African-American men attacked Milligan late at night, police spokesman Mike DeGeorge said. Police have made no arrests and are still investigating the motive, he said.

Milligan Sr. says he believes the attackers are the same "neighborhood guys" who threatened his son and his African-American girlfriend because of their interracial relationship. [...]

Follow the link and look at the pictures. Mulligan is seriously injured. Read the rest of the article. Mulligan's girlfriend has also been harassed and threatened for dating a white man.

[...] The story has touched a nerve with several members of Buffalo's African-American community, including a local pastor who leads a predominantly black church in Buffalo.

"At first, it didn't affect me the way that it would have if I heard it was a black teen attacked," said the Rev. Darius Pridgen, who spent years fighting for civil rights for African-Americans.

"But after I saw his father on TV pleading with the community to find the assailants, I decided I had to go after the people who beat this kid."

Pridgen said he felt that the community has turned a collective blind eye to the beating. So he gave a fire-and-brimstone sermon at the True Baptist Church on a Sunday after the attack, appealing to his congregation to help find the culprits.

"He didn't deserve to be beaten this way," Pridgen recalled saying at the service. "If you believe this, put your hands together."

If it was a black teen, Pridgen said, "We would have been protesting with flags and everything else."

Rod Watson also addressed the issue in his column in the Buffalo News. Watson, who is black, pointed out that interracial marriages are nearly 10 times higher than they were in 1960, according to U.S. Census data, but still those couples have a tough time being accepted by society.

"If blacks in Buffalo in 2009 are acting like whites in Selma in 1959, this society has big problems, despite electing a president who is himself the product of an interracial union," Watson said.

Judy Milligan, a community activist and Brian Milligan Jr.'s great-aunt, said she has been overwhelmed with support from her friends, both black and white.

Mary Woods, a member of Buffalo's African-American community, reached out to Milligan to offer her support.

"I don't care what color you are, when something like this happens, justice must be served," Woods said. "There had to be someone who saw something, and they should come forward." [...]

I don't like the idea of "hate" crimes, because when does an attack like this NOT involve hate? Hate is hate, no matter the color of the person it's directed at. Most people understand that at a common sense level.

Buffalo is an arm-pit. No surprise