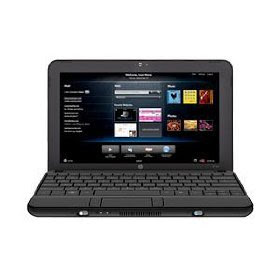 As of this date, it's selling on Amazon for $404.00. No reviews on Amazon yet. But Distrowatch.com has a detailed review of an almost identical model (slightly different specs) by Ladislav Bodnar: 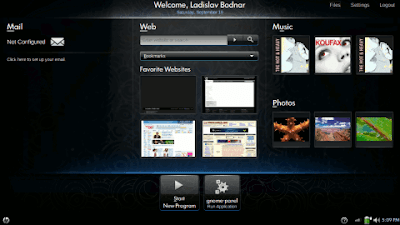 The most interesting part of the netbook is, of course, its software. The HP Mi (Mobile Internet) interface is a customised and simplified built of Ubuntu 8.04 LTS ("Hardy Heron"), which was released in April 2008. As such, the software packages aren't particularly up-to-date, with Linux kernel 2.6.24, GNOME 2.24.3, Firefox 3.0.13 and OpenOffice.org 2.4.1 all somewhat older than the current latest versions of these applications. But unlike Windows netbooks, which all come with the same standard (i.e. uncustomisable) desktop interface, HP Mi's default desktop is a different story. It is divided into three columns - the left one shows your emails (once email settings are configured in Thunderbird), the middle column has thumbnails of web pages (similar to Opera's "Speed Dial") and the right column is separated into two parts, with the top one listing any recently played music files, while the bottom one showing recently viewed photos. [...]

The full review is quite thorough, and includes several screen shots. Ladislav has a few minor complaints, but ultimately gives it a rating of 8 out of 10 stars.

This unit looks very attractive to me, but I've seen cheaper netbooks with XP, that could be converted to Linux. Mind you, not a whole lot cheaper, so the price difference might not matter much in the end.

As tempting as it is, I have to admit I have no pressing NEED for a netbook. So I think I will just wait a bit for some more reviews, to see what happens with other people who buy if first. And perhaps an even better edition will come out in the meantime. But I would love to hear from anyone who bought this, if you would care to leave some comments here.

Interesting comments Dogflap, thanks for sharing them. If you change the user interface, I'd be interested to hear how that works out for you.

Like Ladislav I found the Mi interface limited. I did find that you could a terminal icon to the Settings -> Advanced menu. Unlike Ladislav I have not, as of yet, been able to get wireless to work under the Ubuntu Karmic Koala beta. I will be trying other distros as well as posting to the Ubuntu forum to try and get it straightened out.

I am not as enamored of the keyboard as some people are. I don't mind a small keyboard. This netbook actually has larger keys than my full size Toshiba laptop but the keys aren't beveled: they are completely flat. I find I make more typing errors with this keyboard than I did with the smaller Sylvania netbook this one replaced.

I'm probably in the minority here but I really like the smaller footprint of older netbooks. I still have a Toshiba Libretto (circa 1998) with a 7" screen and an itty bitty keyboard which I got quite used to. Small size and low weight was one of the big attractions to me of netbooks and making them bigger is not a good thing in my book.

Overall, even with my nitpicking, I like the netbook so far. The screen is bright and sharp and the system is quite fast. Now if I can get a distro I actually like to work properly on it...

Thank you for sharing that Caitlyn. It's very helpful to hear comments from people who actually have bought it and are using it.

If you find another disto that you prefer for this machine, I hope you will come back and tell us about it.

Hi Chas,
I bought mine this summer had about 3 weeks to play with it before Fall term started. It cost about 500 as configured: 6 hr batt, 2Gig, wireless kbd & mouse. I loved the unit out of the box. youtube worked! audio was fine. HP thinks that you won't need any other apps, and don't make it easy to fix, but the tools are on board (not visable) to get what you want. Caitlyn is right about the terminal being hidden for rookie protection, and the keys should be beveled for certain. Display is as she says Great.
I chose the HP because I wanted the form factor of a netbook, needed a usable keyboard - don't really like the flat but wouldn't pay $150 more for a good feel - wouldn't buy an off brand like e-machine wanted the SDD and Factory tested configurtation & support.

Things were great until my realistic mode kicked in. I knew that I'd eventually futz around with it enough to need a re-install, so I tried the on-board "rescue" provided. It flat-out didn't work at all!!
In short, if anyone has a factory install and could create an image from a 110-1000 I'd be greatfull and might even pay for it! HP denies that it came as MI even when the barcode label says so!
Any way - for the recovery you need to choose the media - and since it's a SDD I really don't have any issue choosing - like , the only offered choice. I forget exact screen quote, but basically "that is an invalid choice". 9 (really) go-rounds with HP service and I finaly get an image to use (identical to one posted by an HP tech in a previous forum that I already used and broke the netbok). That image is for the mini-1000 not the mini-110, and there are some differences that result in a lock-up at boot - I'm begining to question the support part, hopefully if repair or replacement is needed they'll play nice.

Works great, However sound and network are issues, (HP special drivers) Wireless works fine so I had to get a wireless router for home. There's success stories in the forums for these, but I didn't have time to get them working prior to school, so I'll be working on them now, before winter term starts in Jan.

The size is great for classroom work, the screen Zoom functions are great, the extra wireless keyboard and mouse work great for this and my deskbox.

Thanks Scott, for the detailed report. Lots of things there to consider.

G'day, Ive had my mini 1081UT for almost a week now, was looking for something to couch surf and hadn't even thought about a HP but JB hifi offered this one to me at $350 which I thought was OK so I got it. Its just a toy to me so I had no real expectations except that I wanted to install windows of any flavor, probly XP. As it turned out the shop stock i got had a user account with a passport so a reinstall was necessary anyway. After a couple of late nights I found Unetbootin and Ubuntu netbook remix and love it, mostly. So its a useful toy now. Unetbootin is the easiest way to put many distros on your netbook without a CD. Just point it at the ISO and it turned my usb stick into a live cd, then F9 and away you go, awesome. I tried gOS, nice but no networking wired or wireless, Ubuntu 9.10, no wireless, then this 9.10 netbook remix and I still had to connect it to a wired connection to activate the proprietary driver for wireless. I still might have a go at windows at some point but not until I get an external CD. My biggest disappointment so far though is Google earth which needs a min res of 1024x768 but Google might sort that and release a netbook version, I can only hope.

Thanks for sharing that, Baphed. You've provided some good information there.

I bought the Aussie version Mini 110 1081TU. I found the software stale Ubuntu 8.04 customised). I found HP totally abandoned the product already so forget about updating from _their_ repositories or even getting another image from them for reinstalling.

I installed Ubuntu 10.04 from a usb key.
Everything works & the machine boots blisteringly fast from its 16Gb SSD.

Even has a multi format memory card slot built in whuch works :)

I pulled out the very weak 3 cell battery the other day out of curiosity & surprised to find a sim card slot in there.. hmmm.. wonder if their is a 3g modem hiding in there??

Fragile though. Dropped from a sofa & screen is cracked in dozens of pieces.. replacement cost $250 inc labour from a local repairer. Not economical to repair. A pity to have to throw the little netbook away.

Thanks for sharing your story. That's a shame about the screen. Is there any way to plug an external monitor into it? If so, it might still be serviceable as an mini-desktop.

Got everything working super for the last several months. UNR 9.10 Then last week I needed more space for an update. No problemo! just shrink that data partition a bit, and then enlarge the main partition from a UNR-live session, & go.
Now I've resized partitions boatloads of times, carefully removing any critical data for safety & never had a glitch with the resize.- You can guess, this time I didn't do that and YUP, broke my machine. all data including the backup files were on the data drive. Thankfully it was Finals week and all projects using that data were complete and on the thumb-drive.
Now I'm trying to relocate just what simple actions were needed to get things working correctly - the how-to probably got moved to that data partition at some point as I can't find it on what's left, or on my desk machine. Anon says UNR-10.04 works well perhaps I'll give it a try though I've heard some serious criticisms of it.

OH, it works great with the big-screen TV as a monitor with the wireless kbd and mouse from the easy chair!

Thanks for sharing that. If you try it, I'd be interested to hear how installing UNR-10.04 works out for you.

Here I am, 11 months later, and I am completely satisfied with my HP Mini 110. Here is an updated mini-review I've written: http://ever-increasing-entropy.blogspot.com/2010/09/hp-mini-110-netbook-almost-one-year.html

It's a pity HP is no longer offering netbooks preloaded with Linux in their consumer product line. If they did I would recommend their products. I've found the HP Mini 110 to be rugged, reliable and a pleasure to use.

Caitlyn,
That's a great review you did, thanks for posting the link to it here. Even though the Mini 110 is no longer being produced, it's replacement, the mini 210, is so similar that I'm sure much of what you said in your review is likely to apply to it, too.