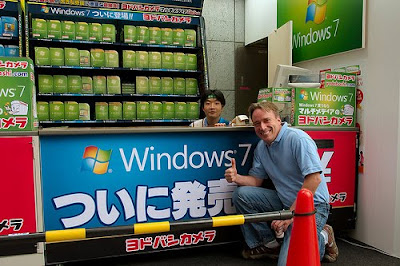 Or does the Linux creator just have a good sense of humor?

Does Father of Linux Favor Windows 7?

[...] The photo, posted by Chris to Picasa, offered this narrative: "Since Microsoft tried to torpedo the success of the Japan Linux Symposium by launching their Windows 7 product that same day right across the street, we decided to make some fun of Microsoft. We dragged Linus to their big promotion booth. One of the sales guys took only a minute to get Linus sold on it as you can see in the picture. At least that's what he thought. He obviously had no clue who he was talking to. But in the end Linus did not buy a copy..."

Linus seems genuinely happy about something in the picture ... what does he know that Microsoft doesn't know?

There is more about the photo here:

[...] However, what I do think is significant here is that Linus has a sense of humor, and has no interest in being caught up in the Free Software nonsense where one of the major sticking points in their ideology is a hatred of “Unethical” software companies in which Microsoft is the poster child — and in utter contempt and protest the products they release, which includes a recently started campaign against the “Sins” of Windows 7.

Do I actually believe Linus was endorsing Windows 7? No, he was in town for the Japan Linux Symposium. But it shows he has a clear sense of humor, understands tolerance, and knows how to lighten up when his Free Software counterparts are frothing at the mouth during one of the most important software launch days in Microsoft’s history.

So is Linus Torvalds the latest entry on the Free Software Foundation’s and Richard Stallman’s “Traitors” list for daring to appear in front of a pile of Windows 7 boxes without lighting them on fire first? [...]

One of the things I've always liked about Torvalds is his tolerance and sense of humor.


More about Linux and Windows 7:

Will Windows 7 Change Our Minds About Microsoft?

[...] The question is, after more than 30 years of bluster, hype, deception, cluelessness, and an inexplicable lack of humility, has Microsoft really changed? Or has it just hired better marketing consultants? [...]

What Windows7 could mean for Linux

[...] So the bottom line for Linux on Windows may be simple: Windows7 is probably Microsoft’s best OS yet and will therefore slow the move the Linux in the short term, but the limitations built into Microsoft’s development stack show it to be a dead end that will leave Microsoft marketing magnificent visions of its unfolding future while quietly figuring out how and when to abandon that code base for something else - and because that something could very logically be Linux it might be time for the Linux community to start paying a lot more attention to legacy interoperability with Windows.

[...] As you should be able to tell from the scope of the features we've discussed, Windows 7 marks a significant point of maturity in the development of Windows, and is what the much-maligned Vista should have been three years ago. There's still a distinct lack of innovation, but the improvements to system stability and performance are what's going to matter to most users. And most users of Windows are businesses. They're not interested in eye candy, Twitter integration and hardware acceleration. They just need Windows to be a sober working environment that doesn't get in the way of helping people work.

And this is where Linux can make a big difference. There's nothing in Windows 7 that Linux can't do, and in most cases, do it better. Our machines are quicker and more efficient. Our desktops are more innovative and less static. Our apps are more powerful, cheaper and less partisan, and Linux security has never been better. But best of all, we have complete control over the future of Linux, and it's success or failure at the hands of Windows 7 is in our hands.