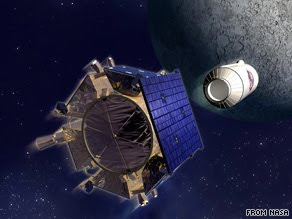 An artist's rendering shows the LCROSS spacecraft, left, separating from its Centaur rocket.

NASA set to crash on the moon -- twice

(CNN) -- Two U.S. spacecraft are set to crash on the moon Friday. On purpose. And we're all invited to watch.

NASA's Lunar Crater Observation and Sensing Satellite is scheduled to drop its Centaur upper-stage rocket on the lunar surface at 7:31 a.m. ET.

NASA hopes the impact will kick up enough dust to help the LCROSS probe find the presence of water in the moon's soil. Four minutes later, the LCROSS will follow through the debris plume, collecting and relaying data back to Earth before crashing into the Cabeus crater near the moon's south pole.

The LCROSS is carrying spectrometers, near-infrared cameras, a visible camera and a visible radiometer. These instruments will help NASA scientists analyze the plume of dust -- more than 250 metric tons' worth -- for water vapor. [...]

The dust plumes will be visible with midsize or larger backyard telescopes. Read the whole thing for more details.

I expect the results of this mission's findings will have a major impact on whether or not NASA will continue to plan for a manned mission to the moon. If the moon can be proved to contain water (ice crystals) then a return to the moon, to set up a permanent base, would be more viable, if we didn't have to bring all the water necessary to establish a moon base. Lunar ice would save us money, a factor that NASA is having to consider more and more, as some politicians clamor for it's budget to be cut and used for "social" programs instead.

Is a Big Shake Up going to happen at NASA?

NASA's Mission to the Moon may be Scrapped