Our economy: when will inflation begin? 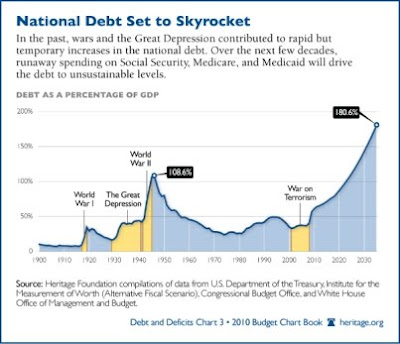 Perhaps as soon as next year? 5.5 percent inflation, or higher:

Angry Voters Are Right: Growing Debt Can Slow the Economy

[...] Anyone who ponders the question of why voters are so hot about public sector debt will quickly discover that otherwise diverse voters are relatively united in their apprehension that ballooning sovereign debt threatens our economy.

Are voters right to be so worried about how rising debt threatens their economic future, or are some politicians and most pundits right that, once again, the voters’ emotions have won over their reason?

Well, it turns out that the voters are right, if new research from Carmen Reinhart of the University of Maryland and Kenneth Rogoff of Harvard University stands up under academic scrutiny. Reinhart and Rogoff study the relationship between rising debt levels, inflation and economic growth rates for 44 developed and developing countries. Their dataset contains 3,700 annual observations across a wide range of political and economic settings.

What did they find? For the period 1946 through 2009, developed countries (which includes the United States) grew at an annual rate of just shy of 4 percent when debt was no greater than 30 percent of GDP. For debt burdens above 30 but below 90 percent, economic growth slowed down but remained, on average, around 3 to 3.5 percent per year. However, a debt burden of over 90 percent of GDP was associated with a significantly slower economy: the average growth rate is negative and the median rate is just at 2 percent.

When Reinhart and Rogoff focused just on the U.S., the association of high debt burden and economic slowdown becomes even more pronounced. They use data from 1790 through 2009. When debt rises to 90 percent of GDP, both the average and the median economic growth rates are negative and the inflation rate skyrockets to above 5.5 percent.

What makes this research so telling is the commonly accepted prediction that U.S. sovereign debt is on its way to 100 percent of GDP and doing so quickly. The International Monetary Fund predicted that total U.S. government debt would reach that level in 2015, just four years from now. The Congressional Budget Office forecasts that debt will be above 90 percent by 2020. If one adds in the debt U.S. government agencies owe one another, the U.S. debt could be above 100 percent next year. [...]

That may go a long way in explaining some of the grim financial forecasts for next year. Is it true? We shall see soon enough.

Fancy the content I have seen so far and I am your regular reader of your blog.

I am pleased to see my blog in your blog list.

Hope to see a positive reply.

Thanks for visiting my blog as well !

Waiting for your reply friend !!!!!