It isn't sci-fi, it's an actual product: 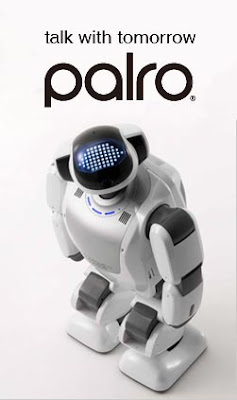 In what comes as a bit of a surprise, Fuji Soft Inc.’s new humanoid robot platform for hobbyists and researchers has been given the name PALRO (pal + robot). Naturally we feel this name is a superb choice! Sales to research institutions will begin on March 15th, 2010 with a general release following later in the year. The robot combines Fuji Soft’s software prowess with an open architecture which will give developers plenty of room to experiment.

PALRO stands 39.8cm (15″) tall and weighs 1.9kg (3.5 lbs), and here’s the good news: it costs 298,000 JPY ($3300 USD). Considering PALRO has 20 DOF, a camera, 4 directional microphones, a speaker, LED arrays in its head and chest, 4 pressure sensors in each foot, 3-axis gyro sensor, an accelerometer, and an Intel Atom 1.6GHz CPU, it is priced very competitively. A comparative robot kit like Vstone’s Robovie-PC for example, costs $1100 USD more and doesn’t have such a fancy exoskeleton.

During the press conference, PALRO responded to verbal commands through speech recognition (“step back” and “introduce yourself”), and demonstrated its face recognition software by visually identifying three people at once. It then took a picture using its camera (the LEDs in its head lit up in the form of a camera icon) and wirelessly emailed the photo to a PC. To demonstrate its online news reading functionality, PALRO first asked which section of the news it should read before reading from that topic, gesturing as if it was flipping through a newspaper.

It was then commanded to download an application – a dance app from the community! Users will be able to choreograph original motion routines (and from the looks of things, LED animations) and share them online. PALRO units can also transfer applications and files to one another wirelessly. To top things off, three PALROs did their best sumo impressions! [...]

Follow the link, for some Youtube videos of Palro in action. He does quite a lot, seems rather impressive to me. What will the Japanese think of next?

The webpage for Palro, on the manufacturers site, is here:

Be sure and check out the left sidebar links at the site, labled "features" and "Functions and Specifications".