Russian Cruelty to a Donkey 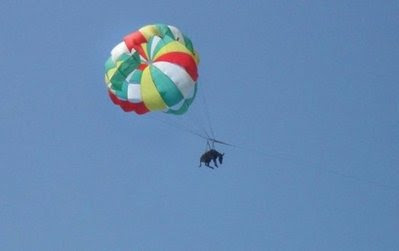 MOSCOW – Authorities in Russia are opening an animal cruelty probe into a weekend stunt on a beach in southern Russia in which a donkey parasailed high over the surf. Amateur video footage showed men attaching a parasail harness to the trembling mule. The English-language Kremlin news channel Russia Today reported that sunbathers were distressed at the sight of the flying donkey, which brayed in fear as it glided above the bay for half an hour.

Russia Today reported the donkey was shell-shocked but survived.

Reports said the donkey flight was a promotional stunt. Employees of a leisure firm in the village of Golubitskaya on the Azov Sea could face two years in prison if they are charged and convicted of animal cruelty.

Funny that the "advertisers" didn't realize that the sunbathers might think a distressed donkey was not funny. I guess some Russian Capitalists are clueless.