Our cover image this week is powerful, shocking and disturbing. It is a portrait of Aisha, a shy 18-year-old Afghan woman who was sentenced by a Taliban commander to have her nose and ears cut off for fleeing her abusive in-laws. Aisha posed for the picture and says she wants the world to see the effect a Taliban resurgence would have on the women of Afghanistan, many of whom have flourished in the past few years. Her picture is accompanied by a powerful story by our own Aryn Baker on how Afghan women have embraced the freedoms that have come from the defeat of the Taliban - and how they fear a Taliban revival. (See pictures of Afghan women and the return of the Taliban.)

I thought long and hard about whether to put this image on the cover of TIME. First, I wanted to make sure of Aisha's safety and that she understood what it would mean to be on the cover. She knows that she will become a symbol of the price Afghan women have had to pay for the repressive ideology of the Taliban.

But bad things do happen to people, and it is part of our job to confront and explain them. In the end, I felt that the image is a window into the reality of what is happening - and what can happen - in a war that affects and involves all of us. I would rather confront readers with the Taliban's treatment of women than ignore it. I would rather people know that reality as they make up their minds about what the U.S. and its allies should do in Afghanistan. (See the cover story "Afghan Women and the Return of the Taliban.")

The much publicized release of classified documents by WikiLeaks has already ratcheted up the debate about the war. Our story and the haunting cover image by the distinguished South African photographer Jodi Bieber are meant to contribute to that debate. We do not run this story or show this image either in support of the U.S. war effort or in opposition to it. We do it to illuminate what is actually happening on the ground. As lawmakers and citizens begin to sort through the information about the war and make up their minds, our job is to provide context and perspective on one of the most difficult foreign policy issues of our time. What you see in these pictures and our story is something that you cannot find in those 91,000 documents: a combination of emotional truth and insight into the way life is lived in that difficult land and the consequences of the important decisions that lie ahead. [...] 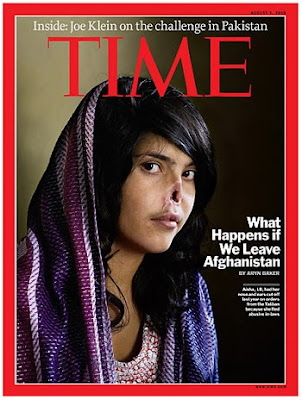 At 16, her father promised her hand in marriage and she was handed over to a large family, who she claims were all members of the Taliban in Oruzgan province. "I spent two years with them and became a prisoner," she says. Tortured and abused, she couldn't take it any longer and decided to run away. Two female neighbors promising to help took her to Kandahar province. But this was just another act of deception. When they arrived to Kandahar her female companions tried to sell Aisha to another man. All three women were stopped by the police and imprisoned. Aisha was locked up because she was a runaway. And although running away is not a crime, in places throughout Afghanistan it is treated as one if you are a woman. A three-year sentence was reduced to five months when President Hamid Karzai pardoned Aisha. But eventually her father-in-law found her and took her back home. That was the first time she met her husband. He came home from Pakistan to take her to Taliban court for dishonoring his family and bringing them shame. The court ruled that her nose and ears must be cut off. An act carried out by her husband in the mountains of Oruzgan where they left her to die. But she survived. And with the help of an American Provincial Reconstruction Team in Oruzgan and the organization Women for Afghan Women (WAW), she is finally getting help. The United Nations estimates that nearly 90 percent of Afghanistan's women suffer from some sort of domestic abuse. "Bibi Aisha is only one example of thousands of girls and women in Afghanistan and throughout the world who are treated this way. Aisha is reminded of that enslavement every time she looks in the mirror. But there still times she can laugh. And at that moment you see her teenage spirit escaping a body that has seen a lifetime of injustice. [...]

Such monstrous, unnecessary cruelty. She is being brought to the US for reconstructive surgery. And, I hope, to make her story more widely known.

I'm not a big fan of TIME magazine, but their decision to feature Aisha's story on the front cover, does literally put a human face on what is happening there. And yet, what is the best way to do something about it? That will be the debate.

Thank you for taking the time to share Aisha's story. If you are interested in hearing about what influenced TIME editors to feature her image on the cover, editor Rick Stengel and columnist Joe Klein will be discussing the cover with Charlie Rose tonight on Bloomberg Television at 8P/10P ET. There is a short clip of tonight's episode posted on Facebook if you want to see a preview: http://www.Facebook.com/BloombergTelevision

I feel pity on those who faced such a situation, where proper systems and government is not available, but see in today's 5th aug 2013 news paper Hindustan times a brother was killed trying to save his two sisters being raped, did not mention what happened to the two girls. there are daily several such incidents in India. what to mention more......