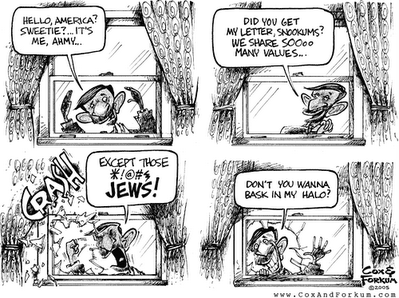 Parts of Ahmadinejad's letter to America sound like our Democrats talking points. He also uses a lot of flowery language about peace, etc. He says we share the same values. But how true is that?

It's interesting to look at what President Ahmadinejad says on Iran's state-controled national TV. The website MEMRI.ORG has thousands of on line video clips from Middle Eastern TV, from various countries, on multiple subjects. The clips come with transcripts in English. I'll start with the most recent ones from Iran.

Here is a sample of what Ahmadinejad says about America to the Iranian people: 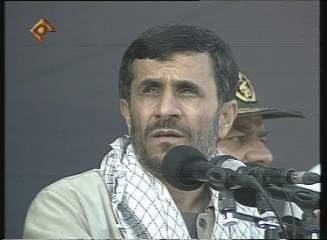 No suprise there. He has said this before, and makes no secret of it. 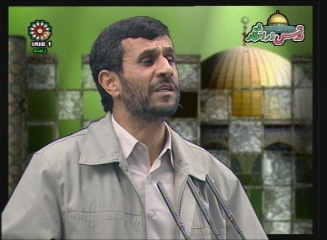 #1301 - Iranian President Mahmoud Ahmadinejad: The Western Countries Should Pick Up the Zionist Regime by the Arms and Legs and Remove It from the Region; U.N. Resolutions Are Illegitimate; America and England Are the Enemies of the Iranian Nation
IRIB/Jaam-E-Jam1 (Iran) - 10/20/'2006 - 00:10:41

That doesn't sound too warm and fuzzy. 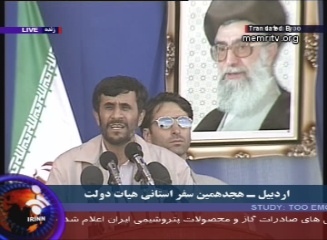 #1241 - Iranian President Mahmoud Ahmadinejad: The U.S and England Are Not Worthy of Security Council Membership. Those Who Want Good Relations with the Iranian People Should Bow and Surrender to its Right and Might
IRINN (Iran) - 8/13/2006 - 00:03:21

"Bow and Surrender to it's Right and Might"? I guess when he talks about "peace", it means that we surrender. And don't forget, Islam means "peace". 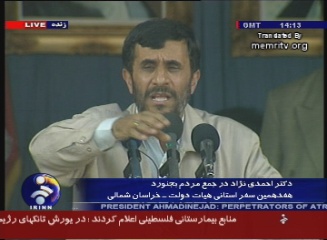 Of course, they only want nuclear technology for PEACEFUL purposes. Sounds like it, doesn't it? 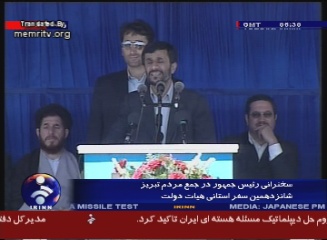 You mean it hasn't exploded yet? I guess the best is yet to come...


This is just a sample, there's more. If you go to www.memritv.org, you can click on "search" and enter the # for any of these clips to view them. There are links with each clip for transcripts of the content in English.

[...] Here's an "or else" scenario from Nawaf Obaid, an adviser to the Saudi government, that actually sounds promising -- not a term that usually springs to my mind to describe Saudi scenarios. Contemplating what he would call an unwelcome American withdrawal from Iraq, Mr. Obaid writes that the Saudi government just might fill the breach out of "religious responsibility" to Iraq's Sunni minority. Saudi Arabia, "the de facto leader of the world's Sunni community," Mr. Obaid writes, just might decide to support Iraq's Sunni fighters, just as Iran has been supporting Iraq's Shi'ite fighters, to avert a possible "full-blown ethnic cleansing."

Imagine: Sunni Saudi Arabia vs. Shi'ite Iran -- and nary an American soldier ordered to pull his PC punches in the crossfire. But there's more. Mr. Obaid continues: King Abdullah might also "decide to strangle Iranian funding of the [Shi'ite] militias through oil policy. If Saudi Arabia boosted production and cut the price of oil in half, the kingdom could still finance its current spending. But it would be devastating to Iran, which is facing economic difficulties ...The result would be to limit Tehran's ability to continue funneling hundreds of millions each year to Shi'ite militias is Iraq and elsewhere."

I like. If Saudi Arabia "strangled" Iran's economy, that would also strangle Iran's capacity to fund its nuclear blackmail program, not to mention Hezbollah and other murderous proxies. And what was that the Saudi adviser said about cutting the price of crude oil in half? [...]

(bold emphasis mine) It's an interesting Idea. But not everyone agrees that it's that simple:

[...] I'd be quite surprised if, in the absence of a U.S. presence in Iraq, the Saudis would be able to counter-balance Iran there. It strikes me as more likely that al Qaeda, if anyone, would serve that function (not that the Saudis and al Qaeda necessarily represent an "either-or"). I'd also be surprised if, without substantial assistance from the U.S., the Saudis or anyone else would be able to check Iranian power in the region as a whole. [...]

I know that militarily, the Saudi's have depended on the U.S. to look after their interests. Without that support, how much could they help the Iraq Sunnis? If the Saudis cut oil prices, would it really affect Iran that badly? I can only wonder if they would put it to the test.

Excellent research. Thanks for this post. I'm stashing the permalink for later (if I get busy myself! lol)

Thanks Chrys. There is so much stuff to look through at MemriTV.org, you could easily spend HOURS looking through it all.

These were all clips of Ahmadinejad talking. Tomorrow, I'm going to post about some of the other offerings on Iranian TV.