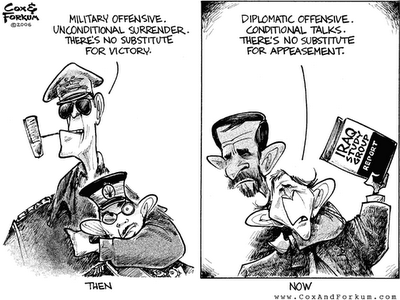 Hat tip to Cox and Forkum for the cartoon. You can read their related commentary and links HERE. An excerpt:

[...] Bush would like us to believe that we nonetheless have Iran on the defensive and that the West has set the terms. But in reality it is Iran that is setting the terms. The Islamic Republic is an openly hostile enemy who is not only pursuing nuclear weapons in violation of numerous agreements but is also actively involved in killing our troops in Iraq -- and yet they have suffered no negative consequences. It is an act of appeasement to even consider talks with Iran because it rewards their past behavior. Iran has set the terms by pursuing whatever policies are in their interest while the West merely reacts with words. Why would Iran suddenly begin to punish themselves for our sake, just because we asked, when their current strategy is working just fine?

Until the Iranian regime is defeated militarily, there can be no meaningful talks. Bush may admit that the situation in Iraq is "bad," but until he admits that Iran is the real source of the problem, the situation will only get worse. [...]

(bold emphasis mine) There is only one way to appease the Iranian government. They keep saying "Death to America" for a reason.

[...] Iranian President Mahmoud Ahmadinejad has warned Western leaders to follow the path of God or "vanish from the face of the earth".

"These oppressive countries are angry with us ... a nation that on the other side of the globe has risen up and proved the shallowness of their power," Ahmadinejad said in a speech in the northern town of Ramsar, the semi-official news agency Mehr reported Wednesday.

"They are angry with our nation. But we tell them 'so be it and die from this anger'. Rest assured that if you do not respond to the divine call, you will die soon and vanish from the face of the earth," he said.

The outspoken president also maintained Iran's defiance over its controversial nuclear programme, saying it was on course to fully master nuclear technology.

"Thank to God's help, we have gone all the way and are only one step away from the zenith. [...]

(hat tip: TammyBruce.com) Ahmadinejad says they hope to have "the big nuclear celebration" by March 2007.


The Chatterbox Chronicles has a very good post on the Iraq Study Group:

The Iraq Surrender Group
LMC has some great commentary and links, and a
Posted by Chas at 10:12 AM

Excellent "stuff!" as usual. The cartoon says it all actually. ;-) You've done what I do - end up putting important, yet unrelated, "notes" together. Wish Pelosi would quick - turn into Jeane Kirkpatrick!

Jeane Kirkpatrick had been a lifelong Democrat. It was San Francisco Democrats like Pelosi, who came to dominate the party, who made Kirkpatrick so unwelcomed in her own party, that she eventually switched to Republican. Pelosi is practically a polar opposite of Kirkpatrick. Where CAN we get another like Jeane?

I appreciate the info on Kirkpatrick. Mike did a great tribute post on her also and I'm ashamed to say I didn't know much about her before this. I'm going to be doing a lot more research on her.

I wish I could have done a more proper tribute, more of a biography, but time does not allow. I had to settle for a quick mention of her passing, and a link to that excellent speech she gave in 1984.

The last picture is the most recent I could find of her. She looks happy, I'm glad for that.

You're welcome for the link, I find the Surrender Group just too irritating.