Iran, Syria and the Hamas government -- sowing the seeds of the first world war of the 21st century?

It's not unique to Islam or the middle east, there are historical precedents for this type of behaviour. It's important to understand this, and to not foolishly support this kind of behaviour as some kind of clinical depression. It has more to do a pathology of politics and brain-washing.

And excellent article about this is: Politics, not pathology; The psychology of suicide terrorism, By Irwin Mansdorf. An excerpt:

...Palestinian terrorists themselves have denied any link between clinical psychological symptoms and their attacks. As stated by one such terrorist, "This is not suicide. Suicide is selfish, reflects mental weakness. This is istishad (martyrdom or self-sacrifice in the service of Allah)."

In a series of interviews with would-be suicide bombers, Dr Jerold Post of George Washington University describes how group pressure and identity motivates terrorists to action: "The group members psychologically manipulated the new recruits, persuading them, psychologically manipulating them, "brainwashing" them to believe that by carrying out a suicide bombing, they would find an honoured place in the corridor of martyrs, and their lives would be meaningful; moreover, their families would be financially rewarded. From the time they were recruited, the group members never left their sides, leaving them no opportunity of backing down from their fatal choice." As stated by Post, "Terrorism is not a consequence of individual psychological abnormality. Rather it is a consequence of group or organisational pathology that provides a sense-making explanation to the youth drawn to these groups."

Thus, while clinical psychological symptoms may not be a factor in the motivation of the suicide bomber, general psychological techniques do play a role in creating the group psychology that fosters this behaviour. With respect to Palestinian groups, these factors include a culture where suicide bombers are viewed as heroes and where families of bombers are showered with both respect and financial reward.

Mansdorf also discusses in the historical precedents of murder-suicide, and how the clinical depression pathology diagnosis is used as a political tool, even though empirically there is no evidence to support it. You can read the whole thing HERE.

In another article, Dr. BABU SUSEELAN talks about a deep-rooted pathology stemming from "addictive thinking" on Islam:

Jihad terrorism is not over the policies of US, Israel, and India, or due to globalization, social change, poverty, economic deprivation or lack of self-esteem, but rather the ideology, the cognitive-behavior processes of Jihad Muslims. Terrorism, bombing, beheading and suicide murder are symptoms of a deep-rooted pathology stemming from their "addictive thinking" on Islam. The Islamic "addictive thinking" convinces jihad terrorists that attack on infidel would restore Islamic pride and prove to the infidel world that Jihad warriors are full of confidence and Islamic pride. The root cause of jihad terrorism is to be found in the defective, dangerous dogma that binds Jihad Muslims around the world together. The Jihad Muslim's thinking process and behaviors are sanctioned in Islam. What is less understandable is how and why mindless liberals fall prey to so much distorted thought...

Further on in the article, Dr. Suseelan goes one to describe the anatomy of Jihad terrorism:

Jihad Terrorists are followers of Islam, which is a control system, a closed dogma and it is designed to exclude dialogue, outside input, and forbid freethinking. Whatever Muslims do, wherever they go, Muslims are mandated to maintain status quo and the closed paradigm. Muslims are forced to neutralize new ideas by the power and control system of the clergy.

Islamic states use force and other control mechanisms to maintain equilibrium and the closed Islamic thought system. Islamic states and Islamic religious leaders never tolerate dialogue, rational thinking, pluralism, secularism and religious tolerance. They behave like an evil empire and maintain absolute control and authority to crackdown free inquiry and secular ideas for the maintenance of the Islamic toxic order.

For Muslims, maintaining the closed-system is more important than social progress, democracy, and free spirited discussion. As a result, Muslims get "chewed up" by the dogmatic system and are willing to sacrifice their life through suicide murder, terrorism and violence.

In spite of rapid changes in science, technology and information system, Muslims spend their energy to reinforce their closed-system and make their society into "islands of no-change" where individual freedom and creativity are crushed. Islamic societies maintain their equilibrium through control, force, punishment and power. For Muslims living under closed system, don't worry about modern education, women's freedom, art, literature, philosophy and spirituality and ignore transcendental needs. They shut the door on science, technology and information if it is not deemed "relevant" to maintaining closed Islamic dogma...

The article goes on to discuss breaking through the Islamic closed thought system, as a means of defusing and dispersing the pathology of murder-suicide terrorism.

You can read the entire article HERE.

Tell me this isn't a suicide-murder cult: 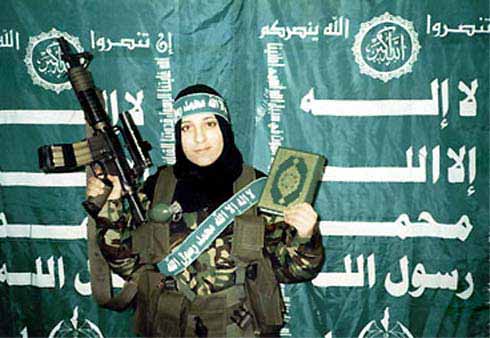 Photo is from the article Lady killers By Mona Charen. An excerpt:

Reem al-Riyashi was a normal-looking 22-year-old Palestinian woman. On Jan. 14, she strapped several pounds of explosives and nails to her body and approached an Israeli security checkpoint in the Gaza Strip. The Israelis usually forbid any Palestinian who sets off the metal detector from approaching further. But al-Riyashi, limping and weeping, pleaded with Gal Shapira, the commander of the watch. She explained that she had recently undergone surgery and had a metal plate in her leg that set off the machine.

Shapira told her to wait while he called a female officer to conduct a search. That act of compassion cost him his life. When al-Riyashi was ushered into a private room, she detonated her body bomb killing herself and four Israelis (including Shapira) and wounding at least a dozen others, including several Palestinians...

Instead of calling these people "suicide" bombers, it might be more accurate to call them "homicide bombers". But whatever we call them, they certainly shouldn't be financed and encouraged. They must be stopped, before they use the ultimate murder-suicide bomb... the one Iran is determined to have, and probably use.
Posted by Chas at 9:36 AM

I've tried and tried to get my mind around these people and this is a very good analysis. It fits what I Intuitively felt, but could not articulate.

I started off this post with a link to Cox & Forkum, with the title about Iran, Syria and Hamas wanting to start WWIII. It might seem that I changed the subject, but actually, I think this murder-suicide CULT pathology gets right to the heart of the matter.

I've wanted to write about this for some time now, but the subject is... difficult, not to mention unpleasant. But then I came across these articles, and they explained it so succinctly, and pulled together so many ideas I had read about before. I thought, these are worth linking to and posting about.

The photo of the 22 year old palestinian suicide bomber, Reem al-Riyashi. Look at her face. She looks crazed... "brainwashed" is the word that leaps out at me. I've seen that expression on others too. I also have a another photo of her, posing like that with her weapon and her small son, with him dressed up like she is.

The article described her as a "normal looking" palestinian woman. Does that mean most palestinian women have that crazed look? Sh*t. Look at the horror she committed. You can guess what the kids are being raised like.

I don't think it's human nature to be like that. People are made that way, INTENTIONALY, not by circumstance.

There is a lot more to say about this murder suicide pathology, but these articles showed me that it's important to point out that it's NOT the clinical depression pathology that the liberals spin it as. THIS pathology is a very, very different creature, and as long as the liberals continue to spin it as clinical depression, caused by the "nasty" jews, they hide the real causes and also enable this horror to continue unabated.

Thank God Bush cut the funding! Shouldn't we have stopped giving money to these fanatics long ago? And look who's moving in to fill in the gap to finance Hamas; our "friends", Saudi Arabia, UAE, Kuwait and Russia, too. Iran is also kicking in $50 million.

Bush still wants to give the aid to the palestinian people via charitable organizations. I can appreciate that he wants to be... diplomatic. I'm just wondering if it might be a better idea to kick their asses first.

Perhaps its just as well that Bush isn't a hot-head. But whatever happens, we need to start getting REAL with these folks. There has been too much BS, for too long. Any culture or religion that raises people to be human bombs needs to be forced to change, or destroyed. To continue to tolerate it only emboldens them to believe we are too weak to oppose them, and invites our own destruction.

Well said, I use the term Splodey.
reason is, Splodey has no human overtures. These people are not human, they are walking wastes of flesh.
Homicide Bombers or suicide bombers give them credit for an act that is against human nature. Splodey or POS either one is ok with me.

Yes, it IS very much against human nature! So how does one go from prosperous housewife and mother of two children, to "Splodey"?

In my new post, I look at her case a little more closely. It seems there is an element of "honor killing" involved with her "selection". Totally barbaric.