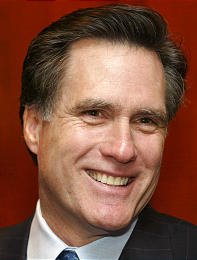 Here is one Republican's response to the health care problems of his State. Might these solutions also be viable answers for other states to use in the growing health care crisis America faces?

The Governor of Massachusetts, Mitt Romney, has written a piece for the Opinion Journal called:

"Health Care for Everyone?
We've found a way."

In the article, the Governor makes the amazing claim that:

...Every uninsured citizen in Massachusetts will soon have affordable health insurance and the costs of health care will be reduced. And we will need no new taxes, no employer mandate and no government takeover to make this happen...

...I assembled a team from business, academia and government and asked them first to find out who was uninsured, and why. What they found was surprising...

The Governor talks about the several different different steps they took to bring this about, and the bi-partisan effort to make affordable health insurance available to every citizen in the state. Many of the ideas seemed quite sensible, and could be adapted by other states. The article isn't long, and is worth a read.

The Governor holds an interesting position in his state, considering that only 13% percent of the registered voters in Massachusetts are registered as Republican. It seems that all the Governors since Michael Dukakis have been Republican; I expect the tax burden in the state just became too great, and even the Democrat voters felt some balance was needed. Romney has a strong business background and an interesting resume.

He is also a Mormon, married 36 years with five sons and eight grandchildren. His wife was diagnosed with MS in 1998. He opposed gay marriage in MA, but was unable to stop it. Here he is in a 2005 photo with his wife, Ann: 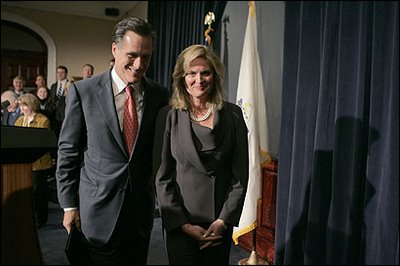 Many people think he has potential to be a major presidential candidate in 2008. I have some doubts about that; I'm not sure a Mormon could be elected president. Religion in itself can be controversial, but the Mormon church ... while it has attained a certain amount of mainstream respectability, could still be controversial. But if he does make a run for it, we shall see.

My problem with Romney is I know someone who works in conservative politics in Massachusetts. He tried to hire her to help run his campaign to make him "look" more conservative. She knows him well and knows he's not a conservative. And she refused to help him "look" better & deceive true conservatives. Because of knowing that I can't support him at all.

I'm curious, did your friend offer any examples?

I don't know a lot about him. I have wondered though, how a Republican gets elected in a state with only 13% Republican voters. It seems to me that he would be forced to compromise a lot, in order to get anything done.

I have read from several sources that taxes in MA are not as bad as they used to be. Romney has business experience and seems to have a business approach to problem solving. He has angered Muslims in his state by suggesting they should be monitored and wiretaped. Some people claim he makes disparaging remarks about MA when speaking outside of the state.

I've read several negative articles about him in MA newspapers. What comes across is, that the writers are liberals, and they hate him because he is Republican and religious. Liberal blustering trying to pass itself off as news.

I think Romney's situation may be similar to Arnold Schwarzenegger. I don't think he's a real conservative; he's married to a Kennedy, how conservative is that? ;-)

But seriously, Arnold's very liberal, but inside the context of California, he's about as conservative as the Republicans can hope for. Republican's have been leaving California in droves for years; only a "liberal" Republican can hope to get elected as Governor anymore.

I expect Romney may be the same, but who can say for sure? I think there are a lot of RINO's in the party, more more shape-shifters than a Star Trek TV show.

So it's hard to know how to judge Romney, or a lot of Republicans these days. But even if he were to prove to be more conservative on a national stage, I doubt he could be a serious contender. It's one thing for Donnie and Marie Osmond to be famous Mormons; they're entertainers. A Presidential candidates' religion would be scrutinized a lot closer, and the Mormons have a lot of pretty weird beliefs that they don't like to talk about to non-believers. I'm not a Mormon hater or basher (I've known many I quite liked), but I have examined the religion pretty closly, and there are some pretty kooky beliefs in that church, that I think would make liberals and conservatives alike rather uneasy.

Anyhow, I'm not so much trying to sell "Romney" with this post (although a quick look seemed prudent), as I am looking at his ideas for lowering insurance costs and trying to ensure everyone. No matter what any of us thinks about MA, it will be interesting to see how it works out.

The plan attempts to enrole as many people as possible into Medicade, shifting the burden from MA taxpayers to the US taxpayer in general and forces people to buy insurance who do not want it.

So it is not really a "conservative" solution at all.

Healthcare costs will not come down in this nation until the customer starts having to write a check for everything he buys.

Chas,
You make some good points. I agree that he may be similar to Schwarzenegger but I wouldn't want Schwarzenegger for president either. He probably is the best MA can get but he definitely isn't the best the U.S. can get for President.

The Mormom religion is a cult for a reason. I know a lot about it. I'm not sure I'm worried about your everyday politician being one because it means they are very moral. But I'm not sure I want a mormon president.

I need to ask my friend what she thinks of Romney's healthcare plan. And I will ask for examples too.

I'd like to hear your friend's opinion. I haven't lived in MA since 1980, so I'm rather out of touch with current local politics there.

They discovered that about 20 percent of people who were eligable for Medicade were not using it; so they made it easy for hospitals to automatically register them for it. That saved State taxpayers from having to foot the bill directly (although yes, we all pay for Medicare with taxes too).

They also used a general fund set aside to pay for treatment of people without insurance, to instead subsidize them so they could buy insurance; this ended up costing less than paying for their treatment directly.

You can argue that Medicade and subsidizing insurance are not truely conservative solutions; but by using existing systems and funds more efficiantly, they have avoided creating new taxes and a new costly bureaucracy of socialised medicine, ala the Clintons.

So in THAT sense, you can say it's more conservative than the Clinton Democrat alternative. Medicade is not going away anytime soon, and I rather appreciated Romney's business approach to the problems. Considering his constituency, I thought it was impressive.

When I lived in Boston, it was full of hard-core communists and radical leftists (Boston has over 300 colleges and univerities). It's probably even worse now. It's interesting to see someone with business sense try to work with such people. It will be interesting to see if they have any real success.

True the plan as it is right now is less evil than full socialized health care. However we all know how these things play out. The program will wind up costing tens or hundreds of times as much as anyone now thinks it will and will be impossible to do away with.

Look at what happened with TenCare in Tennessee. It is bankrupting the state, but cannot be eliminated or even reformed in any meaningful way.

I'm glad someone is trying to do something about the problem, but only a true market based (no government involvment at all)solution will work.

Anything else is just fussing with the dinner menu on the Titanic.

In a blue state, "less evil" is sometimes the best you can hope for. I hadn't heard of the TenCare plan before, it sounds awful. Government solutions can be worse than the problems they are supposed to solve, especially when they are rigid and inflexible.

It remains to be seen how the MA plan will work out. I think Romney is hoping it will have kicked in and be working well by the time he annouces he's running for president, so he can boast about what he did. We'll have to wait and see what actually happens.

There is an article on Romney's plan on the American Spectator website. It is worth a look.

Thanks for the link, the Spectator article made some good points, I've added it as a hyperlink reference at the end of the blog post.

I also added a link from another blogger, who claims Romney is doing well in the polls in the South.

There is a demographic that does find Romney appealing. It seems to me that the definition of what a conservative is, is being redefined, but who is doing the redefining, and where exactly it's going I can't say.