Hirsi Ali, facing deportation, decides to leave Holland and come to the US 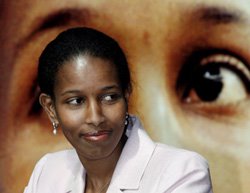 Hirsi Ali to quit parliament and the Netherlands

Controversial politician Ayaan Hirsi Ali looks set to leave the Netherlands. The conservative member of parliament will announce later this week that she is to move to the United States where - according to Dutch newspaper de Volkskrant - she will be working for the American Enterprise Institute, a conservative think tank based in Washington D.C.

Hirsi Ali's quitting of Dutch politics and the Netherlands follows on from a television documentary, shown last week, which reported that she lied in the early 1990s about how she fled her native country, Somalia, in order to gain asylum in the Netherlands. Since the broadcast, there have been calls from various quarters for her to lose her Dutch passport.

Stormy
Ayaan Hirsi Ali's departure from the Netherlands bears a strong resemblance to her arrival on the country's political stage: stormy and with a 'big bang'. Right from the outset, in 2003, she was the focus of much attention, and her clear and tough position towards Islam helped put that subject at the very top of the national political agenda. People are either for her, or against her - there seems to be no middle ground when it comes to opinions about Ms Hirsi Ali.

The latest, rapid developments surrounding her were sparked by the television documentary, in which journalists took a closer look at the story Ms Hirsi Ali told the immigration authorities when she arrived in the Netherlands in 1992. At the time, she did not provide correct information about her name, her age or the country from which she had travelled to the Netherlands. And it was partly on the basis of these inaccurate details that the Somali-born refugee later became a naturalised Dutch citizen in 1997...

You can read the entire article HERE.

What many of these articles don't mention is that in 2002 Hirsi Ali confessed that she lied on her asylum application to immigrate to the Neatherlands. She did so publicly, before running for and winning a seat in the Dutch Parliament. No one made an issue of it at the time.

However, since then she has changed parties, leaving the socialist labor party in favor of the conservative "liberal" party. No doubt that has turned some people against her. As for the details of what's happening, right now there seems to be more questions than answers.

Hirsi Ali's resignation speech to parliament is great, it answers some questions, too. Some excerpts relating to her immigration status:

... But why am I not remaining in parliament for my full term, until next year’s election? Why, after only three and a half years, have I decided to resign from the Lower Chamber?

It is common knowledge that threats against my life began building up ever since I first talked about Islam publicly, in the spring of 2002. Months before I even entered politics, my freedom of movement was greatly curtailed, and that became worse after Theo van Gogh was murdered in 2004. I have been obliged to move house so many times I have lost count. The direct cause for the ending of my membership in parliament is that on April 27 of this year, a Dutch court ruled that I must once again leave my home, because my neighbors filed a complaint that they could not feel safe living next to me. The Dutch government will appeal this verdict and I grateful for that, because how on earth will other people whose lives are threatened manage to find a place to stay if this verdict is allowed to rest? However, this appeal does not alter my situation: I have to leave my apartment by the end of August...

What a way to live! It's practically impossible for her to stay. About her asylum application:

... Another reason for my departure is the discussion that has arisen from a TV program, The Holy Ayaan, which was aired on May 11. This program centered on two issues: the story that I told when I was applying for asylum here in Holland, and questions about my forced marriage.

I have been very open about the fact that when I applied for asylum in the Netherlands in 1992, I did so under a false name and with a fabricated story. In 2002, I spoke on national television about the conditions of my arrival, and I said then that I fabricated a story in order to be able to receive asylum here. Since that TV program I have repeated this dozens of times, in Dutch and international media. Many times I have truthfully named my father and given my correct date of birth. (You will find a selection of these articles in the press folder). I also informed the VVD leadership and members of this fact when I was invited to stand for parliament.

I have said many times that I am not proud that I lied when I sought asylum in the Netherlands. It was wrong to do so. I did it because I felt I had no choice. I was frightened that if I simply said I was fleeing a forced marriage, I would be sent back to my family. And I was frightened that if I gave my real name, my clan would hunt me down and find me. So I chose a name that I thought I could disappear with – the real name of my grandfather, who was given the birth-name Ali. I claimed that my name was Ayaan Hirsi Ali, although I should have said it was Ayaan Hirsi Magan...

... Following the May 11 television broadcast, legal questions have been raised about my naturalization as a Dutch citizen. Minister Verdonk has written to me saying that my passport will be annulled, because it was issued to a person who does not hold my real name. I am not at liberty to discuss the legal issues in this case.

Now for the questions about my forced marriage. Last week’s TV program cast doubt on my credibility in that respect, and the final conclusion of the documentary is that all this is terribly complicated. Let me tell you, it’s not so complex. The allegations that I willingly married my distant cousin, and was present at the wedding ceremony, are simply untrue. This man arrived in Nairobi from Canada, asked my father for one of his five daughters, and my father gave him me. I can assure you my father is not a man who takes no for an answer. Still, I refused to attend the formal ceremony, and I was married regardless. Then, on my way to Canada -- during a stopover in Germany -- I traveled to the Netherlands and asked for asylum here. In all simplicity this is what happened, nothing more and nothing less. For those who are interested in the intimate details of my transition from a pre-modern society to a modern one, and how I came to love what the West stands for, please read my memoir, which is due to be published this fall...

(bold emphasis mine) She says lots more in her speech, about her work, what she wanted to achive and what was actually possible; thanking people and expressing gratitude to Holland and the Dutch people. It seems she was not going to stand for election again in 2007, because she wanted to bring her work to an international audience. It looks like she won't have to wait, and can now begin doing just that.

You can read her entire speech HERE.

Ayaan Hirsi Ali: "I am not an Islam basher"

Hirsi Ali and the battle between secularism and pluralism