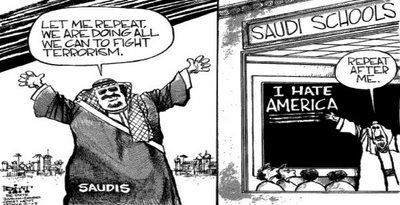 Looks like more two-faced tricks from the Wahhabi cultists. The textbooks used in Saudi government schools were filled with hateful anti-western propaganda. We complained, and now, the Saudi's assure us, this situation has been corrected. From and article in the Washington Post called "This is a Saudi textbook. (After the intolerance was removed.)", here are some excerpts:

...A 2004 Saudi royal study group recognized the need for reform after finding that the kingdom's religious studies curriculum "encourages violence toward others, and misguides the pupils into believing that in order to safeguard their own religion, they must violently repress and even physically eliminate the 'other.' " Since then, the Saudi government has claimed repeatedly that it has revised its educational texts.

Prince Turki al-Faisal, the Saudi ambassador to the United States, has worked aggressively to spread this message. "The kingdom has reviewed all of its education practices and materials, and has removed any element that is inconsistent with the needs of a modern education," he said on a recent speaking tour to several U.S. cities. "Not only have we eliminated what might be perceived as intolerance from old textbooks that were in our system, we have implemented a comprehensive internal revision and modernization plan." ...

Well that SOUNDS good, doesn't it. But like so many things involving the Saudis, you have to ask, "Is it true?" Read on:

...A review of a sample of official Saudi textbooks for Islamic studies used during the current academic year reveals that, despite the Saudi government's statements to the contrary, an ideology of hatred toward Christians and Jews and Muslims who do not follow Wahhabi doctrine remains in this area of the public school system. The texts teach a dualistic vision, dividing the world into true believers of Islam (the "monotheists") and unbelievers (the "polytheists" and "infidels").

This indoctrination begins in a first-grade text and is reinforced and expanded each year, culminating in a 12th-grade text instructing students that their religious obligation includes waging jihad against the infidel to "spread the faith."

Freedom House knows this because Ali al-Ahmed, a Saudi dissident who runs the Washington-based Institute for Gulf Affairs , gave us a dozen of the current, purportedly cleaned-up Saudi Ministry of Education religion textbooks. The copies he obtained were not provided by the government, but by teachers, administrators and families with children in Saudi schools, who slipped them out one by one.

Some of our sources are Shiites and Sunnis from non-Wahhabi traditions -- people condemned as "polytheistic" or "deviant" or "bad" in these texts -- others are simply frustrated that these books do so little to prepare young students for the modern world.

We then had the texts translated separately by two independent, fluent Arabic speakers...

(bold emphasis mine) The Saudi public school system totals 25,000 schools, educating as many as 5 million students. These books are not only used there, but in also world wide in "acadamies" sponsored by the Saudi government. How these books are used and what they contain is appalling:

...Saudi Arabia also distributes its religion texts worldwide to numerous Islamic schools and madrassas that it does not directly operate. Undeterred by Wahhabism's historically fringe status, Saudi Arabia is trying to assert itself as the world's authoritative voice on Islam -- a sort of "Vatican" for Islam, as several Saudi officials have stated-- and these textbooks are integral to this effort. As the report of the commission investigating the Sept. 11 attacks observed, "Even in affluent countries, Saudi-funded Wahhabi schools are often the only Islamic schools" available.

Education is at the core of the debate over freedom in the Muslim world. Al-Qaeda leader Osama bin Laden understands this well; in a recent audiotape he railed against those who would "interfere with school curricula."

The passages below -- drawn from the same set of Saudi texts proudly cited in the new 74-page review of curriculum reform now being distributed by the Saudi Embassy -- are shaping the views of the next generation of Saudis and Muslims worldwide. Unchanged, they will only harden and deepen hatred, intolerance and violence toward other faiths and cultures. Is this what Riyadh calls reform?

" Every religion other than Islam is false."

"True belief means . . . that you hate the polytheists and infidels but do not treat them unjustly."

"Whoever obeys the Prophet and accepts the oneness of God cannot maintain a loyal friendship with those who oppose God and His Prophet, even if they are his closest relatives."

"It is forbidden for a Muslim to be a loyal friend to someone who does not believe in God and His Prophet, or someone who fights the religion of Islam."

"Just as Muslims were successful in the past when they came together in a sincere endeavor to evict the Christian crusaders from Palestine, so will the Arabs and Muslims emerge victorious, God willing, against the Jews and their allies if they stand together and fight a true jihad for God, for this is within God's power."

"As cited in Ibn Abbas: The apes are Jews, the people of the Sabbath; while the swine are the Christians, the infidels of the communion of Jesus."

As it goes on, it gets worse. What it says about blood money and the value of women... has no place in this century. If this is from "reformed" textbooks, can you imagine what the old texts must have said? Of course, you have to ask if our "friends" the Saudis even reformed anything at all. It would not be the first time they told us one thing publicly, while they did something else entirely. These "lessons" lead up to fully endorsing Jihad. Is it any wonder that the majority of 9-11 terrorists were Saudis? What else could come from such an "education"?

It's worth reading the whole article, which you can do HERE.

WAHHABISM; the form of Islam
that tolerates no other

This is really disturbing that these are the "revisions."

And these are our friends! With frien.....never mind.

It's estimated that Saudi money has enabled Wahhabis to take over 70-80 percent of American mosques. Can you imagine this crap being taught right here in our own country?

I'm not sure which is more disturbing; the crap they teach, or the lies they tell us about it. It's high time we stop putting up with both.