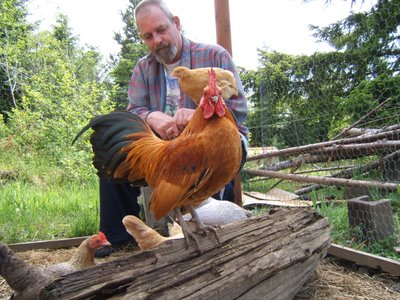 Here is a photo of Pat sitting in the run. We have intergrated the pullets with the Bantams, and they seem to get along just fine. We have moved them all together in the largest run, and they seem to enjoy the extra space. In the forground is Bantam Bertie Rooster. In the background, sitting on Pat's arm, is the buff pullet "Runtie". She is slightly smaller than the others, very shy, and is often picked on. When ever Pat is in the run, she flies up to him.

There has been high drama in the coop this week: 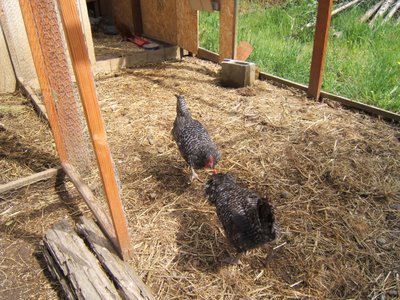 The 3 stooges, the unsexed chickens our neighbors gave us, are not so funny anymore. They are acting very "cocky" these days. Here they are, going at it with each other: 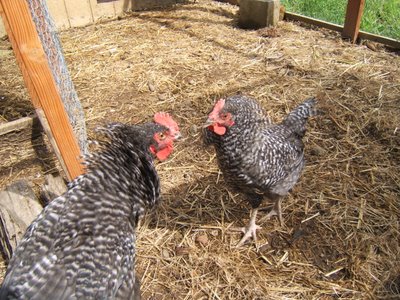 They've started to do the flaring neck "jurassic park" thing. Dinosaurs with feathers! 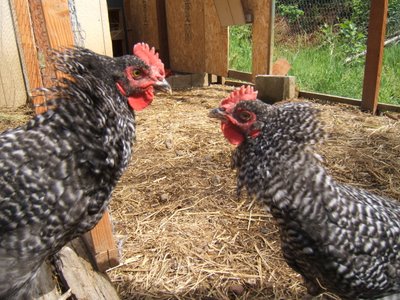 They pick on the pullets, so they can't live with them. They pick on the Bantams; I caught one of them biting Bertie Rooster in the back of the neck in a firm grip, trying to kill him. So they have to live by themselves, and their names need to be changed to something like, breakfast, lunch and dinner. I'd call them Thanksgiving, Christmas and New Years, but those are Turkey names ;-)

Alfie, Bettie and Cecil have also had to be kept separate, as they don't get along with the pullets, Bantams or stooges. No one has lost their heads... yet. But we are running out of space. It's easy to understand why people eat roosters.

And as if we don't have enough space problems, the population of Bantams continues to grow: 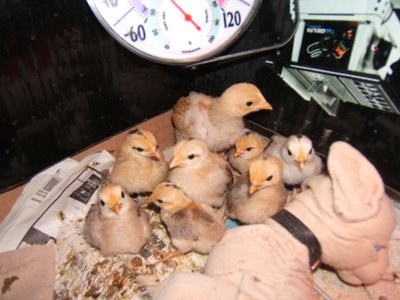 These ones in the picture are all hatched by Turendot. But now the Bantam renigades with their illegal nests UNDER the nesting box, have began hatching theirs... three so far. But I will have leave this story for the next Farm Report. I've got chicken coop "issues" I need to deal with today, now that the rain has stopped.

So I'll end this with the special report mentioned last week:

DEVIL DUCKIES
Everyone thinks they are so cute. Well o.k., I guess they ARE, especially when they are ducklings... but any parent should think twice before putting one of these MONSTERS in some unsuspecting kid's easter basket.

Why is it nobody ever talks about the CLAWS these things have? Look at these: 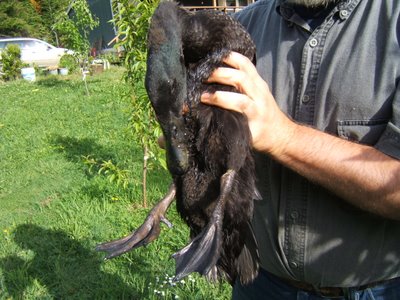 Andy is holding them the safe way; feet OUT. There is a claw on the end of each toe, and on the back heel. Those claws are there, and sharp, even when they are ducklings. As they get older, the claws just get bigger and sharper. 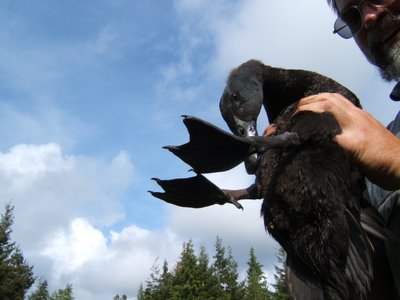 Because of the claws, you have to hold them feet out, or tuck them in close against your body. But they can still scratch you when they kick, so wear a thick shirt or a jacket. AND, something else no one talks about... those "cute" little webbed feet. As if the claws aren't bad enough... if they have been standing in duck poop, and you pick them up, they use their poopy feet like trowels and smear it all over your clothes. They are dirtly little devils! When I have to carry them both at the same time, one tucked under each arm, I make sure to wear my old beat up windbreaker or something that I won't mind getting soiled.

It almost seems unfair to call them dirty, because they love the water so much and are constantly grooming themselves: 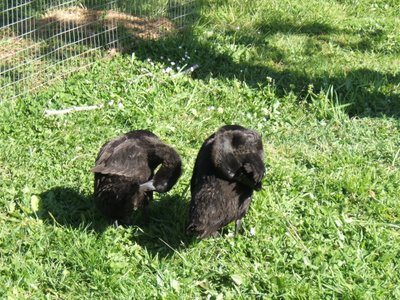 They can rotate, angle and turn their heads in more directions than Linda Blair.

Here they are in their new plastic wading pool: 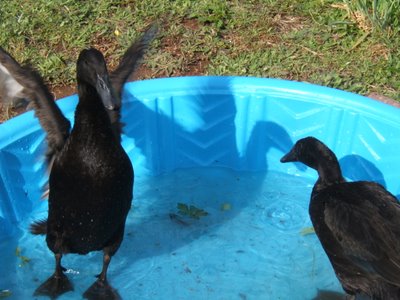 They prefer only an inch or two of water; they won't go into the pool if it's full. They love to forage for things in the water. Whenever I want them to try a new kind of food, I just drop it in water, and they go for it. 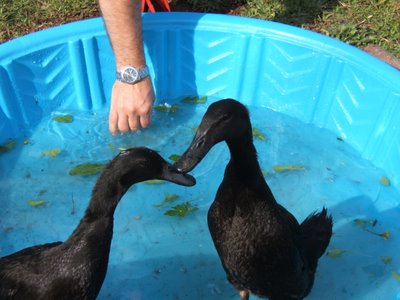 They are very fond of eating slugs, which is fortunate because we have a lot of them. They love to eat them in the pool, but will also forage them out of the grass.

I think they are a pair, male and female. She is slightly bigger, and doesn't quack but squeeks. She will eat out of my hand, is calmer, and doesn't kick as much when I hold her.

He is smaller, has a white spot on the back of his head, quacks a lot and likes to make a fuss whenever I pick him up. He is excitable and bold. I'm not positive about their sex, but that is the way it seems to me. We call him Daffy, and her Dilly. 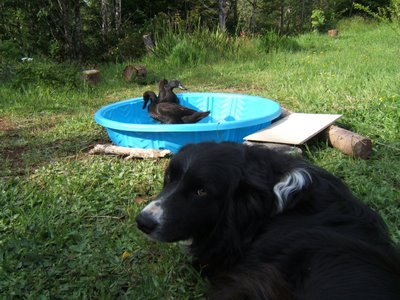 Digby watches over them from a safe distance. The ducks often like to be near him, they will follow him around the yard, but at the same time, they don't like him to get too close, and will snap at him if he comes too near. When I guide the ducks back to their pen with a stick, Digby likes to follow; I think he wants to herd them.

And that's it for this weeks Farm Report!

I'll pack up some slugs and send 'em on down!

You manage to keep it completely clean and still use a lot of fowl language.

I'm glad we've chosen to buy our chickens already dressed out at the grocer's. The politics of the chicken yard is just beyond me.

This could/should be a made-for-TV dramatic mini-series.

Hey Chas, in that top photo, which one is Patrick, the one in the orange sweater or the big one in back?
PS: Don't show him this post or he might stop running my retarded stories :)

What the Duck is going on in Oregon these days, That place has sure gone to the birds...

After a long day at work, the farm report was eggsactly what I needed.