I've previously posted about the OLPC project, (One Laptop Per Child), making cheap laptop computers availible for children in developing nations. Well, it seems they aren't the only ones. OLPC has competition.

Intel has created a similar, but more expensive flash memory laptop called The Classmate PC. It uses 1 to 2 gigs of flash memory, can run Windows or Linux, and is currently in the $400 price range. 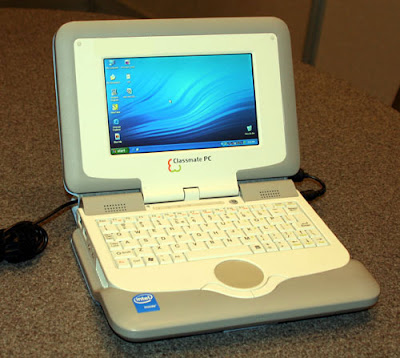 They are higher priced than the OLPC machines, which last I heard were going to be $175 each. But the Classmate also has a bit more ability; it's able to run a version of Windows XP, which the OLPC machine is unable to do currently. 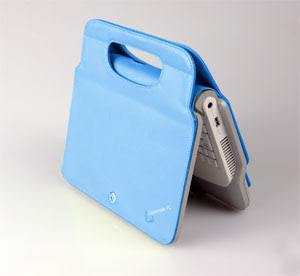 The Classmate PC program is also a bit further along than OLPC, having already produce and tested units in the field. 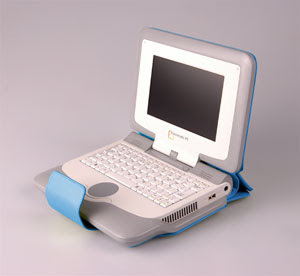 The devices have already undergone trial runs in Nigeria and Brazil, where they have been enthusiastically embraced. Intel has two videos from these trials on their website: 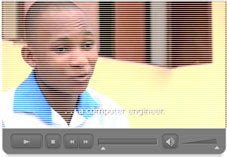 This pilot project launched in September 2006, at the Junior Secondary School in Jabi, Abuja, after a brief training session for four of the teachers. It has successfully completed its first academic term in the school curriculum.

The project objective was to explore the outcomes of a one-on-one experience of students with their own Intel powered classmate PC: how effective will new technology be as teachers teach students utilizing this new platform? The EEBP Bradesco Foundation of Campinas was established in 1975 to provide education for the children of employees. It subsequently expanded its mission to reach under priveldged children across the region and provide educational and professional opportunities to them.

This is great for the kids. The price of the laptops will probably drop, the more they are mass produced. Also, flash memory is being increasingly used in cell phones, ipods, pen drives and other devices; the more the chips are produced in mass quantities, the lower the price will, as it has been doing.

Both the Classemate PC and the OLPC units are made for children in schools; they are not available to the general public. Both programs take steps to insure that the units do not get stolen or resold for uses outside of schools.

Will such devices ever become available for the rest of us? Samsung is already making flash memory laptops for adults. They are still very pricey, but the prices will continue to fall as they become more common, and flash memory chips get cheaper.

I've read that India is also working on a classroom flash memory laptop of it's own. I've no doubt that the factories that build these kinds of machines are working on higher end commercial versions to sell eventually. But they have to be careful to not suddenly undercut the market for regular laptops, which these factories make for their big brand-name clients. It is most likely through those same clients that they will release flash memory machines for the rest of us.

If you would like to read a review of the Classmate PC, Riyad Emeran at TrustedReviews.com has one from last September: