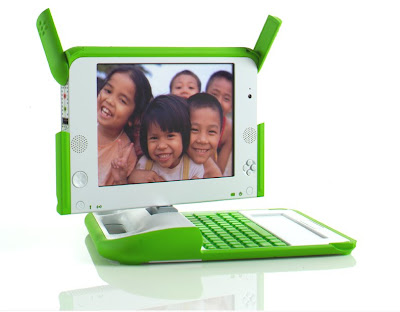 The One Laptop Per Child project, devoted to making low cost laptop computers available for schoolchildren in third world countries, is now considering also making the laptops available here in the USA.

From Chris Preimesberger at Desktoplinux.com:
OLPC Linux laptop could succeed in U.S.

The director of software for the nonprofit One Laptop Per Child project believes there is a big market for the self-powered machines in the U.S., provided the user wants to perform basic computer functions.

"The XO machine is quite sweet," the OLPC's Walter Bender wrote in an email to DesktopLinux.com today. "I guess the question boils down to what you want to do with the machine.

"If the goal is browse the web, send email, VOIP, chat, video conference, play movies and music, read, write, compose, draw, program, etc., then the XO is a great machine. If you want to play 'Grand Theft Auto III,' then it leaves something to be desired. From all indications, there is lots of demand for the former," Bender wrote.

Reuters news reported last week that OLPC founder Nicholas Negroponte recently said that the OLPC might market a version of its laptops in the U.S., reversing its previous position of only distributing them to the poorest nations.

"We can't ignore the United States. ... We are looking at it very seriously," Negroponte told at a press conference in Cambridge, Mass., according to the Reuters report.

Once known as the $100 laptop, the lime-green-and-white devices apparently are increasing in price. In February, the project estimated said they would sell for $150 each. Negroponte said their price tag for U.S. children would be $176 apiece, Reuters reported.

The laptop features a string pulley to charge its battery, a keyboard that switches between languages, a digital video camera, wireless connectivity, and an open-source Linux operating system tailored for remote regions. [...]

The article goes on about the potential for the US market (they cite a school laptop program in Maine, which I remember received a lot of enthusiastic support), and gives more details about the production of the units and the projects current status.

When I first heard about this project, I thought that it could also benefit kids right here at home. Why not sell it in the US, for a slightly higher price, and use the profits to subsidize the charity part of giving the units away to poor children? It looks like they are now considering doing just that.

I think they should also consider selling it commercially, to anyone who wants it. Why limit it to just kids? I think there are a lot of adults who would like to buy an inexpensive laptop that would let them do the things most people are interested in doing with their computers. Profits could then be used to subsidize the school programs. I hope they will do that eventually.

These laptops are a whole new way of thinking about and using computers. Hard drives are not the necessity they used to be, especially with Linux, and larger memory modules that can hold and run the entire operating system along with data files in RAM. I wish the project great success. 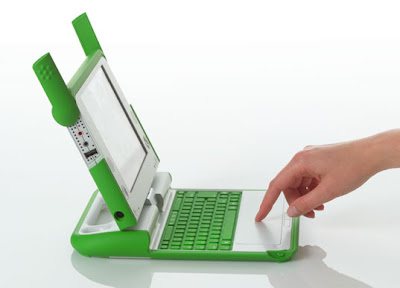 ONE LAPTOP PER CHILD by FuseProject
Read more about the laptop here, with more photos and many links, too.

great idea! I would use one myself.

Over at OLPC News, we once thought that right or wrong, OLPC would not be in USA schools. Now it seems there could be XO's in America, but only for Negroponte to make his 3 million "trigger."

Thanks for those links, they sure explain a lot. They definitely answered some of my questions.

Negroponte doesn't believe in "testing" as an educational concept... he anticipated opposition from American teachers unions... and the factory that makes the OLPC laptops doesn't want to alienate it's corporate clients by commercially offering low end laptops that would steal market share from them.

As interesting as this project is, I have wondered it they weren't going ahead too fast with the manufacturing, until more trials had been done. But too late now... it will be interesting to see if this bird will actually fly.