I support John McCain for President 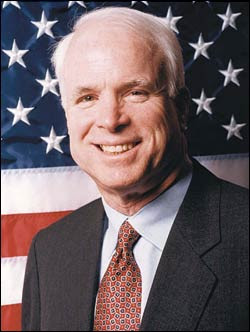 My original choice was Fred Thompson; then it was Mitt Romney. But the process of elimination has removed them from the race, leaving only McCain and Huckabee.

I doubt that Huckabee the spoiler has any chance at all (nor should he). So now we have John McCain in the lead. He was my third choice, but he's the one we got now, and I support him. I say, "Third time lucky"!

I shall post the reasons for my support later, when I've got more time (in the meantime, be sure and check out VDH on McCain). Today, I signed up for a new blog roll:

It's now in my sidebar. I hope you will consider joining up, too. You may also consider visiting John's website, for the latest news from his campaign:

From what I understand, even if Romney took all remaining states, he couldn't have won the primary. I too was a Fred and Romney supporter, but now I will support and vote McCain. He can win against both Dem's as long as he goes after the elderly voters (the ones that vote most).

Yes, I think he has every possibility of winning, I think swing voters will vote for him. I just hope the Republican base will unite and vote for him too.