Will Turkey bring Islam into the 21st century?

For a long time, I had ambivalent feelings about Turkey. I felt the Bush administration was too soft on them, too cooperative, too accommodating. But as I have read more and more about Turkey, and come to understand more about the situation there, I've come to better understand our policies in dealing with them. Among Islamic countries, Turkey is a very special place. While there might be much to criticize, there is also a great deal to praise and admire. I've criticized them a lot in the past, but in this post, I can only praise them.

I have found the following article astounding in it's implications: 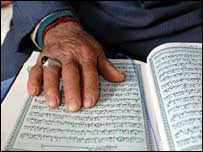 Turkey is preparing to publish a document that represents a revolutionary reinterpretation of Islam - and a controversial and radical modernisation of the religion.

The country's powerful Department of Religious Affairs has commissioned a team of theologians at Ankara University to carry out a fundamental revision of the Hadith, the second most sacred text in Islam after the Koran.

The Hadith is a collection of thousands of sayings reputed to come from the Prophet Muhammad.

As such, it is the principal guide for Muslims in interpreting the Koran and the source of the vast majority of Islamic law, or Sharia.

"This is kind of akin to the Christian Reformation. Not exactly the same, but... it's changing the theological foundations of [the] religion"
Fadi Hakura, Turkey expert, Chatham House

But the Turkish state has come to see the Hadith as having an often negative influence on a society it is in a hurry to modernise, and believes it responsible for obscuring the original values of Islam.

It says that a significant number of the sayings were never uttered by Muhammad, and even some that were need now to be reinterpreted.

Commentators say the very theology of Islam is being reinterpreted in order to effect a radical renewal of the religion. [...]

They are talking here about a very logical, educated, calm and rational look at the Hadiths, in context of all the history they were written in, and reinterpreting them for a modern world. This is practically unheard of in the Muslim world.

And in case you think this is just posturing on the part of the Turkish government, I would say look closer. Look at not just what they say, but what they are doing:

[...] As part of its aggressive programme of renewal, Turkey has given theological training to 450 women, and appointed them as senior imams called "vaizes".

They have been given the task of explaining the original spirit of Islam to remote communities in Turkey's vast interior.

One of the women, Hulya Koc, looked out over a sea of headscarves at a town meeting in central Turkey and told the women of the equality, justice and human rights guaranteed by an accurate interpretation of the Koran - one guided and confirmed by the revised Hadith.

She says that, at the moment, Islam is being widely used to justify the violent suppression of women.

"There are honour killings," she explains.

"We hear that some women are being killed when they marry the wrong person or run away with someone they love.

"There's also violence against women within families, including sexual harassment by uncles and others. This does not exist in Islam... we have to explain that to them."

According to Fadi Hakura, an expert on Turkey from Chatham House in London, Turkey is doing nothing less than recreating Islam - changing it from a religion whose rules must be obeyed, to one designed to serve the needs of people in a modern secular democracy.

He says that to achieve it, the state is fashioning a new Islam.

Significantly, the "Ankara School" of theologians working on the new Hadith have been using Western critical techniques and philosophy.

They have also taken an even bolder step - rejecting a long-established rule of Muslim scholars that later (and often more conservative) texts override earlier ones.

"You have to see them as a whole," says Fadi Hakura.

"You can't say, for example, that the verses of violence override the verses of peace. This is used a lot in the Middle East, this kind of ideology.

"I cannot impress enough how fundamental [this change] is."

(bold emphasis mine) They aren't just talking the talk, they're walking the walk! They are taking this out to the people, even in rural areas. Reinterpreted Islam may still seem like a strict religion to people in the West, but it's not near as harsh as Islam as practiced in places like Saudi Arabia or Iran.

I'd love to go through the whole article point by point, just to emphasize what a big deal this really is, to emphasize the "how" and "why" of it, but then I'd have to republish the whole thing here, so instead I would just urge you to read the whole thing. It's not very long, but it is very important. It's an answer to one of my most fervent prayers!

I know that this does not solve all problems, but I also know we are not at war with the whole of Islam. We NEED friends in the Islamic world, and in Turkey we may have friends well worth supporting.

Here is a link to a page that has this and all my other posts about Turkey:

Compilation of posts about Turkey and Turkishness

I was in Turkey just before we invaded Iraq. The Second Army was still sitting at the docks. I was in Istanbul, Ismir, and several smaller cities. I met and talked with local people. My impression of Turkey is of a modern democracy trying to cope with both radical Islam and the Kurds. The people I talked to were both well-educated and salt-of-the-earth types. To a person they were against Saddam and all he stood for and pleaded with me to recognize that though they were Muslim, they were peaceful people. They also like Americans, but not so much Europeans whom the Turks believe snear at them. Americans are enthralled when they visit, and it shows. I thoroughly enjoyed my time there.

Thanks for sharing that Michael. I've heard similar opinions from others who have visited, it sounds like a fascinating country.