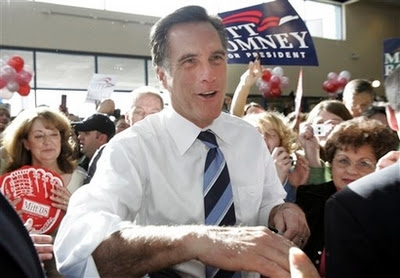 Romney aims for a split in California

DENVER - Republican Mitt Romney is conceding the bulk of the Northeast to rival John McCain, counting instead on his home state of Massachusetts, a split in California and wins in a series of caucus states to extend his presidential campaign beyond Super Tuesday.

If he fails to capture enough delegates to offset McCain's likely wins in other states and strong showing in California, where the Arizona senator has the backing of Gov. Arnold Schwarzenegger, Romney could end his campaign in Boston on Wednesday.

During a news conference Friday outside a Ford dealership here, he passed up three opportunities to declare he would carry on if he fails to surpass McCain in the Super Tuesday voting.

"I really thought it would all be over, you know, early in January, and now we're going to go into February, and I just can't predict what will happen in February," he said, "so we'll see what happens."

This week the multimillionaire former venture capitalist authorized only a modest $3 million advertising buy, after committing $35 million of his own money last year in an effort to lock up the nomination early with back-to-back wins in Iowa and New Hampshire.

While Romney won in Wyoming, Michigan and Nevada, McCain beat him in major head-to-head battles in New Hampshire, South Carolina and Florida. Huckabee prevailed in the leadoff Iowa caucuses. He has vowed to remain in the race, taking critical conservative support from Romney.

Currently, Romney trails McCain in delegates to the Republican National Convention, 83-59. A total of 1,191 are needed for the nomination.

Read the entire article for all the details. I don't like the sound of this at all. Huckabee may take just enough votes away from Mitt to sink him. Where is Huckabee getting his money to continue on? He can't win, but can only drag Romney down.

The Mack and Huck Show

[...] Where is Tonya Harding when you need her? Huckabee should have been kneecapped back before South Carolina. He has no money to run ads in the 23 Tuesday states but just having his name on the ballot is going to steal votes from Mitt. If I were a conspiracy-minded person, I would say that Mack and Huck have done a private dirty deal to take votes away from Mitt.

That leaves a bad taste in my mouth. If Mack picks Huck for VP, then it pretty much confirms my suspicions and I could not, in good conscience, bring myself to vote for them. I'd rather see them both in hell than in the White House. [...]

This is all like a nightmare to me. I won't get to vote until April, and if the MSM is right, it could all be decided on Feb. 5th. It stinks.

Tonya, where ARE you?