Attracting a crowd means what exactly?

The media has made a big deal over the crowd that Obama attracted in Portland OR this past weekend: 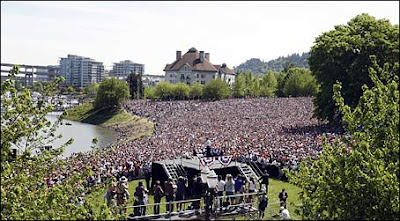 Record Obama Crowd, the Size of a City

PORTLAND, Ore. -- Sen. Barack Obama has seen his share of large crowds over the last 15 months, but his campaign said they have not approached the numbers gathered along the waterfront here right now.

The campaign, citing figures from Duane Bray, battalion chief of Portland Fire & Rescue, estimated that 75,000 people are watching him speak. [...]

I'm not surprised, nor do I find it especially remarkable. Oregon is a blue state. 2/3rds of the state's population live around the Portland Area. Portland is also on the border of Washington State, which is also a blue state.

The area from Portland to Seattle is heavily populated, and very left wing. Obama is often treated like a rock-star by his supporters, so why should it be surprising that he attracts rock-star crowds? That may have some value as a PR tool, but by itself doesn't mean much. I don't particularly want a rock-star president.

Heck, even Hitler could attract big crowds, but it didn't make him a good leader. No I'm not saying Obama is Hitler, I'm saying that a future president should have something more going for him than a personality cult following. Is it too much to ask for evidence of more substance, especially in one so inexperienced?

Why are American messiahs always Democrats?


UPDATE 05-21-08: The rock star comparison was much more apt than I realized. It seems that most of the media who reported on the event, failed to note that a very popular Portland Rock band performed for free prior to Obama's appearance: