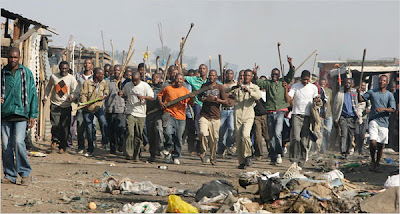 The backlash is occurring against both legal and illegal immigrants:

JOHANNESBURG — Violence against immigrants, like some windswept fire, spread across one neighborhood after another here in one of South Africa’s main cities at the weekend, and the police said the mayhem left at least 12 people dead — beaten by mobs, shot, stabbed or burned alive.

The violence continued to rage on Monday, as police fired rubber bullets and made arrests to try to quell the violence in and around Johannesburg, and said the death toll had reached 22, The Associated Press reported.

Thousands of panicked foreigners — many of them Zimbabweans who have fled their own country’s economic collapse — have now deserted their ramshackle dwellings and tin-walled squatter hovels to take refuge in churches and police stations.

On Monday, men wielding clubs and sticks patrolled along the road near one camp — apparently South Africans trying to prevent foreigners from returning, The A.P. said.

This latest outbreak of xenophobia began a week ago in the historic township of Alexandra and has since spread to other areas in and around Johannesburg, including Cleveland, Diepsloot, Hilbrow, Tembisa, Primrose, Ivory Park and Thokoza. 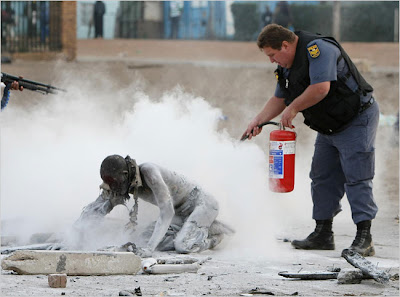 Amid so much violence, the police were spread thin, sending in squads of officers in armored vehicles. “We are using all available resources and will call in reinforcements if the need arises,” a police spokesman, Govindswamy Mariemuthoo, told reporters. [...]

The NY Times article goes on to blame rising food prices as one of the contributing factors. I don't doubt it. South Africa and Zimbabwe both used to export food to the rest of Africa. But then Zimbabwe's President Robert Mugabe forcibly took the farms away from white Zimbabwean farmers, and turned that country into a starving basket case, with 1000 percent inflation.

Since coming under majority rule, many in South Africa also want farms taken away from whites. Years ago I read that a white farmer is murdered every 3 days in South Africa. As a result many have immigrated out of the country. South Africa now has to import food just to feed itself. It's real cause for concern. A country that loses the ability to feed itself is in trouble.

The anti-immigration riots aren't new, but they have been increasing. When the majority government took over, they opened the borders to neighboring countries. Many MILLIONS of illegals poured into South Africa, straining an economy that already had high unemployment. As the situation in neighboring Zimbabwe worsened, many more people from there fled to South Africa.

The sooner Mugabe is removed from power in Zimbabwe, the better. Then Zimbabweans can return to their country and hopefully make it livable again, and take pressure off an already over-burdened South Africa.

As a south african, i can tell you its not 3 days per farmer that is murdered,its much more often! Just from a quick website, just google farm murders south africa,"Farm attacks in South Africa are 700% higher than attacks on farms in any other country on Earth"
The farmers are left to defend themselves,police are not deployed in farmers areas to protect them.They've made neighbourhood watch groups that drive about patroling the farms. Goverment wont do anything because they whites... If its not the attacks, it's the Goverment is also taking land away from whites(LAND DISTRUBUTION PROGRAM) I MEAN?! and giving it to blacks. Reverse apartheid. 2010 is a laugh, money that's pumped into it will reach some ANC 'fat cats'back pocket... The crime rate in south africa is ridiculous. Thats the problem living in africa. And if the situation worses which it is now with Xenophobia attacks happening, where we to go? (Whites,minority)?
Believe what you want, but SA is in a crisis.

White culture committing suicide. No where is it more evident in South Africa and Zimbabwe.

I'm saddened by this report.

All this chaos caused, aided and abetted by white liberals with a lust for white blood.