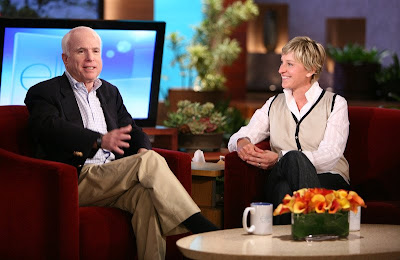 He praises Obama's strategy of trying to link him with Bush, but also rebuffs it. Of course Ellen, a Democrat and a lesbian, does ask the tough question:

[...] DeGeneres, who is planning her own gay wedding this summer, also asks McCain about the recent ruling by the California Supreme Court affirming gay marriage -- a flash point for religious conservatives (the video excerpt is here). DeGeneres lumps laws banning gay marriage with those that denied blacks and women the right to vote, and "Jim Crow" policies. McCain says "people should be able to enter into legal agreements, and I think that that is something that we should encourage, particularly in the case of insurance and other areas." But: "I just believe in the unique status of marriage between man and woman."

DeGeneres has none of that. "It just feels like there is this old way of thinking that we are not all the same," DeGeneres says. "When someone says, 'You can have a contract, and you'll still have insurance, and you'll get all that,' it sounds to me like saying, 'Well, you can sit there; you just can't sit there.'"

How does a politician respond to that? With a compliment preceding a "fuhgeddaboutit." Says McCain: "You articulate that position in a very eloquent fashion. We just have a disagreement. And I, along with many, many others, wish you every happiness." DeGeneres: "Thank you. So you'll walk me down the aisle? Is that what you're saying?" McCain: "Touché."

Obama and Clinton, it should be noted, hold similar views to McCain's on gay marriage. [...]

The politicians answer, pretty much what they all say. Most don't want to touch the issue, with good reason. John McCain is a centrist on many issues, and on this I wouldn't expect anything different. And in a tough election like this one, I think John McCain is the only Republican who would stand a chance to win.

You can see a video clip here of the "tough question" part of the show.

Is John McCain the ultimate centrist?