I read this in CNNmoney.com this morning, it's facinating: 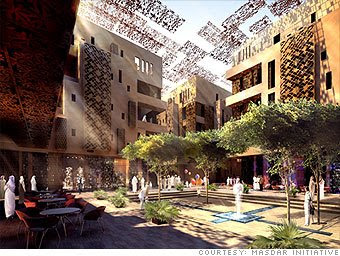 A green city blooms in the desert
Abu Dhabi, which reckons the world will wean itself from fossil fuels, is building a city that runs on solar power, recycles all waste, and bans cars. How will it work?

The leaders of Abu Dhabi have declared that petroleum belongs to the 20th century, so they are making an investment in the 21st century by building Masdar, the world's first zero-carbon, zero-waste city, powered almost entirely by the desert's plentiful sun. Ground was broken last winter for the $22 billion project, financed by the government of Abu Dhabi and outside investors and slated for completion in 2016. While more expensive to build than a traditional city, Masdar will use 75% less electricity and 60% less water.

Within the walls will be a green-tech research institute, developed with help from MIT. The city itself will act as a laboratory to test carbon-free products and prove that alternative energy can be deployed on a massive scale. "We want Abu Dhabi to be an energy player, not just an exporter," says Khaled Awad, Masdar's director of property development. [...]

It makes good sense to build such a city in a place where there is such an abundance of sunlight and heat. The article is divided up into ten short segments, each focusing on a different aspect of the New City and how it works. 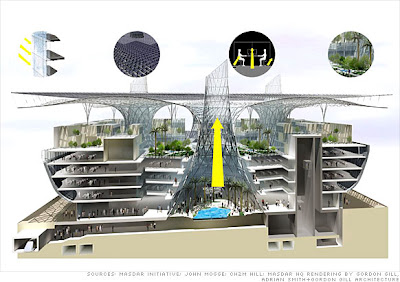 It's a quick read and there are plenty of graphics and diagrams throughout, I found it very interesting. And to think it could be finished by 2016. The future is practically here already!