More British Nonsense for the Holidays

Does this guy look like a criminal to you? 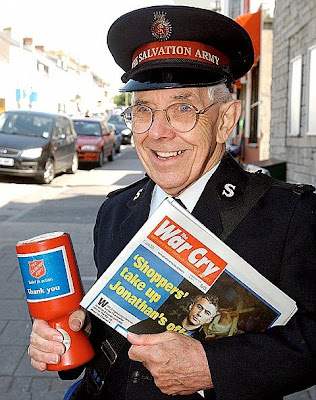 He will be if he shakes that can. He'll be arrested for "Religious Harassment".

After 130 years of fundraising, Sally Army told to stop rattling collecting tins because it might 'offend other religions'

[...] One collector told the Daily Mail: 'I've been doing this for more than 40 years and I fail to see how rattling a tin could cause offence. If I was shaking a tambourine I could do it all day - if I shake my tin, I could end up in court.'

The 'Silent Night' rattle ban manifested itself at the weekend in Uxbridge, West London, when musicians from two local branches performed outside a shopping mall.

(They were outside because traders complained last year they were too loud to play inside).

Tony Keywood, shopping with his wife Sheila, was among a crowd enjoying the carols and stepped forward to make a donation.

'I jokingly told them off for not shaking their tins,' said Mr Keywood, 78, a retired telecoms executive. 'They said they weren't allowed to do that in case it caused offence to other religions. They said they'd been told rattling a tin was considered to be intimidating.

'I don't know who makes up these rules but I suspect it will have something to do with human rights. I do feel Britain has lost its way on things like this.' [...]

Sheesh! Religious harassment? Where is Major Barbara when you need her?

How about this, for genuine religious harassment:

[...] Mr Elder-Brown was taking his girlfriend out to celebrate her birthday with her five year-old daughter last week when he was told he would have to leave his dog, Finn, tied up outside.

He showed a card issued by the Institute of Environmental Health Officers certifying he and his dog were allowed into any premises but an argument ensued and the owners threatened to call the police if he did not leave.

"It was humiliating and degrading, especially as there were a lot of people around me," he said.

"I was made to feel like a piece of dirt. They told me I couldn't come in because it was against their religious beliefs to have a dog in the restaurant.

"They then said I could leave Finn tied up outside. I stayed calm but when they threatened to call police I left."

He added: "It was horrible. It put a dampener on the whole celebration."

Under the Disability Discrimination Act it is illegal to refuse to serve a disabled person of give them a diminished level of service because of their disability. [...]

People are emigrating out of Great Britain in record numbers. Gee, I wonder why?

There is a dark side to this:

"One said she had been told it might also offend other religions."

Anyone want to guess which "other religion"?

The prize for getting the right answer is the realization that England is quickly going sharia.

This is truly a sad day from England. Makes me think of that song, "There's no England anymore." . . .

The English are not totally insensible to this. Many are sick and tired of it!