Is this book "The Shack" theologically correct? 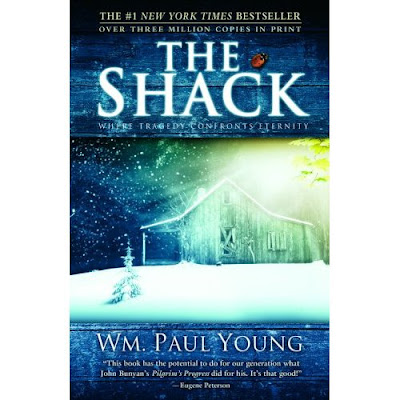 Is it supposed to be? Does it matter? I haven't read it, but it was recommended by someone in a Christmas card we received, so I looked it up on Amazon.com:

Product Description
Mackenzie Allen Philips' youngest daughter, Missy, has been abducted during a family vacation and evidence that she may have been brutally murdered is found in an abandoned shack deep in the Oregon wilderness.

Four years later in the midst of his Great Sadness, Mack receives a suspicious note, apparently from God, inviting him back to that shack for a weekend. Against his better judgment he arrives at the shack on a wintry afternoon and walks back into his darkest nightmare. What he finds there will change Mack's world forever.

In a world where religion seems to grow increasingly irrelevant "The Shack" wrestles with the timeless question, "Where is God in a world so filled with unspeakable pain?" The answers Mack gets will astound you and perhaps transform you as much as it did him. You'll want everyone you know to read this book!

It has over 2,000 customer reviews, giving it an average of four out of five stars. There are some sample pages to you can read from the forward to the book, and I read them up to the point where it stopped. It was interesting enough to hold my attention that long. Don't know if I would want to read the whole thing, as I'm not a fan of religious books generally.


When I looked it up on Amazon, the search also showed me this book:

Product Description
In this booklet I hope to guide you through The Shack. We will look at the book with a charitable but critical eye, attempting to understand what it teaches and how it can be that opinions about the book vary so widely. We do this not simply to be critical, but as an exercise in discernment and critical thinking. We will simply look at what the author teaches and compare that to the Bible.

This book had 14 customer reviews, that averaged out to be two out of five stars. Judging from the comments the reviewers left, many didn't care for the author's criticism.

In my youth I explored religion, and found it wanting. From Christianity I did learn some things of value, and they have stayed with me. The rest I discarded. As appealing as parts of it may be, I don't try to associate myself with the religious whole, because my beliefs would make me a heretic or a hypocrite. I also don't have a need to have everything explained for me; how can anyone explain away the ubiquitous ineffable? I'm content with The Mystery.

Where The Shack is coming from and where it is going, and whether or not I'll ever read it, I couldn't say. It does appear to want to tackle some tough questions, and perhaps from a spiritual perspective it could be interesting. But this book is being called "The Pilgim's Progress of our Times". I read Pilgrim's Progress, and hated it. It was interesting as anthropology/literature, but spiritually it seemed to embody much of what I don't like about religion, and stridently religious people.

I see faith as a personal matter. I'm not interested in religious arguments. I can't comment on a book I haven't read, so I won't. I'm just wondering if it's a book that would have appeal beyond a strictly religious audience? I've read that there are plans to make it into a movie, for general theatrical release. That implies it could have a wide appeal, unless they have to change it a lot for the movie.

The author of The Shack has a website at www.theshackbook.com. The book's index, "forward" and the first chapter are all available on-line there.

To goodness and wisdom we
only make promises; pain we
obey. ~ Marcel Proust

Funny that quote should come from Proust. But I think it is a most Christian quote. Pain we obey. Because pain is a teacher, motivator, healer. Pain makes us cautious and bold.

I am reminded very powerfully this week the motivating power of pain. Our house burned Sunday. In the space of 4 minutes our house was lost, but it still took the firemen five hours to put it out.

Should God take the smell of smoke from our clothes and hair?

Is it the job of God to make everyone live pain free?

No. Just no. I don't demand that God make my life painfree. I've read that children who can't feel pain are horribly deformed by their teen years. They repeatedly hurt themselves.

Walker,
I'm so sorry to hear about your shocking news. Thank God everyone got out alive. Thank God for volunteer firemen, and insurance.

I'll keep you in my prayers, that you are able to pull through this and restore your home quickly with all good speed.

Thanks Chas. I really appreciate it.