Lt. Uhura and I have something in common 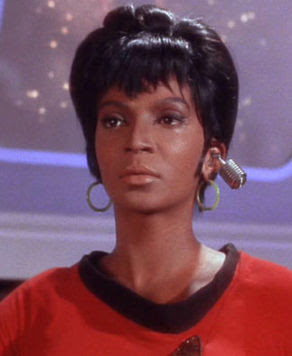 No, I haven't gotten big boobs or a red mini skirt. But like she, I too now have a silvery metal thing sticking out of my ear. Yesterday I got a bluetooth device to use with my cell phone.

I wasn't particularly keen on getting one. I had been using a wired earphone set with my old cell phone that worked just fine. But then our cell phone company, Edge Wireless, was taken over by AT&T.

At first, they changed nothing. But eventually, we got a letter saying they would be closing down the Edge Wireless net, and we would have to transfer to AT&T or lose our service.

When we went in to their office in town to transfer our account, they said we would need new phones, because our old ones were not supported. We got nice new Samsung phones, which were better than our old Motorola models. But my old wired earphone set did not work with the new phone, the plugs were different. Suddenly, I had to hold the phone when I was using it, and I missed having my hands free to do work while I talked.

I paid $8.00 for a wired earphone set for the Samsung phone, but everyone complained it was hard to hear me. The folks at the AT&T store suggested a blue-tooth device. They let me try it out in the store, and I got a decent Samsung model, the WEP 301, for $40 bucks. 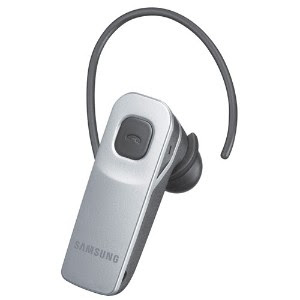 It seems I'm not the only one to make an Uhura-Bluetooth connection. Interestingly enough, Nichelle Nichols, the actress/singer who played Uhura, has herself been seen apparently using a bluetooth device at a NASA event: 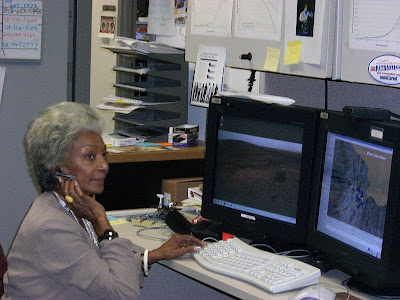 What can I say; everyone's doing it? But I didn't do it to be trendy, it's actually quite practical. I can tell you though, I won't have it glued to my head 24/7. But some people who do use cell phones a lot, wear them all the time. Probably because of the fear of brain cancer from constant exposure to intense radio waves so close to the brain, as well as the convenience of having one's hands free. But not everyone is happy with this new trend: 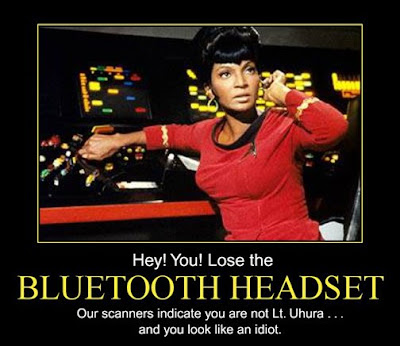 As weird as they look, I have a certain fondness for Bluetooth headsets because they always make me think of my childhood heartthrob Lt. Uhura, everyone's favorite communication officer on the Starship Enterprise. Besides being a pioneering role model for African-American women, her low-cut uniform and high-tech headset presaged the geek-chic look twenty-five years ahead of its time. While we may not be able to open a hailing frequency, or decode an Antarean sub-space transmission, with the Bluetooth headsets that have blossomed lately in so many ears, they certainly give us a taste of what the future may look like. And now that reality is bumping up against fiction, I've got mixed feelings about the whole thing.

... I find it hard to completely condemn those little headsets -- even though I don't own one. I certainly agree that the damned things look terminally dorky and are probably inappropriate in many of the situations people insist on wearing them. I wonder if one of the reasons you see people sporting those headsets in restaurants, bars and other social venues is because it's sort of like the old days when pagers were new and having one on your belt meant you were important (I seem to remember they were called chick magnets for a little while, although the term quickly shifted to electronic leash). Hopefully, the status factor will fade quickly so that half the people I see at my kid's lacrosse games won't look like the Borg with those chunks of metal and plastic jutting out of their skulls. [...]

The article goes on about people wearing them in "inappropriate" places. Apparently this annoys a lot of people. The guy who wrote this article was discussing it nicely, compared to some of the really nasty stuff other people have written elsewhere on the internet.

Well for me it's not a fashion statement, I'll be using it in the farmyard mostly, where only the chickens, ducks and dogs will see it. I doubt it will become a Borg-like attachment to me; I don't generally like to talk on the phone all that much. Fortunately I don't need to be on the phone that much as part of my job. But for someone who does, I can understand why they would wear it a lot.

Will practically everyone be wearing them eventually, most of the time, almost constantly "plugged in" to... whatever? I don't know. But I suspect, we shall see. Brave New World, and all that.

Cell Phone Dangers: how true are they?

I'm just wondering whether offending a chicken's sense of appropriate style is a PETA offense.

Hey! Chas! do you guys put up a Christmas tree? If so, how about a photo. I am looking for inspiration.

No tree this year, at least not yet. Don't know if we will.

I've got photos of Christmas' Past:

Not very unusual. Except maybe the cat in the tree, but I wouldn't recommend that. ;-)

Okay the cat cracked me up.