That was last night, when it was at it's peak: 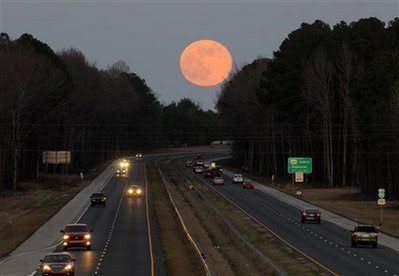 Look up tonight for a spectacular treat in the sky

If the full moon tonight looks unusually large, it is not your imagination – it is the biggest and brightest full moon to be seen for 15 years.

Each month the Moon makes a full orbit around the Earth in a slightly oval-shaped path, and tonight it will swing by the Earth at its closest distance, or perigee. It will pass by 356,613km (221,595 miles) away, which is about 28,000km closer than average.

The unusual feature of tonight is that the perigee also coincides with a full moon, which will make it appear 14 per cent bigger and some 30 per cent brighter than most full moons this year – so long as the clouds hold off from blocking the view.

The photo above was taken from Fayetteville, N.C. on Friday, Dec. 12, 2008. The moon should still appear large and bright for the next few days, so have a look if you can.