Is "Urban Farming" a new and growing trend? 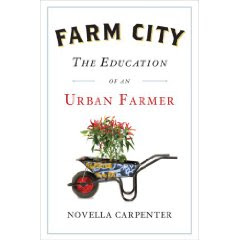 Apparently Urban Farming isn't all that new; it's been around for a long time. What is new is the renewed interest that people have been showing in it, as our nation's economy struggles, and many people desire to become more food-independent, using whatever land is available to them for farming. I've been reading more and more, articles about people fighting city ordinances so they can be allowed to keep chickens in their back yards, etc.

This renewed interest in urban and suburban farming helps explain the popularity of a book I heard about recently. The other night on the radio, I heard part of an interview with Novella Carpenter, who is flogging her new book:

Farm City: The Education of an Urban Farmer"
Here are some descriptions from Amazon.com's website:

From Publishers Weekly
In this utterly enchanting book, food writer Carpenter chronicles with grace and generosity her experiences as an urban farmer. With her boyfriend Bill's help, her squatter's vegetable garden in one of the worst parts of the Bay Area evolved into further adventures in bee and poultry keeping in the desire for such staples as home-harvested honey, eggs and home-raised meat.

The built-in difficulties also required dealing with the expected noise and mess as well as interference both human and animal. When one turkey survived to see, so to speak, its way to the Thanksgiving table, the success spurred Carpenter to rabbitry and a monthlong plan to eat from her own garden.

Consistently drawing on her Idaho ranch roots and determined even in the face of bodily danger, her ambitions led to ownership and care of a brace of pigs straight out of E.B. White. She chronicles the animals' slaughter with grace and sensitivity, their cooking and consumption with a gastronome's passion, and elegantly folds in riches like urban farming history.

Her way with narrative and details, like the oddly poetic names of chicken and watermelon breeds, gives her memoir an Annie Dillard lyricism, but it's the juxtaposition of the farming life with inner-city grit that elevates it to the realm of the magical. (June)
Copyright © Reed Business Information, a division of Reed Elsevier Inc. All rights reserved. 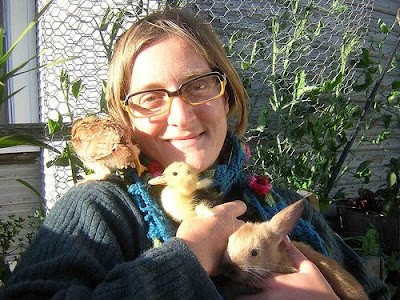 Product Description
Urban and rural collide in this wry, inspiring memoir of a woman who turned a vacant lot in downtown Oakland into a thriving farm.

Novella Carpenter loves cities — the culture, the crowds, the energy. At the same time, she can’t shake the fact that she is the daughter of two back-to-the-land hippies who taught her to love nature and eat vegetables. Ambivalent about repeating her parents’ disastrous mistakes, yet drawn to the idea of backyard self-sufficiency, Carpenter decided that it might be possible to have it both ways: a homegrown vegetable plot as well as museums, bars, concerts, and a twenty-four-hour convenience mart mere minutes away. Especially when she moved to a ramshackle house in inner city Oakland and discovered a weed-choked, garbage-strewn abandoned lot next door. She closed her eyes and pictured heirloom tomatoes, a beehive, and a chicken coop.

What started out as a few egg-laying chickens led to turkeys, geese, and ducks. Soon, some rabbits joined the fun, then two three-hundred-pound pigs. And no, these charming and eccentric animals weren’t pets; she was a farmer, not a zookeeper. Novella was raising these animals for dinner. Novella Carpenter’s corner of downtown Oakland is populated by unforgettable characters. Lana (anal spelled backward, she reminds us) runs a speakeasy across the street and refuses to hurt even a fly, let alone condone raising turkeys for Thanksgiving. Bobby, the homeless man who collects cars and car parts just outside the farm, is an invaluable neighborhood concierge. The turkeys, Harold and Maude, tend to escape on a daily basis to cavort with the prostitutes hanging around just off the highway nearby. Every day on this strange and beautiful farm, urban meets rural in the most surprising ways.

For anyone who has ever grown herbs on their windowsill, tomatoes on their fire escape, or obsessed over the offerings at the local farmers’ market, Carpenter’s story will capture your heart. And if you’ve ever considered leaving it all behind to become a farmer outside the city limits, or looked at the abandoned lot next door with a gleam in your eye, consider this both a cautionary tale and a full-throated call to action. Farm City is an unforgettably charming memoir, full of hilarious moments, fascinating farmers’ tips, and a great deal of heart. It is also a moving meditation on urban life versus the natural world and what we have given up to live the way we do.

Gosh. I find the book interesting, because I'm amazed that she has been able to do so much productive farming with a small city lot.

I live in the countryside, and we've been trying to turn our country home into a farm. I've lamented at times that we don't have more cleared land to work with. Yet, seeing what Novella has accomplished, I am greatly encouraged. If she can do so much with so little, certainly we can achieve something with the resources we've been blessed with here.

There was this comment left in the comment's section on the book's Amazon.com page:

As a reader, it was just a great read--fast and smooth, funny and informative, opinionated but not preachy--that even a non-farmer would appreciate. I am so impressed with the high road that Novella took by not engaging in political commentary. Although I am certain that she and I would agree very little about many things, she let the book speak to all the things we can have in common. Conservatives and Liberals will neither be baited or offended by this book. I admire that so much. I am not sure that I could have pulled it off.

As a dabbling suburban farmer in the Northwest, this book was both a source of encouragement and a justificaiton of our whacky, foul-filled backyard. I feel like I have a neighbor somewhere who gets it. I feel vindicated and motivated. I started out wanting some fresh eggs, now I am part of a movement! ;)

Boy, I would appreciate that too! I have strong interests in Tilth Farming and Alternative Medicine; two areas that attract a lot of people on the political Left. When researching information on these topics, one sometimes has to read through tiresome politically-correct diatribes, in the search for facts on relevant topics. I'm grateful to any author who stays on topic and spares me that. I'm quite happy to agree to disagree with folks about many things, and happier still if they don't try to shove their opinions down my throat.

Judging from a comment I read on her flicker photo, I suspect Novella's had her fair share of grief from militant vegetarians and vegans. I know I have. As a result, I'm grateful when people, in general, aren't too pushy with their opinions. Perhaps she is too.

At any rate, listening to her on the radio, it sounds like she strikes an even-tone, and has a fun sense of humor. And judging from the many other favorable comments on the Amazon page, the book is a most enjoyable read. It made it onto Oprah's Book List, so it must have something going for it. I'm looking forward to reading it.