I came across this photo recently, which I thought was pretty neat: 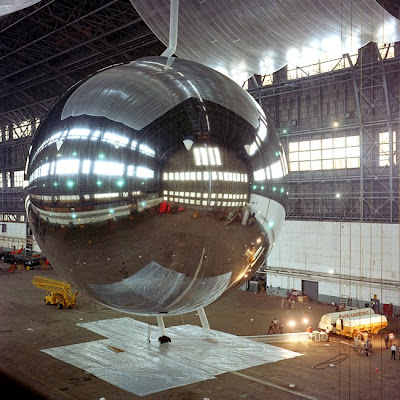 Look how tiny the people are in comparison. It was labeled "Echo 1" on site I got it from. It's one of the two Echo satellite series that NASA made in the 1960's. It's was basically a large reflective space balloon:

Following the failure of the Delta rocket carrying Echo 1 on May 13, 1960 Echo 1A (commonly referred to as just Echo 1) was successfully put in a 1,519 to 1,687 km (944 to 1,048 mi) orbit on August 12, 1960. The 30.5 meter (100 foot) diameter balloon was made of 0.127 mm (0.005 inch) thick metalized Mylar polyester film and was successfully used to redirect transcontinental and intercontinental telephone, radio, and television signals. The satellite also aided the calculation of atmospheric density and solar pressure due to its large area-to-mass ratio. As its shiny surface was also reflective in the range of visible light, Echo 1A was visible to the unaided eye over most of the Earth. Brighter than most stars, it was probably seen by more people than any other man-made object in space. Echo 1A reentered Earth's atmosphere and burned up on May 24, 1968.

Echo 1 was a passive communications satellite: it functioned as a reflector, not a transmitter. After it was placed in a low orbit of the Earth, a signal would be relayed to Echo, reflected or bounced off its surface, then returned to Earth. Echo 1 was visible to the eye because of its shiny surface, but also because of its low orbit; it would appear from below one side of the horizon, cross the sky, then disappear below the opposite horizon after crossing the sky, as happens with all LEO satellites. The spacecraft was nicknamed a 'satelloon' by those involved in the project.

I saw this photo in a magazine, where it was labled "Echo I", but this photo says 1965 in the file's name, so maybe it's "Echo II"? I've not been able to confirm it either way, but I still think it's a neat picture. I knew about the Echo satellites when I was a kid, but I didn't know they were inflatable balloons, and that they were so large.

There is another good photo at MSN's Encarta, which also has a photo of the smaller Telstar "active" communications satellite, which was made in 1962.

It's PAGEOS. You can look it up on wikipedia.

Echo I & II were predecessors of PAGEOS. Thanks for the clarification.