NASA's Mission to the Moon may be Scrapped 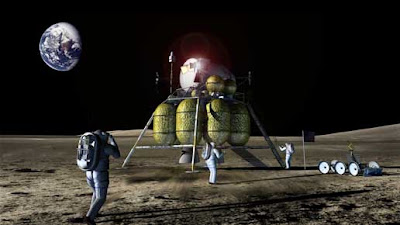 NASA doesn't have nearly enough money to meet its goal of putting astronauts back on the moon by 2020 -- and it may be the wrong place to go anyway. That's one of the harsh messages emerging from a sweeping review of NASA's human spaceflight program.

Although it is just an advisory panel, the Human Space Flight Plans Committee could turn the entire space program upside down. Appointed by President Obama and headed by retired aerospace executive Norman Augustine, the 10-person panel has held a series of marathon meetings in recent weeks to try to Velcro together some kind of plausible strategy for NASA. The agency's trajectory over the next two decades, as well as the fate of thousands of civil servants and private contractors, could be affected by the group's report, due at the end of this month.

The administration's overall attitude toward human spaceflight remains unclear. The president, both as a candidate and in the White House, has explicitly endorsed sending humans back to the moon, but his decision to create the Augustine committee is a sign that the status quo strategy, which carries the imprimatur of his predecessor, is not long for this Earth. [...]

Much blame is put on George Bush, for not supplying promised funding and allowing the Constellation program to fall seriously behind schedule.

Many Democrats would like to see the manned space program canceled, and use those funds for social programs. Yet look at how small NASA's part of the budget is:

NASA actually creates jobs, and technology innovations that find commercial application to improve life here on Earth as well. Compare NASA's portion of the budget to the huge areas of wasteful government spending on other areas of the budget that are completely out of control.

Read the whole thing for more information about the status of our space program, the various scenarios it's facing, and what may ultimately happen to it.

The bottleneck in space development is a commercial orbital vehicle - what the sguttle was sold as but wasn't. I would happily gut NASA if even half the money was to be put into X-Prizes, some of them for development of an orbital service.

I fear Obama isn't willing to settle for the other half.