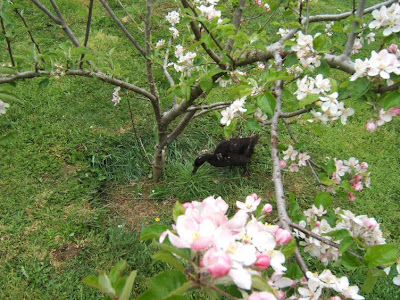 Our Indian Runner Duck, Miss Dilly, died Wednesday morning. She was listless and not eating for a couple of days beforehand. She often has gotten ill in the Summer, around molting time. I figured there was a Summer plant or insect that she would ingest that caused it. Each time she would recover, but not this time.

She was the last survivor of the pair of Indian Runner Ducks we got in 2006: 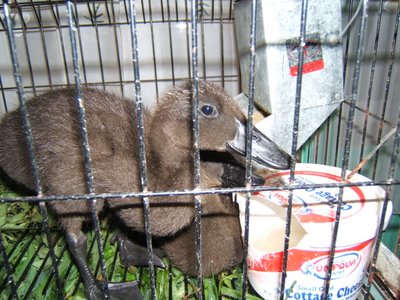 Pat and Andy bought them for me for my birthday. I always wanted to have some ducks, and these did not disappoint. They were adorable: 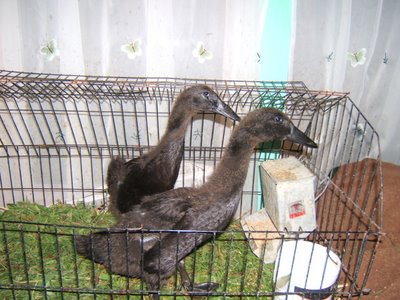 They ate like horses, and grew quickly. They would eat pieces of banana out of my hands; I became their mommy. They were very funny and amusing. 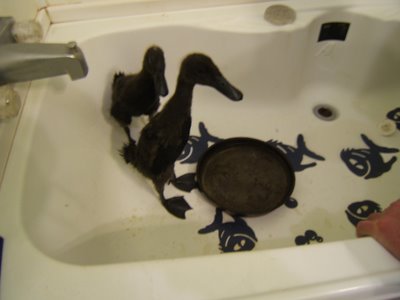 They aren't exactly "cuddly" like a dog or cat is, but they have a way of making you grow fond of them. We all got used to their ways, and they quickly became favorite pets. We named the boy "Daffy" and the girl "Dilly": 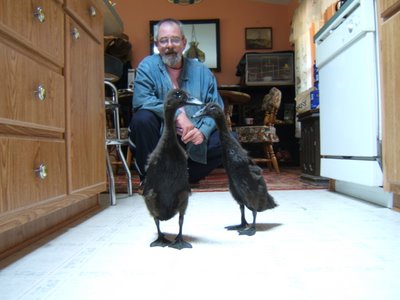 Domestic ducks seem a bit more intelligent than chickens, and have more of a personality. Ours quickly acclimated to being outside once the weather got warmer: 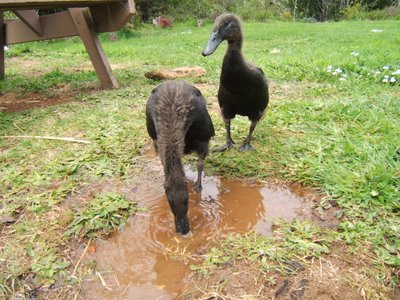 One of their favorite spots was the pool. Endless Fun, for them and us: 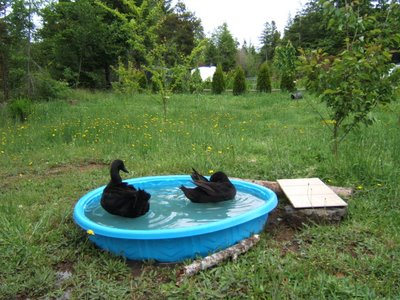 We built them a duck house, with an enclosed cage attached, and surrounded it with a fence and a gate. I would lock them in their house at night for safety. They seemed happy there. 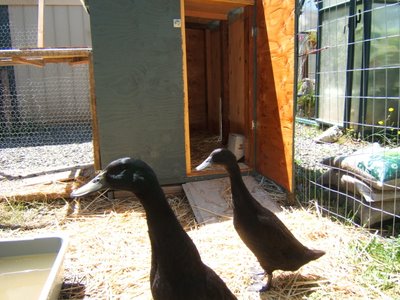 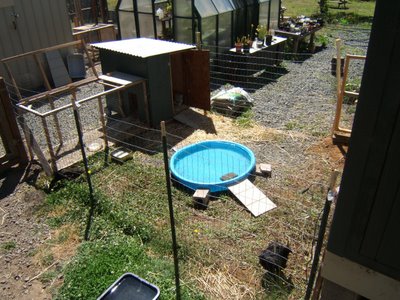 We eventually moved the pool inside the duck pen, so they could linger there in the summer evenings. Ultimately, that turned out to be not a good idea, for reasons I'll explain soon.

Daffy, the Drake, was rather aggressive about protecting Dilly. Once he bruised my arm. I held his beak tightly and scolded him; he never bruised me again. He did often get under my feet though, and would peck at my legs. He could be a real pest when I was trying to get work done. But often it seemed like he wanted to play, and it was fun.

But our smallest Chihuahua, Herbie, didn't think it was fun. That dog and the drake didn't like each other, and I had to keep them separated.

One day that first summer, I came home to find a bloody trail from the dog run fence, leading to the drake cowering in the duck house, with a bloody beak. I suspected that he stuck it through the fence into the dog run, and the chihuahua bit it. His beak was cracked, but fortunately it healed. I "duck-proofed" the dog-run fence, so no beaks would fit through the lower portion.

They got through that first winter just fine. 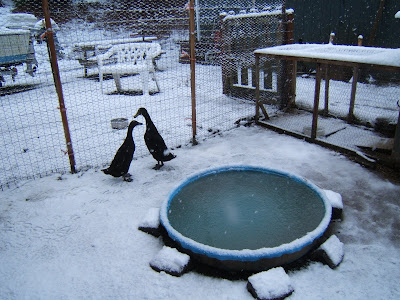 Daffy was very attentive to and protective of Dilly, and she thrived on the attention. 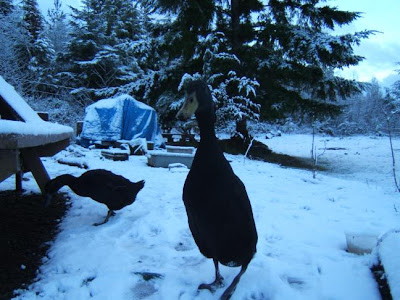 The following summer was beautiful. The foraging ducks loved to eat slugs and snails, which helped the garden tremendously. Dilly gave us many, many delicious green duck eggs. She got sick a few times, we think from something she ate, perhaps poisonous salamanders, we never found out what it was, but she always recovered.

I got into the habit of driving the ducks into their pen in the evening, then letting them linger in their wading pool till sunset, when I would lock them in their duck house for the night. Ultimately that proved to be tragic.

As summer slowly slid into autumn, as it does here, it started getting darker earlier. I should have locked the ducks in their house right at Sunset every evening, but I hated to chase the ducks out of the pool. Since the duck pen was near the back porch, I left the porch light on so they could stay out longer. The dog run was nearby, so I figured that with the light on and the dogs near by, the ducks would be safe. 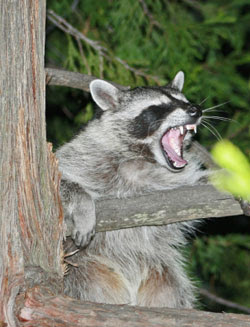 One evening, about an hour after sunset, I was going outside to lock the ducks up, when I heard Herbie barking frantically. I assumed he was barking at the drake, which he did sometimes. But when I got outside, I saw he was barking at our shed/shop. His bark had a frantic quality. I felt uneasy and rushed to put the ducks away, only to find, to my horror, that the drake was missing. Suddenly I realized, the dog was barking at the shed because something had got the drake and dragged it under the shed.

A raccoon had climbed over the fence into the duck pen. Daffy had dried to protect Dilly, and the raccoon ripped his throat open, then dragged the carcass over the fence and under the shed to eat it. My beautiful drake, who I had been playing with just that afternoon, was gone forever. 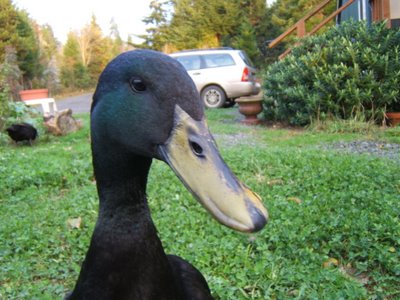 I didn't realize raccoons were hunters as well as scavengers. I found out the hard way.

Dilly, now alone, moped for quite some time after that. She walked around the farm for WEEKS, calling out for him. It was heartbreaking to hear it.

It was impossible to get more runner ducks at that time of year. A nearby farm was selling pairs of Mallard ducks, so we got a pair to keep her company.

I named the Mallards Dally and Dolly. They probably were not the best choice for Dilly. I suppose it was better than nothing, but the Mallards were into eachother, and took a long time to bond with Dilly. Eventually they all got along fine, but it wasn't like the relationship Dilly had with Daffy.

When summer came, Dolly, the Mallard hen, cranked out quite a few eggs. Dilly didn't lay any eggs. I thought ducks would lay eggs even if they didn't have a mate, but she didn't.

I had clipped the Mallard's wings when we got them, to keep them from flying away until they thought of our farm as home. When they molted the next fall (2008), they got their flight feathers back, and began to fly around the farm. It was glorious to behold! They started making afternoon trips away, to a nearby lake, I suspect. I didn't mind, because they always came back in the evening. But then one evening, the drake returned alone.

We never saw Dolly again. We suspect she was shot by a hunter, but we'll never know. I clipped Dally's wings, so we wouldn't loose him too. 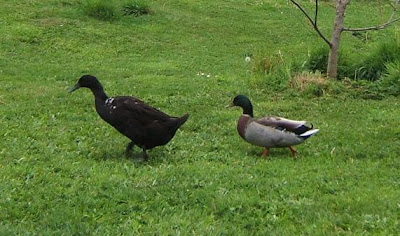 The Mallard and Runner Duck now made an odd couple. He tried mating with her in the spring, and I was going to let her hatch out a clutch, but again, she did not lay any eggs this summer.

Dilly also developed some white spotting on her feathers. I thought it odd, but she seemed healthy otherwise. But she may have had something wrong with her internally. She got weak over a period of a few days, and by Wednesday morning, she died.

I don't generally get all that sentimental about birds, but the Runner Ducks were an exception; they were almost like dogs. 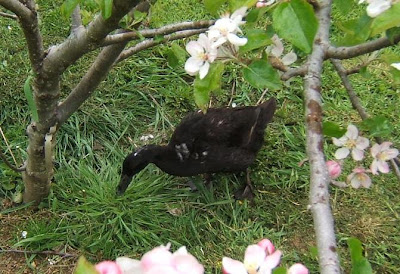 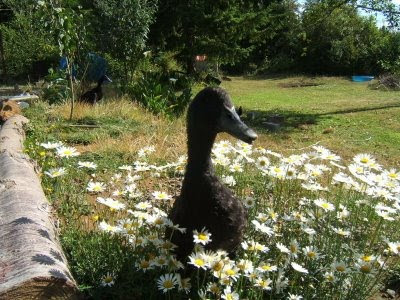 My Wonderful Runner Ducks. Thanks for the memories, I will miss you.

I had read that runner ducks can live 12 to 15 years. I fully expected ours to. I resolved to take good care of them, but my inexperience with predators got the one, and I'm not sure what got the other. The farmer part of me looks for an organic cause; the poet part of me thinks she died of a broken heart, having lost her ideal mate when Daffy was killed.

Advice for new duck owners who may be reading this: I read that most domestic ducks die from dog attacks, and that one should never leave a duck alone with a dog, no matter how well they seem to get along. So I didn't leave them alone together, but I also didn't anticipate the duck sticking his beak through the fence, looking for trouble. Make sure the lower part of a fence has wire mesh with holes small enough to prevent that.

And I would suggest you ALWAYS lock your ducks up in a safe, predator-proof enclosure after dark. Don't let your pet be a literal "sitting duck" for a hungry animal. Wild animals will always search for the weakness in your defenses, be it bad fencing or just plain carelessness. Be vigilant.

Now I have one duck left, the Mallard Drake. I would like to find him a female or two, but it's hard to do this time of year. We were given the number of someone who has more Runner Ducks, but I don't think I want to try them again.

I wasn't crazy about the Mallards when we got them, because I hadn't raised them from when they were babies, and they weren't very tame. They didn't like being touched, and would not eat out of my hand. But on the plus side, they didn't get underfoot while I was working; they didn't taunt or attack the dogs. The female was a great egg factory. And they were pretty smart about what they ate; nothing local seemed to make them sick. They are pretty and pleasant to have around.

And since we have one now anyway, the path of least resistance might be to stick with them and try to get more. We'll have to see what we can do. 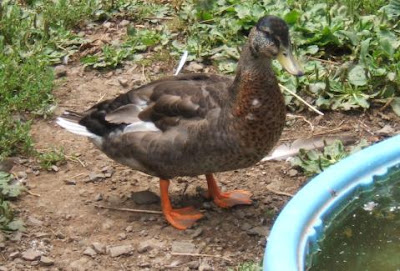 Dally, the molting Double-Widower, Lone Survivor
Posted by Chas at 11:41 AM