The French go about their business as usual 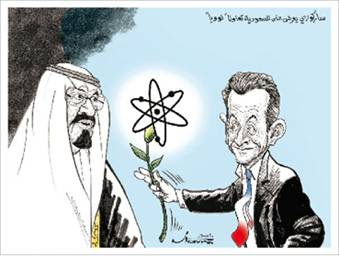 [...] This is the sixth Muslim-Arab country Sarkozy has visited (if my count is accurate) to whom he has either promised or given nuclear energy for peaceful use. Libya, Morocco, Algeria, Egypt, Jordan and now Arabia. He is scheduled to visit the Emirates where he will make the same offer.

This is the first time I recall him saying that nuclear energy is a right. It’s quite a sweeping statement. He means, of course, for peaceful purposes, but the underlying potential for something far more sinister cannot be disregarded.

Business was also part of his agenda. Besides a criticism of the price of oil, which he considers to be too high, Nicolas Sarkozy promised, on leaving Ryad, “large contracts” for French businesses, and spoke of “potentially 40 billion euros,” especially in armaments.

It might be worthwhile to point out that the news reports mention nothing about Sarkozy having criticized the treatment of Christians in Saudi Arabia. He was critical of the price of oil, and discreetly critical of the condition of women, but not a word on the fate of Christians. [...]

France has an agenda very different from the Anglosphere. This isn't surprising. It just must not be forgotten.

We hear so much about how "conservative" France's President Sarko is. Yet what they mean by conservative is very different from what we believe the term to mean. Here is another article by Tiberge. And the title isn't referring to Sarkozy's sex partners:

Who Is Sarkozy in Bed With?

[...] Nicolas Sarkozy has no interest or affinity for ANYTHING that isn't left-wing. Yes, he’s accused of being a “capitalist” because he sails on the yachts of his rich friends. And he’s accused of being friendly to religion because of ONE speech he gave in Rome (that will turn out to benefit Muslims, most likely). And he is accused of being an ARCH CONSERVATIVE because he wants to deport 25,000 illegals a year, allowing the remaining 575,000 on French soil to collect welfare. [...]

The article reports on an event in France where Tony Blair made a very socialist speech (and btw, say's in America he would be a Democrat), and was joined by Sarkozy on the stage, who praised the speech of his fellow socialist.

And then there is Sarkozy's ideas of freedom of religion... read the whole thing. It's not long, and full of insights. I don't find this surprising; one expects socialists to be socialists. It's just important to remember that what's called conservative in Europe is... not what we would call it. And France is definitly marching to the sound of a different drummer, as they are about to take the lead of the European Union. I see the potential for France to make a lot of big messes.