The Real Mitt Romney? Is he electable? 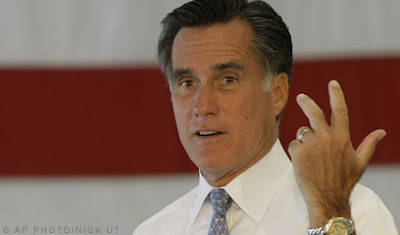 “The Mitt Romney I know”

[...] I spent a lot of time with Mr. Romney that year, and I occasionally served as his volunteer driver, taking him to local campaign events. The Mitt Romney I got to know was warm and likable. He had an electric intelligence. He was unfailingly decent. He was totally committed to his family. He treated everyone with respect and kindness.

If you’re like most politically attuned Americans, you probably don’t agree with my description of Mr. Romney. You may consider him to be the personification of political ambition. You possibly believe he will say anything to get elected president. You might even consider him one of the least honorable politicians in the country.

As a longtime admirer of Mr. Romney’s, it pains me that many Americans believe these things. [...]

Follow the link to read the rest, including a convincing rebuttal to the claim that this is just political spin. I don't see any reason to believe it's not true.

Below is a photo of the Romney's, with their children (five sons), their wives, and the eight grandchildren: the extended Mormon family: 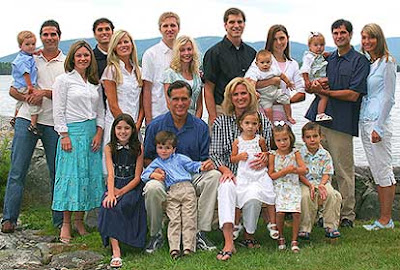 There has been talk about how electable he is, because of his Mormon religion. Personally, it's not an issue for me, but I have posted about it previously, because it would seem to be a concern for some people.

I came across this article in Meridian, an on-line LDS publication. It's an interview with Mitch Davis, an LDS filmmaker, who makes some interesting observations about Mitt making a bid for the presidency. It seems the interview was done before Mitt announced he was running, but it directly addresses the Mormon question, and some of the ways it might be dealt with. Some excerpts (bold emphasis mine):

Could a Mormon really become the President of the United States?

[...] MITCH: Right now the single largest impediment to Mitt’s election seems to be a widespread, negative impression of Mormonism. 35% of those polled nationwide by The Los Angeles Times said they could not vote for a Mormon for president. We conducted our own poll in South Carolina and got a 33% negative response to that same question.

We then asked South Carolinians why they felt so negatively about Mormonism. We didn’t have to go very far: 44% of them believe Mormons still practice polygamy, 50% believe we worship Joseph Smith, 27% think we don’t believe in the Bible, and 25% believe we are not Christian — with another 50% undecided on the topic.

On their face, those are very disappointing numbers. But I think they are actually good news for Mitt. They tell us that the basis of anti-Mormonism is ignorance rather than simple bigotry, and we can address ignorance.

MITCH: We are going to produce a series of television ads that show who Mormons really are and why nobody should be afraid to elect one as President of the United States. Depending on funding, we will run billboards and newspaper ads as well. We just have to get rid of this widespread ignorance that breeds widespread fear.

MERIDIAN: Is it really possible for a grassroots organization to have that much impact on a national election?

MITCH: Absolutely! We modeled our organization after two groups: The highly conservative, “Swift Boat Veterans for Truth” and the ultra-liberal, “MoveOn.org.” Both have been extremely effective in having major impact on major elections the last few years.

MITCH: Let’s just say there are a lot of successful Mormons out there whose religion has not stopped them from stepping onto the world stage and performing at the highest level; athletes, musicians, business leaders.

MERIDIAN: Wait a minute! You’re going to use Harry Reid (a Democrat) to campaign for Mitt Romney (a Republican)?!

MITCH: We’re going to use every arrow we have in our quiver, and we have quite a few.

MERIDIAN: Any landmines you need to avoid?

MITCH: Our biggest concern will be finding a way to address the issue of anti-Mormonism without fanning those same flames. The last thing any Evangelical Christians want is to feel that by voting for Mitt Romney, they are voting for or promoting Mormonism.

MERIDIAN: Why are Evangelical Christians so key to this election?

MITCH: Because they wield tremendous influence in the Republican Party, and throughout the South.

MITCH: Jerry Falwell just stated that he wouldn’t have a problem voting for Mitt Romney, and Christian Broadcast News did a positive piece on him three or four weeks ago. You can find links to all of this stuff on our site.

MITCH: Don’t leave home without it.

One thing I have learned, as I've read more and more about the Evangelical community in the US, is that they shouldn't be seen as a big monolithic group that agrees on everything. They might well agree on many issues, like abortion, but even there they might disagree about strategies to deal with it. Evangelicals can be a diverse group, with diverse options about a lot of things. About how the majority of them would feel about voting for Mitt Romney, I can't say. But I do see some sense in Mich Davis' strategy for getting the word out. Give people the facts, so they can decide.

Mitt is not my first choice; I'm backing Fred Thompson for president. Yet there is no denying that Mitt is a major player, and if he doesn't succeed in getting the presidential nomination, he might still succeed in another role... perhaps as Veep? Whatever happens, he's still in the running, and I'm not counting him out.
Posted by Chas at 12:48 PM