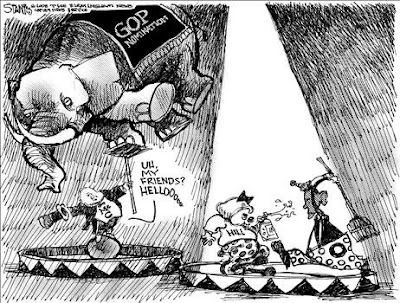 While the Obama - Clinton sideshow continues, dominating the Media Spotlight, the Democrats fight dirty by using every ploy available to them to try to tar John McCain with allegations of illegal campaign finance activity:

The irony is, they are suing the FEC for being non-functional. The FEC is non-functional because it has only two commissioners, not the needed four. There are only two because the Democrats have been blocking White House nominees for the commission since December 2005. They've even blocked a Democrat nominee. They are basically suing over a problem they have created and continue to perpetuate.

John McCain is being accused of exceeding spending caps, when he hasn't received a dime of public money. He filed an application, then withdrew it. The Democrats maintain that's a crime, while simultaneously making it impossible for the FEC to investigate. They cause the problem, then posture themselves as fighting for the solution. Typical Democrat BS posturing.

Meanwhile, Obama accepts funds from a sleazy lobbyist group, even as he claims he does not accept money form lobbyists:

Obama Took Money From Abramoff Firm? The Hell You Say!

That's a real story, more interesting than the Democrat's manufactured self-created drama with the FEC. We have more than enough of these Democrat clowns in the Congress and Senate, let's not put one in the White House too. John McCain would be a much better, serious choice.