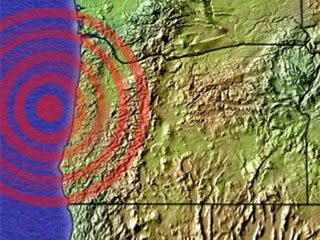 By JEFF BARNARD, Associated Press Writer
GRANTS PASS, Ore. (AP) - Scientists listening to underwater microphones have detected an unusual swarm of earthquakes off central Oregon, something that often happens before a volcanic eruption - except there are no volcanoes in the area.

Scientists don't know exactly what the earthquakes mean, but they could be the result of molten rock rumbling away from the recognized earthquake faults off Oregon, said Robert Dziak, a geophysicist for the National Oceanic and Atmospheric Administration and Oregon State University.

There have been more than 600 quakes over the past 10 days in a basin 150 miles southwest of Newport. The biggest was magnitude 5.4, and two others were more than magnitude 5.0, OSU reported. [...]

I've not felt any quakes. A ship is being sent out to take water samples. There are some other things that make it unusual... see the rest of the article for more details.