I have three funnies today, that happen to coincide with the "Top of the News" column on my iGoogle home page. (the comics came from Townhall.com) 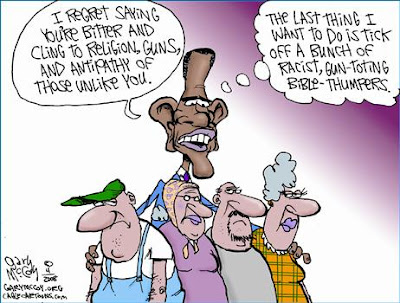 [...] Local people called the Illinois senator arrogant, unpatriotic and un-Christian after his remarks that residents of small towns in Pennsylvania and elsewhere are bitter because of job losses, and so have turned to traditions like guns, religion and anti-immigrant sentiment.

"He is saying people are weak, dumb and naive, and they are seeking religion as a way of getting through," said Darwin Whitmoyer, 54, a white truck driver, at the gas station in this town of about 100 people 150 miles northwest of Philadelphia. "He didn't help himself." [...]

This has hurt Obama in gallup polls, but as of today, it seems his rating in the Daily Gallup poll is slowly starting to rise again. Just when I thought reality might make a difference... Do people have short attention spans? Do polls lie? Or is it a bit of both, or something else too? 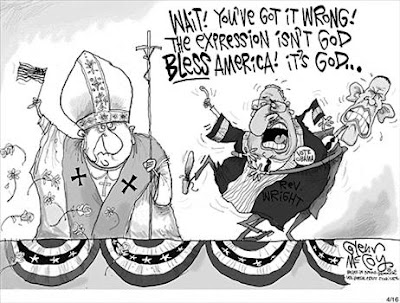 It was an impressive turn out, the stadium was full. Tickets had sold out shortly after they were offered, if there had been a larger venue is seems that many more people would have attended. Some people insist the Catholic Church is dying. From what I saw on Sunday, I can only say that it sure isn't dead yet.

It all seemed to go quite smoothly. According to one woman's account of the event, security was very tight. 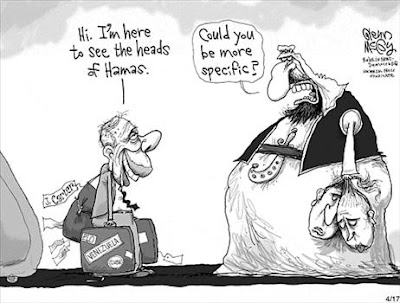 Carter Says Hamas May Accept Right of Israel to Exist

Oh come on. How often have they said this? They "hint" that they "might" accept Israel; the West then offers them money, they take the money, which satisfies them... for about 15 minutes. Then they announce it's not enough; they need MORE money if there is ever going to be peace. It's an ongoing game of extortion. Meanwhile, the money is used to support them while they continue to wage war.

This game has been going on for decades. They keep playing them game, because it's lucrative. And it's fools like Jimmy Carter that encourage them to keep the game going. He's their favorite useful idiot.

Really, does this sound like people who want peace? Only to Jimmy Carter and other pie in the sky Lefties.