This is the ad that's created such a fuss? Why? It just reminds everyone of what kind of Church Obama has attended for 20 years. What part of it isn't true? It makes perfect sense to preach "God Damn America" if you hate this country and think it's bad and evil. It also makes perfect sense to attend a church that teaches that if you agree with it. Duh.

I see Bill Moyer's (who has a long history of activism with the American Communist Party and related groups), did a softball interview with Rev. Wright, who insisted his comments were taken out of context. It begs the question, "What context makes 'God Damn America' a good thing to say?"

I fear I know too well. I lived in San Francisco for 23 years, and many people there agree with Wright. Many of them also happen to be communists and hard core socialists (or their overly emotional, easily manipulated "useful idiots"). They believe that America is evil because it is capitalist, and cannot be redeemed, until it CHANGES by renouncing capitalism.

Rev. Wright preaches Liberation Theology, which is Marxism dressed in religious clothing. Obama's church teaches that "middle classness" is wrong. Can you imagine what kind of "change" it is that Obama wants to bring about? 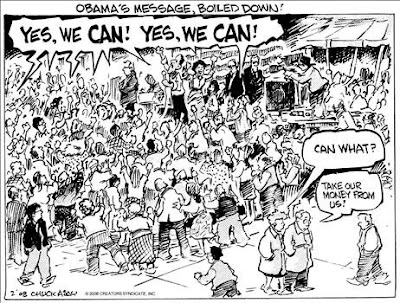 God Damn America? How about God Damn the main stream media, for refusing to talk openly and honestly about what Wright and Obama really believe?

The comments made by Wright are nothing compared to Obama's actual ties to terrorists and terrorist groups:

Barack and Michelle and Bill and Bernardine: The Obama/Weather Underground compendium

And lets not forget his leftist foreign policy advisers, who're themselves foreigners:

A thorough examination of these would do a lot to put "change you can believe in" into context. But don't hold your breath waiting for the MSM to tell you.

Rev. Wright maintains that "God Damn America" was taken out of context. It's that's true, then seeing the whole sermon should remedy that. And now you can see the whole sermon, on-line:

Does the context change the meaning? See it and judge for yourself.